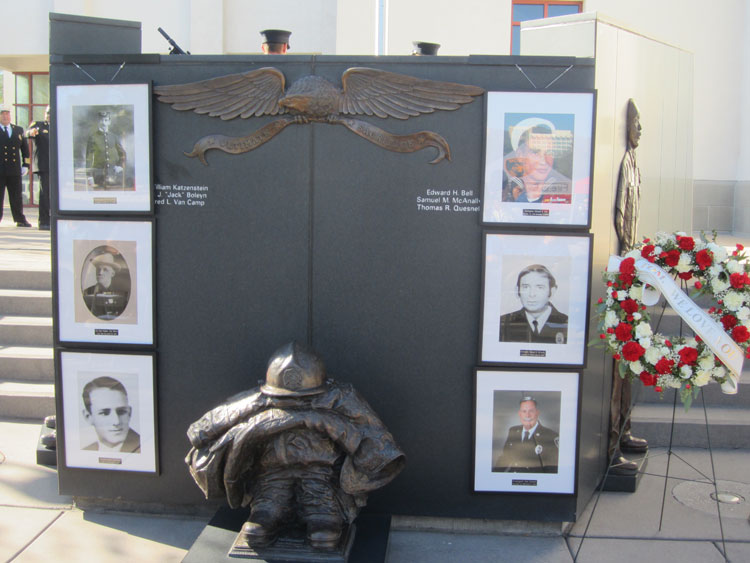 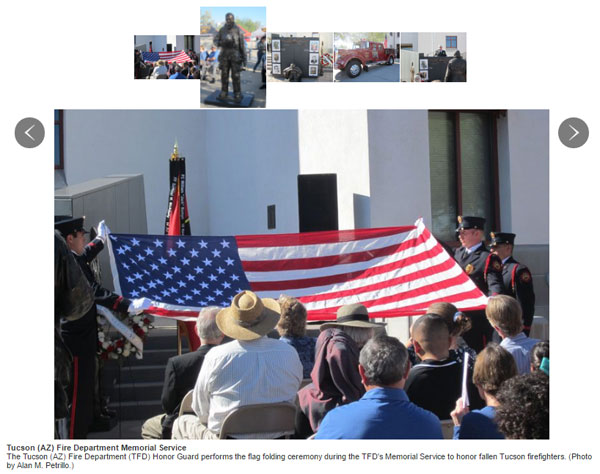 CLICK ABOVE FOR A GALLERY FROM THE MEMORIAL SERVICE >>

Tucson (AZ) Fire Department conducted a firefighters’ memorial ceremony in early November to honor firefighters who have died while on active duty, in the line of duty, and after retirement. 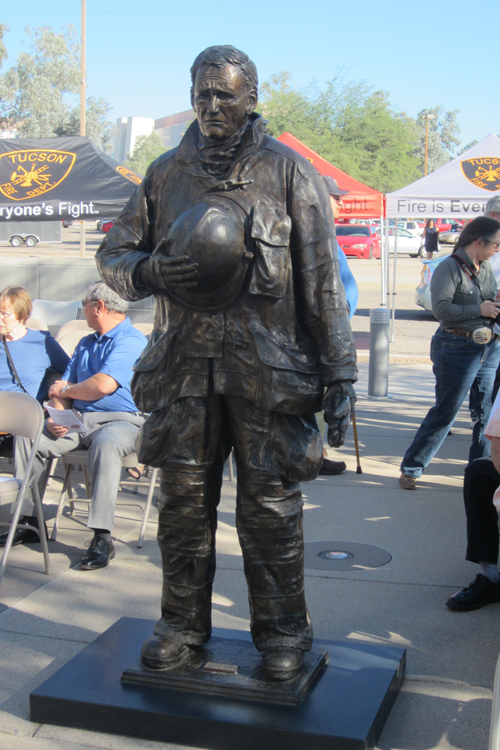 Firefighters who died after retiring from the department also were among those honored at the ceremony. They were Engineer Don Schwarzman, who died in 2005; Firefighter Norm E. Hall (1994); Battalion Chief Frederick K. Ruyner (1984); Battalion Chief Eugene Velasco (1984); Inspector William J. Martin (1980); Engineer Wilfred Discher (1978); and Captain Albert B. Aguilar (1973).

The ceremony was conducted at the firefighters’ memorial located outside the main entrance to Fire Central, also home to a five-bay station, in downtown Tucson. The memorial features a life-sized bronze statue of a firefighter, created by local artist and former Tucson Firefighter Paul “Oly” Olesniewicz.

A granite wall stands at the far end of the monument and is engraved with the historical milestones of the department and the names of those who died in the line of duty. A second bronze statue of firefighter turnouts is placed in front of the wall, and the walkway surrounding the monument is paved with personalized commemorative bricks purchased by members of the community.

Tucson Assistant Chief Joe Gulotta gave the welcoming and closing remarks, an invocation was given by Chaplain Mike Coyle, and the bell ceremony was performed by Firefighter Mario Carrasco. Chief Jim Critchley made remarks to the assembled guests, as did Tucson Firefighter’s Local 479 President Josh Campbell. The keynote speaker was Brian Jeffries, president of Professional Fire Fighters of Arizona (PFFA).

A Tucson Honor Guard and Pipes and Drums procession was performed, and Brittany Mazur sang the Star Spangled Banner and Not a Day Goes By. Refreshments were served in the fire station after the ceremony.