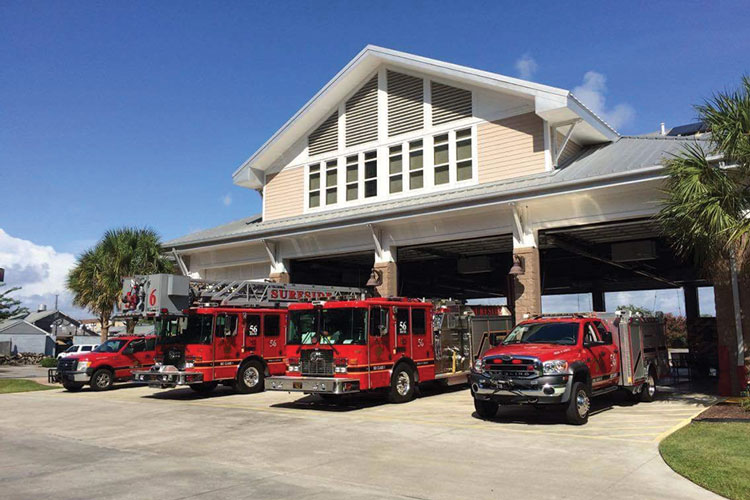 When DP3 Architects Ltd. of Greenville, South Carolina, sat down with its new client at the other end of the state, the town of Surfside Beach, it faced working out a master plan for renovating or building a new fire station, police station, town hall, and civic center on a single site.

Once it completed the master plan for the town, planners decided to focus on a new fire station as the building that would define the vision for the future of the entire campus.

Michael T. Pry, AIA, LEED AP, senior associate at DP3 Architects, says his firm was provided with single-line plans drawn up by a firefighter showing a building of about 25,000 square feet that included a lot of town functions beyond firefighting. “We did an assessment of the town’s space needs and drew up a preliminary site master plan for the campus to include the town hall, police station, municipal court, citizen wellness center, and fire station,” Pry says. “After looking at the budget, we suggested focusing on the fire station only.”

Pry notes that DP3 Architects considered a one-story fire station option but discarded that idea because of the land needs for the other buildings on the campus. “We decided to go vertical instead of horizontal with the fire station,” he says. “The final design came in at 14,275 feet, encompassing two full levels and two half mezzanines that create a third floor in the building.”

DP3 Architects also faced trying to fit a three-story building into the small beach community because the site sits eight blocks away from the Atlantic Ocean. “We tucked the third floor, where the dormitories are located, under the building’s roof,” Pry points out. “The apparatus bays are on the ground floor, and with the two-story volume of those bays we created two mezzanines, one on each side of the apparatus bay space.”

Kevin Otte, Surfside Beach Fire Department chief, says the department outgrew the old station, which was built in 1964, in terms of space and training facilities with its four single-deep apparatus bays. “We wanted double-deep drive-through bays on the new station; a separation of male and female dormitory quarters; and a large training room, which would double as the town’s emergency operations center,” Otte says.

The new station has administrative offices on the ground floor for the fire marshal, training captain, and public education captain, Otte says. Other fire officer offices are located on one of the mezzanines, while the other mezzanine holds storage rooms for bunker gear, a self-contained breathing apparatus (SCBA) training maze, and other training props.

Pry says that the ground-floor level has four double-deep apparatus bays along with a dedicated decon room “where firefighters can strip down, shower off, and put on clean clothes so they don’t carry contaminants with them into the station.” The decon room is adjacent to the apparatus bays, as are a separate laundry room and a turnout gear storage room.

“The apparatus bays have AirHAWK MagneGrip auto-sensor exhaust systems that capture engine exhaust gases and six air scrubbers that run for 20 minutes whenever they open the apparatus bay doors,” Pry notes. An air cascade system for refilling SCBA bottles also is located on the first floor.

Terry Grady, Surfside Beach engineer, says the third floor holds the station’s dorms, restrooms, chief’s office, kitchen, dining area, fitness room, and library. “The two dorms each have six rooms on each side of a doorway to the main dorm hallway. Male and female restrooms are accessible from both the dorms and the hallway.”

Otte notes that the station has a brass fire pole protected by hydraulic doors that open fold-down doors when the safety gate is opened.

One of the challenges facing DP3 Architects in designing and building Surfside Beach’s station was the need to keep the 1964 fire station operating during the new one’s construction. “We had to build adjacent to the old fire station and remove a metal garage attached to the old station to allow us to build within 10 feet of it,” Pry says. “We phased the construction of the new station so the apparatus bays were completed first, allowing Surfside Beach to move its apparatus into the new station and respond from there so we could then tear down the old station.”

Another challenge was that the site didn’t have enough room for the new station, so the town had to close down a street, First Avenue, which ran alongside the town hall, to allow the apparatus bays to exit out that way. “Secondary calls could exit through the back of the station closer to the beach,” Pry observes. “And, we also had to make all four sides of the station look pleasing because it was visible from four directions.”

Total cost of the new Surfside Beach fire station, including the site work necessary to close down First Avenue, Pry says, was $2.1 million. The station was given an award for its design by the Fire Industry Education Resource Organization (F.I.E.R.O.). “The Surfside Beach fire station set the architectural tone and style for the future buildings in the town’s master plan,” Pry notes. “Those other buildings will be complementary to it.”