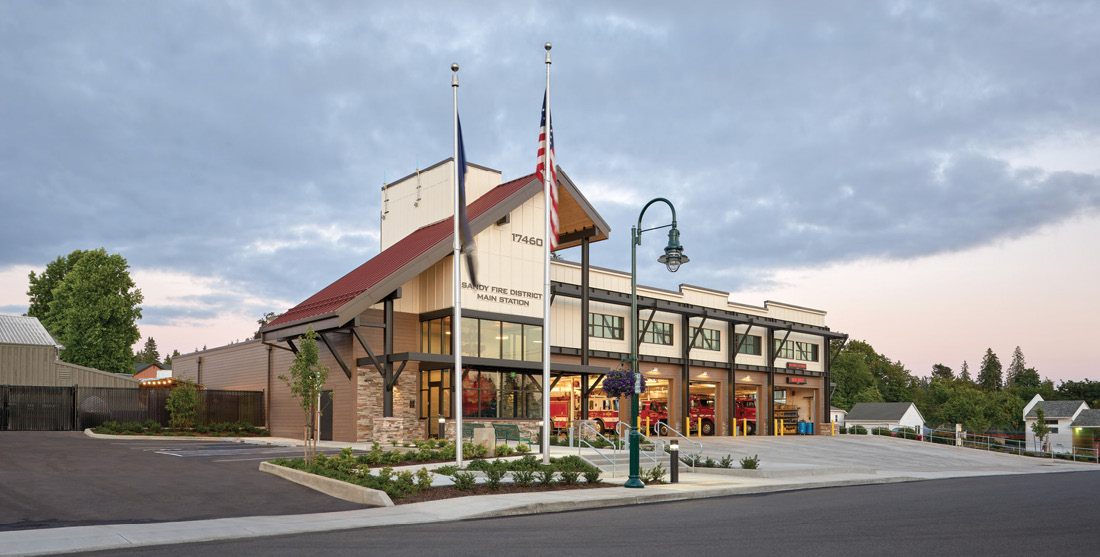 The main fire station of Sandy (OR) Fire District No. 72 is a one-story block building built in 1967 that had a second story added in 1981 at a time when structural stability in earthquakes was not as major a concern as it is today.

The fire district had a study done to investigate the seismic stability of the station and learned that in an earthquake, the second floor would likely collapse into the five apparatus bays on the first floor, rendering the entire station and the apparatus it contained useless. Fortunately for the fire district, a couple of grants, funds from the city, and fire department money were put together to renovate the main station, give it a new design, and make it able to withstand a seismic event.

Phil Schneider, Sandy Fire District’s chief, noted that the main station would be an assembly point for emergency services and shelter for the community in case of an earthquake, so it was imperative to harden the structure to withstand seismic activity. “We were awarded a $1.2 million grant from the state through Business Oregon and a $1 million grant from an Urban Renewal fund,” Schneider says, “and we were able to add to that money funds from the city and the fire department to come up with a total of $6 million for the land and to renovate the station. Taxpayers were extremely happy because there was no bonding or tax increase.”

2 A front view of the main station before its redesign and renovation.

Schneider notes that the fire district covers 25,000 people living in an area of 77 square miles in northern Clackamas county, operating out of three stations through a combination department of 16 paid and 50 volunteer firefighters. “As part of the Business Oregon grant, we had to redo that 20-year-old seismic study,” he says, “and we hired Mackenzie Architecture to do that new survey because they have a good reputation in designing and building a lot of fire stations.”

Jeff Rhys Humphreys, Mackenzie’s director of architecture, says that once Sandy Fire District got the grant to fund the necessary design and construction costs to retrofit the station so it would be seismically stable, the district asked Mackenzie to look at some other deficiencies in the station. “They wanted us to address them from the space and operational flow standpoints,” Humphreys points out. “We did a needs assessment and came up with a number of findings that included improvements like reworking the lobby so the rest of the station was secure from it, handling some challenging grade changes in the floor of the old station, and removing an old hose tower.”

Schneider says that firefighters operated out of temporary quarters for two years while the main station was being renovated. “We put trailers in the station’s parking lot and administration stayed there,” he says. “The school district loaned us land for two years for free where we built two 30- × 40-foot barn-style structures for our apparatus and bought a manufactured home with five bedrooms, a kitchen, a living room, and an office. We sold all the structures when we were able to get back into the main station.”

Humphreys notes that Mackenzie ripped off the entire second floor of the main station, gutted it, and rebuilt it. “The second floor had some odd geometry in its layout, where the bunk rooms were semi-private with individual rooms with walls and bunk beds. The district wanted a separation of individual bunk rooms to better accommodate its staff, so we ended up making nine bunk rooms, along with a storage room that could be converted to a bunk room in the future.” Each bunk room has a bed, a cabinet for personal effects, a desk, and an operable window to regulate air flow and temperature. Every two bunk rooms are linked to one thermostat that is zone-controlled.

4 Firefighters work in an office area.

5 The kitchen and dining area.

“We also had to clean up some egress issues from the bunk room area,” Humphreys says, “and we designed five unisex toilet shower rooms with a combined locker area in a nearby hallway.” On the second floor are a kitchen and day room, a dining area with a rooftop-covered patio, a training room, a work room for staff, and a fitness room with outside daylighting and an operable window. He adds that Mackenzie also added an elevator to the building, redeveloped the stair in the lobby area, improved a stair into the apparatus bays, and retained the station’s two fire poles.

On the first floor, Mackenzie added new columns and footings in the three double-deep and two single-deep nondrive-through apparatus bays and renovated and reconfigured a series of administrative offices and a conference room, a turnout gear room, and an EMS storage room.

Humphreys says Mackenzie designed a structural frame on the outside of the building to strengthen it but also to be an interesting feature of the building’s exterior design. “The exterior is all durable materials, including a stone base, steel beams, sealed wood on the underside of the eaves and the roof line, and durable painted cement board,” he notes. “The pitched roof uses standing seam metal roofing with snow guards, while the rest of the structure has a low-slope single-ply roof where we added upgraded insulation to allow it to perform better from an energy standpoint.”