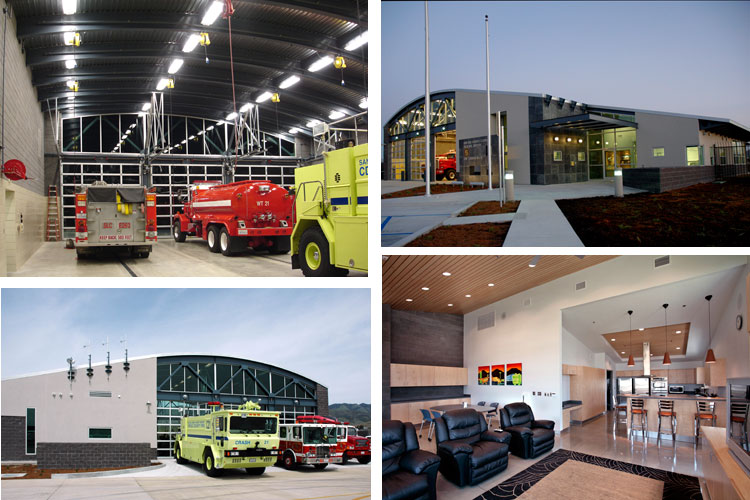 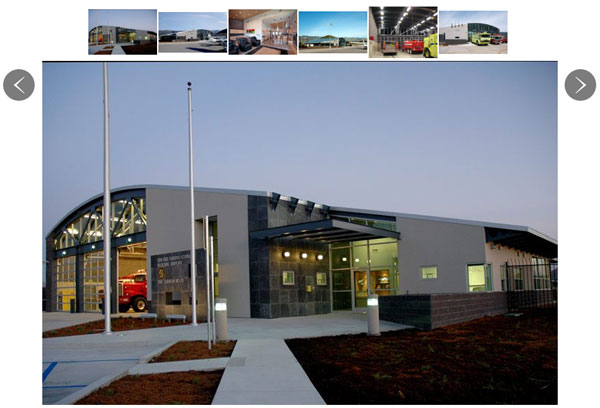 CLICK ABOVE FOR A GALLERY OF THIS FIRE STATION >>

The San Luis Obispo (CA) County Regional Airport Fire Station is unusual in a couple of ways: It is unique in its design that is fashioned like the wing of an aircraft, and it functions as the station for airport aircraft rescue and firefighting (ARFF) response, as well as municipal fire protection for the southern and eastern parts of the city of San Luis Obispo.

“This county station is a contract station with CALFIRE,” says Mark Cameron, CALFIRE captain. “What we call the red side has county-owned fire apparatus, while the green side has airport-owned apparatus. All of our firefighters are cross-trained and ARFF-qualified to meet the requirements for an ARFF Index B airport, which means the largest aircraft we get on a regular basis are 90-passenger regional jets.” The airport handles approximately 20 commercial flights and 100 general aviation flights daily.

The 9,500-square-foot station apparatus room has three bays, double deep, that accommodate both municipal and ARFF apparatus. The $2.8 million station was funded with 50 percent of the money coming from a Federal Aviation Administration (FAA) grant, and the other half from San Luis Obispo County.

The municipal apparatus include a 2009 Smeal Type 1 engine with a 1,500-gallon-per-minute (gpm) pump and 500-gallon water tank; a 2007 West-Mark International 7600 chassis water tender with a 1,000-gpm pump and 2,500-gallon water tank; a 2009 SVI Trucks heavy rescue carrying a Type 2 urban search and rescue (USAR), Type 2 swift water, and medium mass casualty incident (MCI) complements; and an inflatable boat with a 30-hp outboard motor. The ARFF fleet is made up of two Oshkosh 1,500-gpm ARFF vehicles and a mass casualty truck that carries medical supplies to treat up to 100 victims.

The design of the station is built in the shape of an airfoil or wing, says Larry Enyart, president of LEA Architects, who designed and built the station. “It was an intensive work process working on site with the users,” Enyart says. “We had to consider maneuvering areas for both the municipal and ARFF apparatus, existing buildings that had to be replaced, and removal of dilapidated hangers at the site. The airfoil design was inspired by the aviation components of the aircraft, and echoes the feeling of the gently rolling hills nearby.”

Enyart points out that LEA designed shade areas on the structure to function as if they were flaps on the wing of an aircraft, and that it used local and regional masonry materials for both durability and sound control in the station. “This station is designed to be the home away from home for those who serve their shifts there,” he says, “so it has to be a comfortable place to live and work.”

Cameron notes that the previous station had only 900 square feet of living space, compared with 4,500 square feet of living space in the new station. “In our old station, we could see the airport from every room, so we wanted visibility in the new station too,” he says. “LEA was very responsive to our needs in that sense, and the amount of window space we have compared to other AFFF stations is very high. Our new training room looks out over the runways and can be used as an airport emergency operations center if needed.”

Apparatus staffing is based on county requirements, Cameron says. The ARFF rigs are staffed by a single firefighter each, while the engine has a crew of two. Twenty-five paid on-call firefighters are available to staff the remaining apparatus as needed. “There generally are three firefighters on duty per shift, and CALFIRE operates on a 72-hour shift system, where we are on for three days and then off for four days,” he points out. “Our station runs about 700 calls a year, while other CALFIRE stations to the south of us usually run double that number.”

Cameron says both the county and firefighters are pleased with the station LEA Architects built. “We managed to get a lot of what we wanted,” he says, “and we’re very happy with it. It’s a very usable space, and has been well received in our department.”