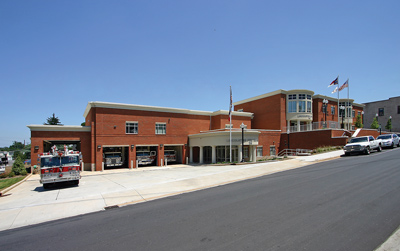 Not every fire district or municipality can come up with the funding to build a new fire station when the need arises. That’s when rehabilitating and renovating an older firehouse to accommodate new fire apparatus and equipment become the answer to allow those structures to function well in the 21st century.

Bob Mitchell, owner of Mitchell Associates Architects, says there are several possible reasons a fire department might choose to renovate an older station. “It’s certainly easier to build a new structure on a different site,” he says, “but a department might not do it because it can’t afford a new building, there is no plausible alternative site, the old station might be a historically significant building, or there’s a public perception against a new station.”

Mitchell notes the biggest driving force in renovating older fire stations is the larger size of fire apparatus today. Apparatus bay door heights and bay lengths are two of the biggest concerns in choosing renovation over building new, he adds. “The old 10-by-10-foot overhead doors don’t work at all anymore,” he says. “We’re using 14-by-14-foot doors now. The body on a fire truck is typically eight feet wide, and with mirrors it grows to 10 feet, which could fit in a 12-by-12-foot doorway, but we like to keep eight feet of clearance from one truck bay to another.”

Ken Newell, a partner in Stewart-Cooper-Newell Architects, says he performs a facility feasibility study for fire departments that can identify deficiencies in an older station and suggest remedies to correct them. “A department might need 15,000 square feet of space in a station and currently be operating out of 7,500 square feet, so we will quantify the additional space needed,” Newell says. “Deficiencies in older stations usually start with bay space because fire stations built 20 to 50 years ago typically are not large enough for new fire apparatus, especially in height, length, and width. Also, older apparatus bays often have problems with their exhaust and drainage systems.”

Joe Mottola, president of H2M Architects, says that in almost every case of a firehouse renovation, the focus is on the apparatus room. “Usually the department wants to get bigger trucks into a larger space in a safe manner with proper clearances,” Mottola says. “That’s the heart and soul of a fire station renovation, and once we get that laid out, then we get into the other spaces like meeting rooms, offices, and the kitchen.”

Mottola has found that it is often difficult to renovate existing apparatus bays. “In many instances, it’s cheaper to knock down the existing bays than try to make them bigger with larger doors,” he says. “We typically remove the bays and reconstruct them to fit modern fire apparatus.”

Josh Mandell, architect and senior associate at The Lawrence Group, believes the number one reason for renovating a fire station is to make the best use of what you already have. “You don’t want to change addresses or relocate people and have downtime,” Mandell says. “Response times can be at stake if a department chooses to go to a new location.”

Ted Galante, owner of The Galante Architecture Studio, says that while putting up a new building can be preferable because a department can get a new code-compliant configuration, a renovation also is worthwhile from a sustainability standpoint because it keeps the structure out of a landfill. “A lot of the work we do is renovating historic buildings,” Galante says, “and the challenges are the things you don’t see before starting the renovation. It takes a fair amount of experience to renovate a building and get it right because you have to read what’s not visible.”

For instance, Galante says, he often will hire a contractor guided by a structural engineer, mechanical engineer, and architect to do exploratory demolition by cutting holes inside and outside a structure. “We want to know that a column is where we think it is,” Galante say, “where the pipes and conduits are located, and what the underside of the roof looks like. In the end, the building is legible to us, it gives us information we can work with, and it eliminates construction change orders.”

Galante says old stations often have challenging floor issues. “We have seen a basement full of temporary shoring to hold up an existing vehicle in an old station,” he says. “We had to remove the old concrete slabs and rebuild the floors with new steel and concrete to hold the new fire apparatus.”

Don Collins, owner of Fire Station Design Consulting, says historically designated fire stations also pose challenges. “You can’t change the face of a structure like that,” he points out. “One station in Massachusetts had a fire station on the National Register of Historic Places. During the renovation, they couldn’t modify the doors, so they lowered the floor 18 inches to accommodate the newer apparatus. It was a brilliant move on the part of the architect.”

Most older fire stations don’t meet the requirements of the Americans With Disabilities Act (ADA), Newell says, often meaning updating significant portions of an older station. “Some departments also face gender separation issues, where they try to provide some means of gender separation,” he notes. “It’s a major issue in a lot of old stations where there may be only one bunk room, one shower room, and one toilet restroom.”

Collins says that once a department decides on renovating an existing station instead of building a new one, it often faces challenges in bringing the old station up to modern codes. “Modifying a fire station commonly falls under the International Building Code,” he says. “You have to have the building sprinklered and make it ADA-compliant throughout.”

Jim Zwerg, architect and facilities manager for the Phoenix (AZ) Fire Department, says the department isn’t allowed to move or relocate a fire station during renovation. “Whatever first-due is in dispatch means those crews have to stay in quarters to respond, which is the most difficult hurdle for us with a renovation-especially in a multicompany station where we might have an engine, a ladder, and a rescue.”

Zwerg says that a recent floor renovation at Phoenix’s Station 44 meant putting a modular trailer in the station’s parking area to create a dorm space. “The contractor started the floor renovations in the dorm area and got the floors redone and then moved onto the next area so the crew could come back into the dorm at night.”

Remodeling fire station restrooms and bathrooms can put a dent in a department’s budget, Zwerg notes. “I’ve seen a simple bathroom remodel cost $150,000, but only about half of that figure is for the actual construction,” he says. “When we do a restroom remodel, you have to bring in two sets of portable showers, sinks, and toilets; hook them up to the sewer system; plug them into the water system; and hook them up to electricity.”

In most renovations, The Lawrence Group is able to keep the station in operation, Mandell says, although in some instances, such as with a small secondary station with one or two bays, for example, it might be necessary to close it during construction. “There’s always some inconvenience,” he points out. “If the station has two bays, we might make one a living area while the living area is renovated and then renovate the bays, one by one.”

The city of Lincolnton, North Carolina, hired Stewart-Cooper-Newell Architects to renovate and expand an existing city hall and fire department and tie the two facilities together, Newell says. The buildings were located adjacent to a historic courthouse, so the renovated structure had to complement the area. The final design incorporated a new masonry exterior on the two facilities with an addition that connects the two buildings. The fire department got a new apparatus bay in the addition, renovated living quarters, new offices, and training classrooms.

Stewart-Cooper-Newell Architects also renovated and tied together existing facilities for the Vinton (VA) Fire and Rescue Department and the Vinton (VA) First Aid Crew, which make up the town’s public safety department. Both existing buildings remained in operation while a new first aid building was built in a former parking lot area, and then the new building and the existing two-story fire station were joined by a 2½-story tower, while the original first aid building was demolished.

H2M Architects recently handled the renovation for a fire department on the eastern end of Long Island, New York. “It was a two-bay substation built in the 1970s where the bays were too small,” Mottola points out. “We renovated the station by expanding the bays out one side and pushing out the front to give them better clearances front to back. We’ve found it’s almost always better to work with what you have already.”

Collins says he worked with SVPA Architects on a renovation and expansion project for the Ankeny (IA) Fire Department’s Fire Station No. 1, which was built in 1999, as the department transitioned from an all-volunteer force to a combination department with daytime career staffing. With increasing call volume, the department needed to renovate to go to a 24/7 staffing model. “It was necessary to add a new day room, sleeping quarters, administrative offices, and an emergency operations center,” Collins notes. “Part of the 1999 building was renovated into kitchen, physical fitness, gear storage, and other operational support areas. The newly programmed spaces came to 16,500 square feet of additional space and 2,500 square feet of reconfiguration and renovation at a project cost of $4.2 million.”

Thomas Openlander, chief of the Kirkwood (MO) Fire Department, says The Lawrence Group worked with his department to renovate and put an addition on a 70-year-old Tudor-style fire station that is a local landmark. “The station had obsolete plumbing and electrical wiring,” Openlander says. “The construction was cinder block with Portland stucco plastering over it, and we had water infiltration behind the stucco causing significant deterioration.”

The renovation and the new addition were done at the same time, Openlander notes. “We added three apparatus bays for an engine, ambulance, and technical rescue unit,” he says, “and changed the spaces in the original structure and how they were configured. We converted an open bunk room to a large classroom; the old single apparatus bay became the lobby and a meeting room; the day room became a kitchen and two offices; and the area that had housed turnout gear became another office.”

A common thread found among F.I.E.R.O award-winning designs is a very restrictive site for a new or remodeled station. The Spokane (WA) Fire Department’s Station 4, by architect Denny Christiansen, is no exception. The station was built inside a busy street cloverleaf’s loop. The design team found very effective ways to work within the site constraints and create an efficient and attractive four-bay station quartering two active companies. 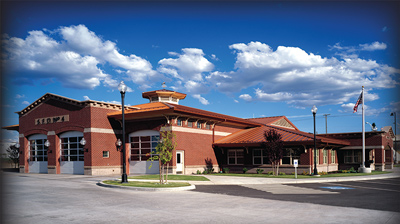 These included wise traffic flow patterns on the site and efficient interior travel pathways for quick loading of the apparatus by firefighters from the different locations in the station. The design team worked closely with a neighborhood committee concerned with keeping the station aligned with the neighborhood’s historic buildings. The designers created an attractive building that has a historic feel to it by the replication of brick and lintel patterns from the original Station 4 that stood a few blocks away.