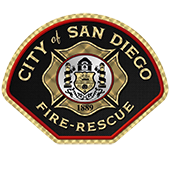 Those opposed say that there is a need for a fire station to assist coverage areas but claim city officials chose the wrong site in 2015 and have continued to pursue building there despite mounting challenges.

The site is in a semi-rural residential area and is next to environmentally sensitive land, features steep slopes and has a relatively narrow entrance-and-exit route.

Critics say San Diego should either find another nearby site or possibly revive three sites city officials considered but rejected six years ago.

City documents indicate officials plan to break ground on the 1.3-acre site in January, with construction expected to take about two years.