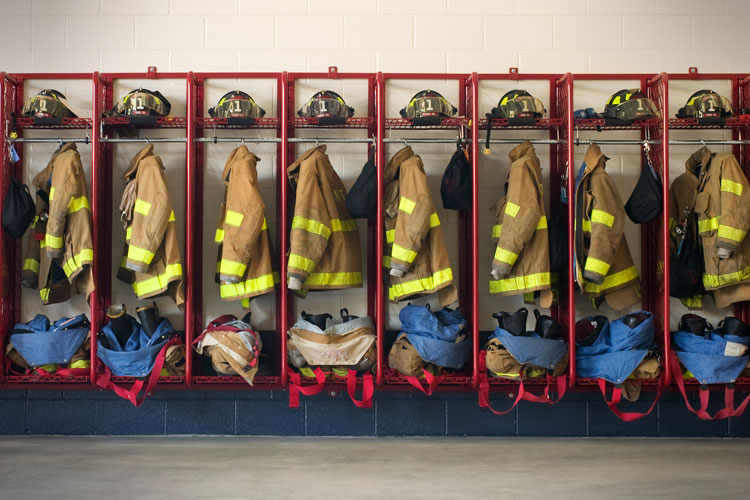 When I worked at my department’s training center, we made it a habit to perform a bunker gear inspection for in-service crews that were coming to do drills. We would have the crews stand in a line and then inspect their boots, soles of their boots, pants, suspenders, jacket/coat, Nomex hood, gloves and helmet. To our surprise, we could not believe the number of issues we encountered.

Many culprits were the more senior firefighters. They had become lax. Basically, these were the Ladder/Aerial personnel and/or Drivers. Since their run load was minimal compared to the ALS units and/or Pumpers, I assume that they felt there was no need to update or report anything that was wrong with their gear.

Newer firefighters were up to speed. They committed to getting the newer style firefighting boots and were assured that they had the “latest and greatest” the department had to offer. The newest gear was and is always available to all firefighting personnel! It was just a matter of going to the quartermaster and getting it surveyed or replaced.

Some issues were pants with no suspenders; ill-fitting gear because of weight gain/loss; cuts in the boots and soles; shell integrity compromised in either the pants or jacket; no Nomex hood; helmets without chinstraps or face shields; holes or cuts in the gloves or improper, nonapproved, or nonfirefighting gloves; and dirty gear.

It is important to have gear that fits correctly. This is because there needs to be a thermal layer or air space between your body and your gear. Being too tight or too loose also can compromise one’s mobility. Remember, the majority of active firefighting is done crawling on all fours or working in confined spaces.

I am not saying that our department didn’t provide replacements for all these issues. What I am saying is it was just laziness. We had policies in place stating that on the first of the month, the shift commander was required to make sure that all drivers’ licenses were valid and that all bunker gear was fit for duty. It is definitely not enough to say “Is everybody’s license and gear good?”

Everyone must don their gear and physically inspect it with a second set of eyes or an officer’s eyes, along with physically seeing the driver’s license and checking its validity online. The officer may need to order those who have issues to go get the faulty items replaced immediately via the quartermaster, accompanied by a signed survey form. Uniform checks were only on Tuesdays and Thursdays, while PPE was Monday through Friday during regular business hours.

There can be no compromise when it comes to personal safety. Even though you can say to yourself that “nothing is going to happen,” in our business, it eventually will, and you may get injured. Direct flame can enter through a tear in your pants, jacket or boots, eye protection can be compromised if no shield is in place and no SCBA is donned, especially during forcible entry operations. Good gloves are a must as hand protection is crucially important.

The days of dirty gear showing one’s seniority are over! While a single event can trigger job-related illnesses, repetitive donning and doffing of dirty gear coming in contact with our skin is another culprit. Subsequently, we get complications through exposure or absorption. Much is still unknown about many products that are everywhere and how their chemical composition changes when exposed to fire. Whatever it is, we all know that when these different materials burn, the combustible products and gases, smoke, and by-products are generally not good for us.

Our department purchased special extractors and dryers for us to wash our gear. At my station, we had developed a “buddy” system for washing our gear. We would make an agreement with another firefighter on another shift to wash each other’s gear. This way when we returned to duty, it would have a full day to get washed and dried and be ready for our tour of duty. At that time, we had only one set of gear. We also would partner up with someone similarly-sized to “borrow” their gear. This way, if our gear incurred damage or got exposed to something bad, and we could not get it replaced after hours by the quartermaster, we would still have protection.

For these reasons, as stated above, we now see the trend of getting two sets of bunker gear for all personnel. There is no doubt it is a great added expense. But it is well worth it and priceless when it comes to ensuring the health and safety for those who put their lives on the line every day at work. The municipalities need to know this. It will be worth it for them in the long run.

Lastly, everyone should get involved with the committee that selects the bunker gear and SCBA for the crews. Have different vendors come out, listen to their sales pitch, leave gear for firefighters to try and drill with and use during a tour of duty. Find out about their guarantees for repairs. Stay involved! Improvements are always taking place. You need to have the greatest protection you can get!

FRANK R. MYERS is a retired lieutenant with the City of Miami (FL) Fire Rescue, where he served 32 years. Before his retirement, he served at the training center for six years as the driver engineer instructor. He works as a consultant for PSTrax.com, a technology service that helps fire departments across the country automate their apparatus, equipment, and inventory checks.