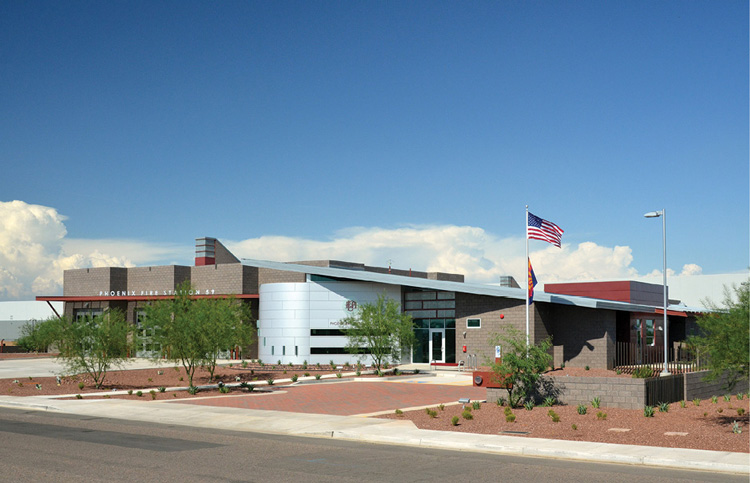 The Phoenix (AZ) Fire Department had the authority to build four stations as part of a 2006 bond, and its intent was to replace its Station 59 near a huge tank farm property. 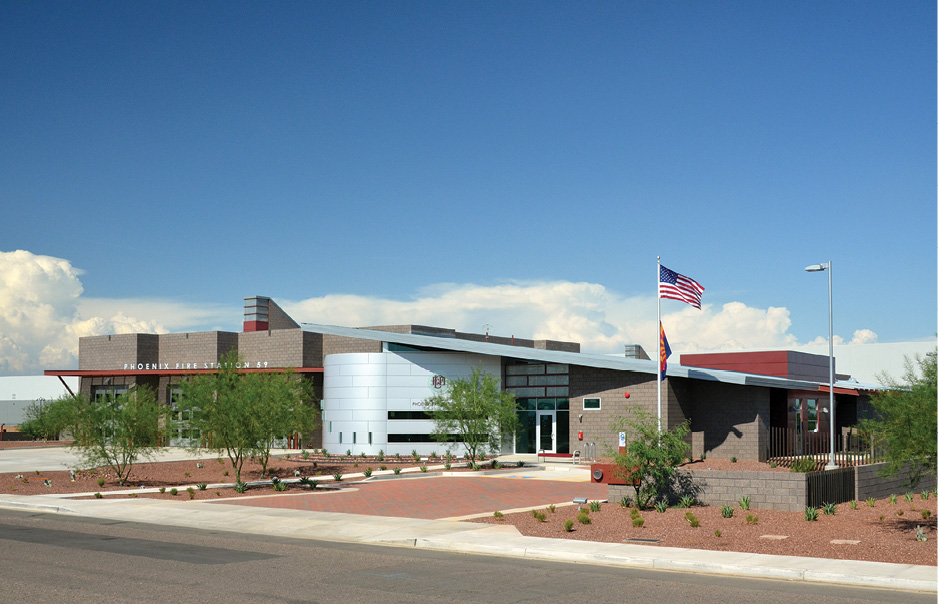 “The tank farm had been expanding, which meant that our station had outlived its efficiency because it was too small to hold the apparatus needed to respond to a tank farm emergency,” says Jim Zwerg, Phoenix Fire’s architect and facilities manager. “We needed a full-size, four-bay station for equipment and the expansion of apparatus. At the same time, the department was pursuing pod-type skid units on flatbed trucks, so we wanted an additional four-bay building behind the station for that equipment and storage.”

LEA Architects got the contract to design and build Phoenix Station 59, says Larry Enyart, LEA’s president. “We were hired to design the station and get Leadership in Energy and Environmental Design (LEED) certification, and once we settled on the design, we decided to try for LEED Platinum, which the completed station was awarded.” 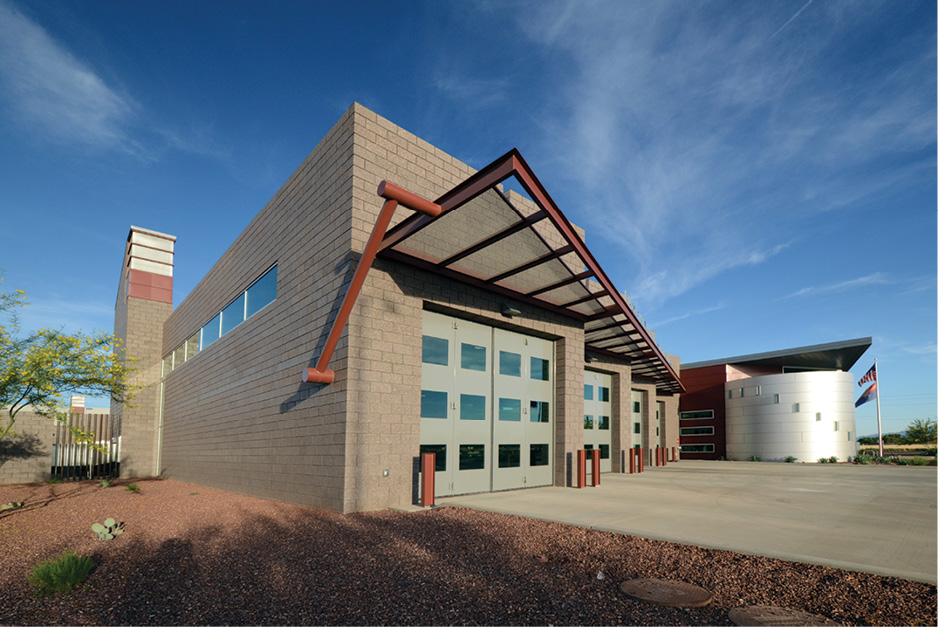 2 This northwest view of Station 59 shows the steel shade canopy over the apparatus bay doors.

Enyart says the modern architecture of Phoenix Station 59 responds to the desert environment as well as the surrounding industrial area. “The cylindrical form of the fire station’s physical fitness room, cladded on the exterior with insulated metal wall paneling, with translucent glass fin fenestration, metaphorically speaks to the fire station’s primary mission requirement as a first responder serving the industrial context of the large surrounding fuel farm structures,” Enyart points out. In addition, he notes, “The use of natural materials for both buildings, the station and the pod storage building, including locally manufactured integral color ground face concrete block units, the prevalent use of steel, and perforated metal, further relate to the industrial buildings near the site.” 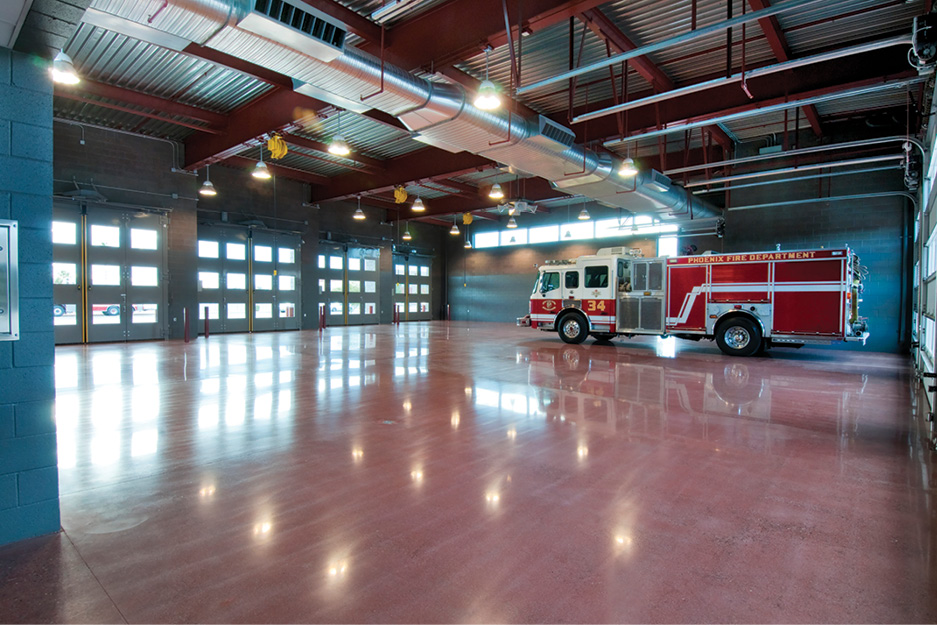 3 Station 59 has four double-deep, drive-through bays that will accommodate additional apparatus to cover the area.

Zwerg says that Phoenix Station 59 is 15,078 square feet in size, while the pod storage building is 5,677 square feet. “The station has four double-deep, drive-through bays, 13 dorm rooms, a full kitchen, a dining room, a day room, and an exercise room,” he says. “LEA Architects designed the station with the potential to add a wing onto it for battalion use, but that addition has not been done yet.” Total cost of the station complex was $5.2 million.

Instead, the department had LEA Architects design and build the four-bay storage building behind Station 59 that holds a Federal Emergency Management Agency skid truck and several preloaded pods, including a command office pod, a special operations pod, a hazmat pod, and an aircraft rescue and firefighting pod. 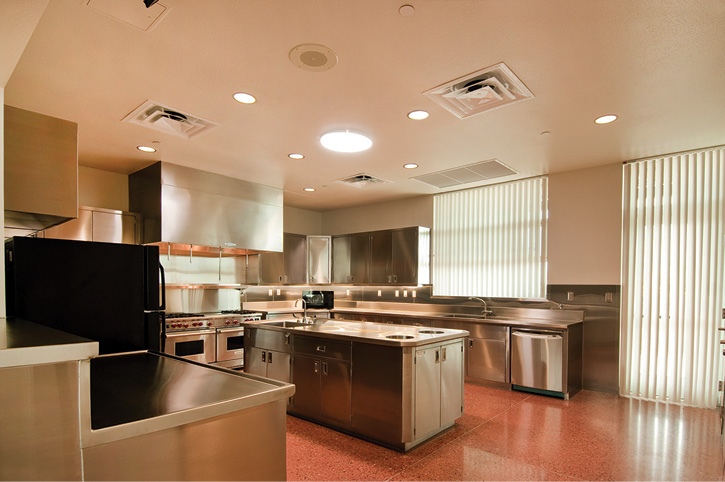 4 The Station 59 kitchen has all stainless steel fixtures, including cabinets, counters and countertops, door fronts, and table to be easy to clean and disinfect.

Enyart points out that the fire station’s west façade is protected from the harsh desert sun by a continuous horizontal steel shade canopy over the apparatus bay doors, while the main entrance is protected by a deep roof overhang and a vertical shade screen of perforated metal. “The west façade of the pod storage building mimics the west façade of the fire station at the apparatus bays,” Enyart notes, “with a continuous horizontal steel shade canopy to block the western sun.”

Other environmental touches on the station and storage building include a south-facing standing seam metal shed roof over the living quarters of the fire station that houses roof-mounted photovoltaic modules, while additional double-sided photovoltaic modules are located over the patio off of the kitchen, which double as a shade canopy. 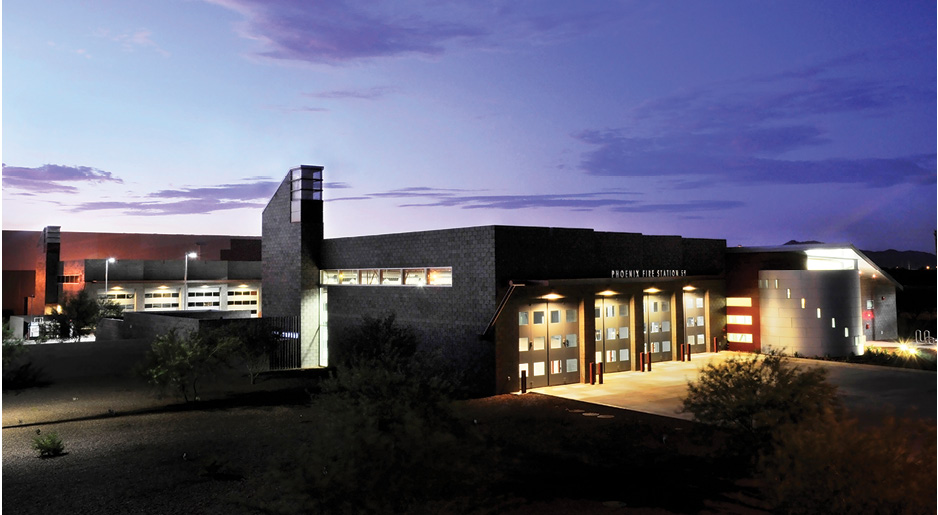 5 LEA Architects used natural materials for Station 59 and its accompanying pod storage building, including locally made ground face concrete blocks as well as a great deal of steel and perforated metal. Station 59 is 15,078 square feet.

Enyart says LEA Architects incorporated the use of local and regional materials to fit the LEED requirements whenever it could. “Masonry was made two miles away,” he says. “We used ground face blocks and poured-in-place concrete, as well as recycled floor materials for the workout room and also for components in the steel.”

Both buildings are designed to capture rainwater for water harvesting and irrigation uses, Enyart says, and pervious pavers in driveway areas allow water to penetrate into the soil instead of running off into desert washes. “We also put in weathered steel fence posts with round pickets that you can see through to give the station area an open feeling,” he adds.

Inside the station, Enyart says LEA Architects followed Phoenix’s design guide and installed an all stainless steel kitchen, including cabinets, counters and countertops, door fronts, and tables to be easy to clean and disinfect and resist bloodborne pathogens. Floors in the station are ground-colored concrete, he notes, and natural light woods have been used for office and storage cabinets and accents.

The dorm area has three captain dorm rooms and 10 firefighter dorms, with three bathroom modules next to the dorm pods, where the central corridor is lit by solar tubes. “Each of the dorms faces to the outside and is set up to have operating windows,” Enyart observes. “Dorm pods have one bed, one desk, and three lockers.”

Enyart says one of the biggest challenges of designing the station for the three-acre site was a west-facing egress. “That meant we had to look into strategies to mitigate the heat gain from the west facing of the building, which we did through use of materials and shade structures,” he says.

Zwerg points out that Station 59 works well in the light industrial neighborhood. “Besides the tank farm, there are a lot of big box warehouse structures in the area, as well as farming and a large pallet farm nearby,” he says. “This station is set up well to handle any emergency in the area.” 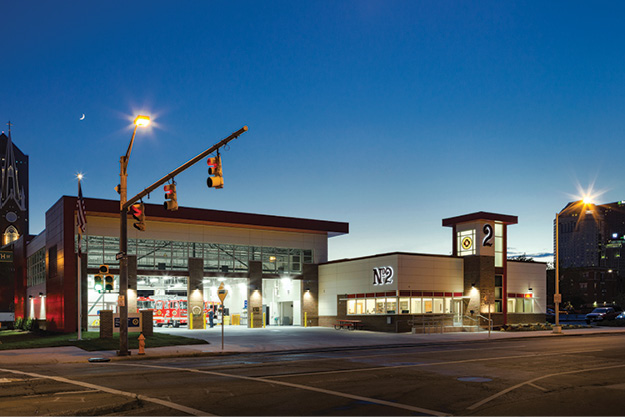 The Columbus (OH) Fire Department Station 2 project impressed the 2017 F.I.E.R.O. Fire Station Design Awards jury in that day or night, the building clearly “reads” as a fire station to anyone passing by its location in the city. Placement of the watch/office amplifies the impression that the station has s commanding presence in the neighborhood, which enhances area security.