The Peekskill (NY) Fire Department was covering the city of Peekskill with 26 paid firefighters and 130 volunteer firefighters operating out of five stations that housed six fire companies.

Of the five stations, the newest was 50 years old, two were from the 19th century, and one was a metal pole building. All the stations were deficient in a number of ways, and some had operational and firefighter health and safety issues. The city decided the solution to its firehouse problems was centralization of all six fire companies into a single station.

MORE THAN A STATION

John Pappas, Peekskill’s former chief, says that with the decline in volunteerism, the city felt that consolidation would benefit all the fire companies. “We also wanted areas where we could do training in the firehouse,” Pappas says, “and we needed office spaces and plenty of storage space. The company chiefs never had offices in their stations, and many of them stored equipment in containers outside.”

The biggest challenge for the department was getting the land for a new fire station, Pappas says, adding, “It took several years to get a leaseholder in a shopping center to move from the location where we wanted to build. And, we worked with four city administrations before the new station was completed.” Pappas notes that the department interviewed several architects and chose Mitchell Associates Architects to design and build the new station.

Bob Mitchell, principal at Mitchell Associates Architects, says the location of the new central fire station on the corner of Main and Broad Streets is one of the most prominent locations in the city. “The city council was clear that the new fire station headquarters would become the gateway to the city and serve as a clear sign of the city’s confidence in its future,” Mitchell says. “It also determined that the building would serve as the city’s primary location for public meetings and would include a fire museum highlighting the 200 plus years of service to the community and house the department’s restored 19th century fire apparatus.”

2 A partial view of the apparatus bays from the station’s mezzanine. 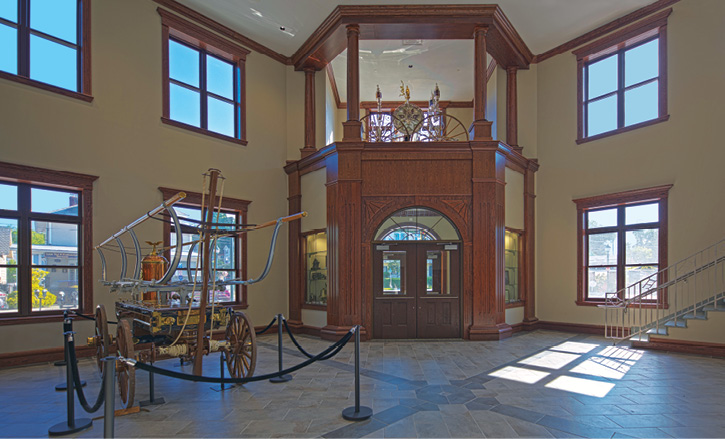 3 The lobby/fire museum area where the department’s antique pumper is displayed.

The station Mitchell designed is a 30,000-square-foot, two-story facility that features a fire museum lobby and eight single-deep back-in apparatus bays on the ground floor, an exercise room/gym, and a public meeting/training room that is dividable down the center that will seat 182 persons at tables or 300-plus auditorium style on the second floor.

Pappas points out that the department wanted training aids built into the new station, and Mitchell Associates obliged. “We have a bailout window on the mezzanine where we also do SCBA and confined space training, a sprinkler training area with different sprinklers on the wall that can be set off to flow water and shut down, and a dedicated SCBA room,” Pappas says. “And, there are all the other spaces that we needed, like the space for the hose washer and dryer, the decon room, the washer and dryer room for our turnout gear, and a lot of storage space that we never had before.”

To the left of the lobby/fire museum, Mitchell placed the administrative area of the station, comprising the chief’s office, an EMS office, a captain/lieutenant’s office, a work production area, a bathroom, two offices with library style computers, a conference room, and a mailbox area. Cost of the new station was $12,114,000. 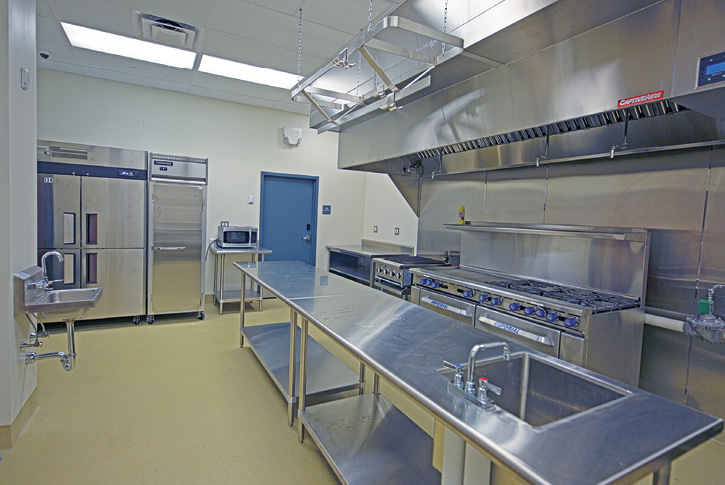 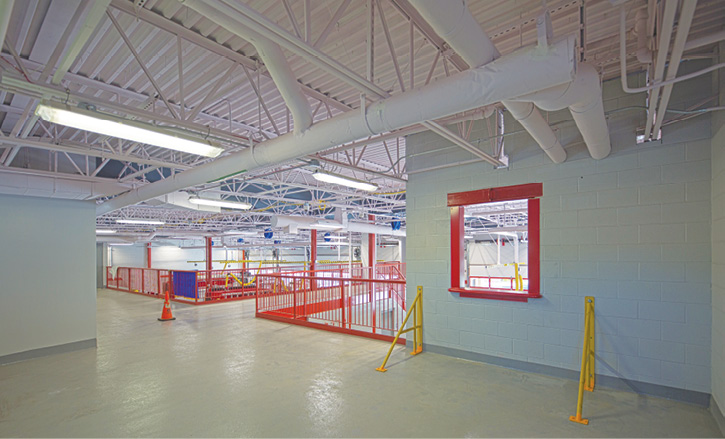 5 Training aids in the Peekskill station include a bailout window on the mezzanine.

Mitchell notes that the city has many older stone buildings in its boundaries and wanted to echo the look and feel of those buildings on the new fire station. “The city and fire department wanted the new station to look timeless, so we got stone from a Pennsylvania quarry, a dense sandstone, and detailed it in the manner of past rusticated stone at the base of the building and blended in brick above it.”

The two-story side of the building has a mansard parapet, he adds, with heavy-duty asphalt shingles and standing seam copper along the top and bottom edges. The rest of the roof is flat and rubber-coated, and all mechanicals on the roof are out of view because of the mansard. Windows are double-hung, double-glazed windows, Mitchell says, “of high-quality and low E, argon-filled one-over-one, and also one-over-one with a fixed transom.”