A Boston, Massachusetts, EMS station designed by The Galante Architecture Studio is the winner of an international 2019 German Design Award presented by the German Design Council.

The new EMS facility, which previously won an Architects Newspaper Award for its design, won in the Excellent Communications Design—Architecture category. A statement from the German Design Council’s jury notes, “The timelessly clear, straightforward architecture is designed entirely with function in mind. A good design that also impresses in terms of energy efficiency.”

Ted Galante, principal at The Galante Architecture Studio, says he didn’t intend to win an award with the design but rather focused on the building’s function, and the design flowed from that. “This project was driven by Boston’s program, budget, and schedule,” Galante says. “When we put the program and function into the building, we knew it didn’t have to look complex but had to operate in a complex way that is durable and long lasting.”

The approximately 10,500-square-foot structure comprises 11 nondrive-through apparatus bays, each double deep to accommodate two ambulances and outfitted with vehicle exhaust systems. The facility is not staffed 24/7 so there are no dorm rooms. However, it does contain two offices, a break room with a small kitchen area, and an instruction area where the city gives out child safety car seats.

John Cushing, director of facilities for Boston EMS, says the station is used purely to house the department’s ambulances. “Those ambulances don’t respond out of the station because they are assigned to a specific geographic area, and each of them has certain posts,” Cushing points out. “So, it’s not like a neighborhood station where ambulances run out of it. Each shift reports to the station and takes its ambulance to its working area and returns to the station later to hand over to the next shift.”

The new EMS facility replaced a dilapidated garage located on the historic grounds of the old Boston Sanatorium. “We had been housed in an old four-bay maintenance building at the site of the old state hospital, which had been developed into different uses,” Cushing says. “We needed to expand onto some available land, and the city of Boston’s Capital Improvement Program gave us the potential to do the expansion to an 11-bay station.” Cost of the facility was $3.4 million. 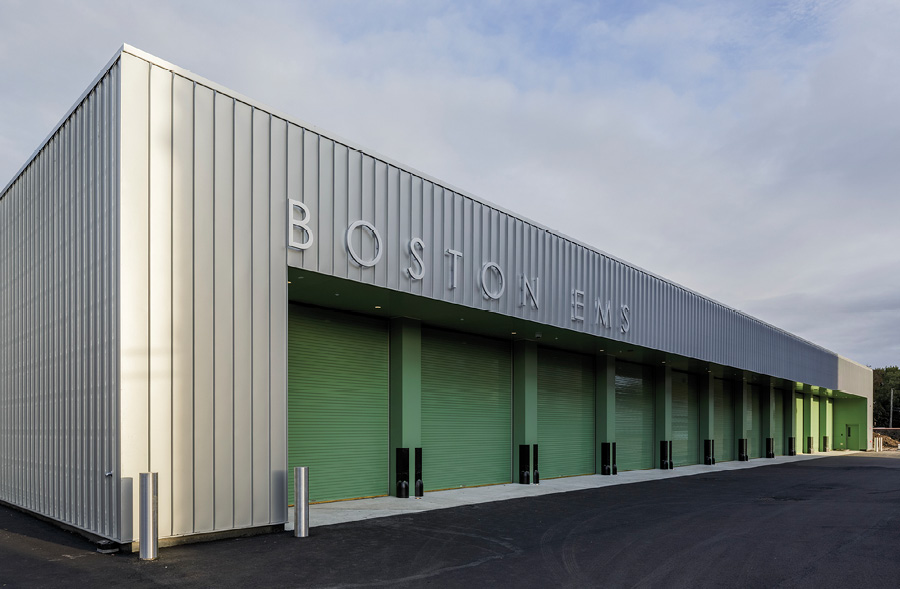 2 Boston EMS required a hardened station because of the narcotics stored in the facility, so Galante designed the facility as nearly windowless, with only a few high slot windows at the rear and caged skylights on the roof. 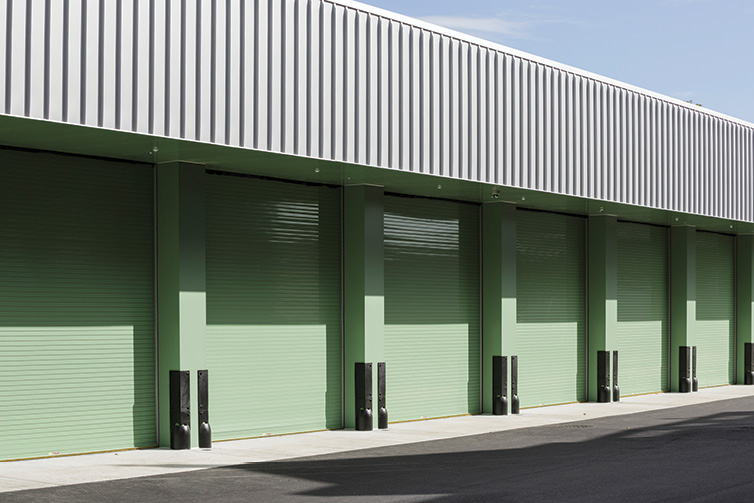 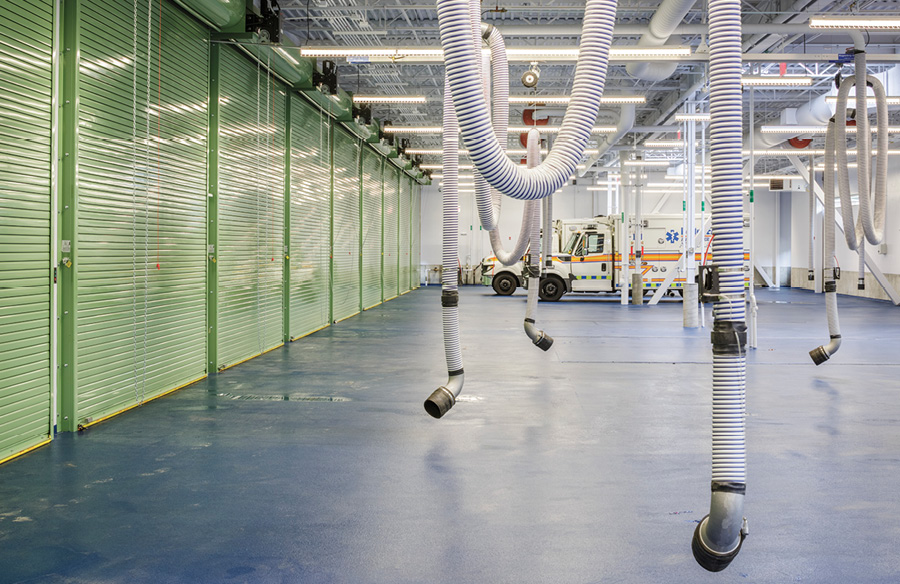 4 The 11 double-deep apparatus bays can each accommodate two ambulances and have vehicle exhaust systems.

Galante notes that Boston EMS needed to have a hardened facility because of the narcotics stored in the station. “Because the site was lower than a nearby parallel street, we had to do jump studies to prevent someone from jumping onto the flat roof,” he says. “We set the building back from the street so that couldn’t happen and designed a fundamentally windowless, hardened facility with only a couple of high slot windows at the back.” Galante also set prismatic diffuse skylights on the station’s roof to get natural light into the facility and placed security cages over the skylights.

The station is a structural steel frame building with a three-foot-tall concrete wall around its perimeter to protect the structure from impact. The walls use a metal stud infill with a plywood perimeter, covered by standing seam aluminum siding. Galante says the building has three inches of insulation running from below grade to above the flat roof, which consists of built-up asphalt roll roofing that has hot tar in between its layers to make it durable and long lasting. “The interior of the station has abuse-resistant sheetrock coated with waterproof panels,” Galante points out, “which can get wet and stay durable.” 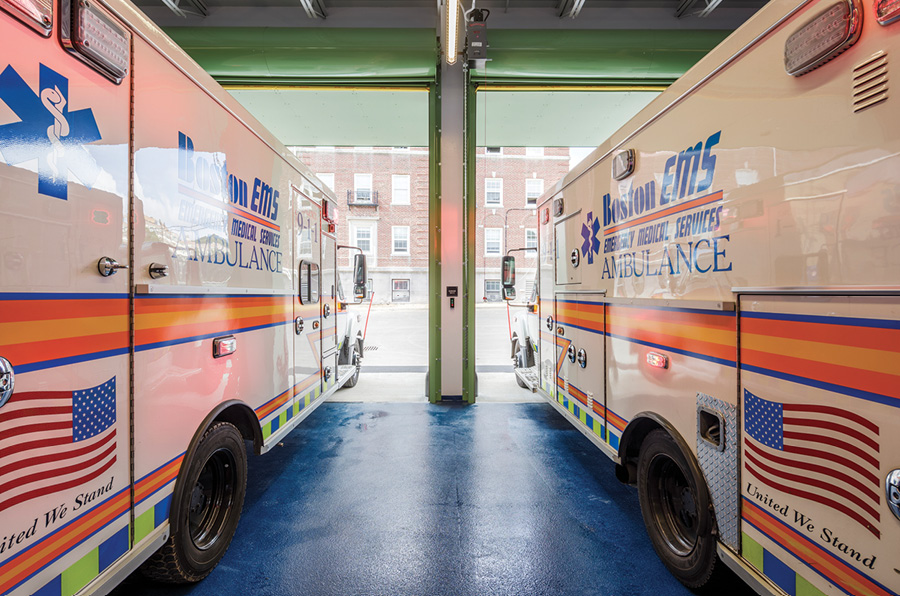 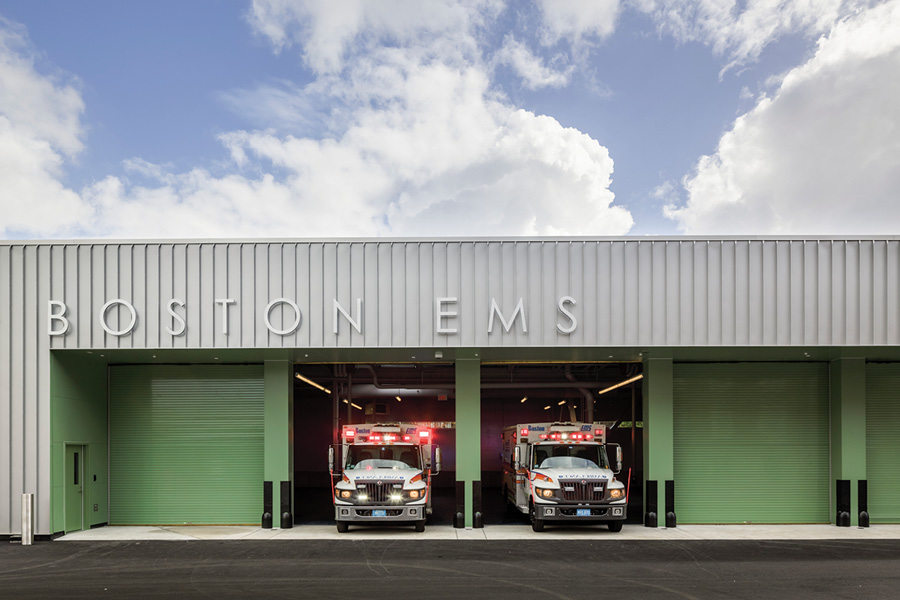 6 Cost of the new Boston EMS station was $3.4 million. 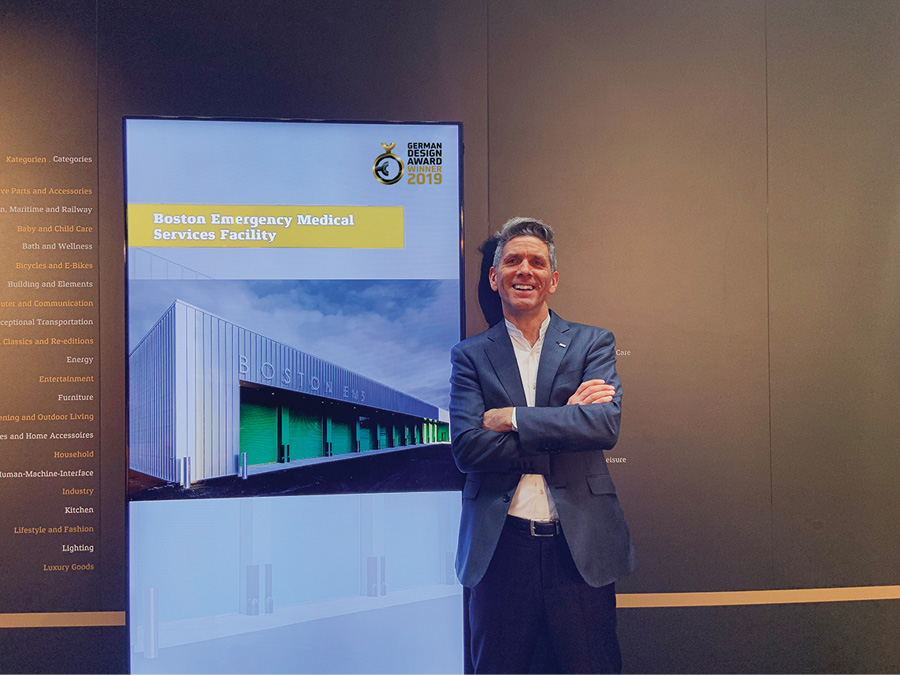 7 The Galante design of the Boston EMS station won the international German Design Award from the German Design Council. Shown is The Galante Architecture Studio principal Ted Galante in front of the award plaque.

The Boston EMS Special Operations Division facilitates medical coverage and coordination of assets, resources, and logistics during special events and emergencies, allowing Boston EMS to respond to large-scale emergencies without compromising its ability to answer 911 calls. Beyond traditional ambulance units, the division uses a medical ambulance bus, utility vehicles and bicycles, specialty trailers, and mass casualty incident equipment. Its mass casualty bus, provided to the city by the Department of Homeland Security, is housed in the new EMS station.

Cushing points out that “the public likes the look of the new building. It’s very functional for us, and we are glad that it is winning awards but also that it supports our operations so well and is very helpful to us as a department.”