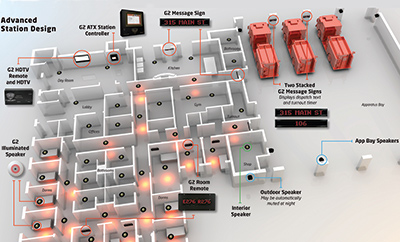 Dave Johnson, national sales manager for ComTech Communications, says that radio-based alerting makes up about 85 percent of fire and medical emergency services, while 15 percent use a network-based alerting system. “Radio is tried and true, but it takes a bit of time because you are dealing with paging tones that take time to go through,” Johnson says. “And, depending on the number of stations that have to be alerted, there might be a 10-second delay. With a network-based system, all alerting goes out nearly simultaneously, within microseconds of each other.”

Typically, a network alerting system establishes a direct network path from dispatch to fire and emergency medical services (EMS) stations, Johnson points out, and most of the time the systems are proprietary ones. Johnson says the ComTech Communications ComTech 10 system is both radio- and network-based. “The network-based system has the redundancy of radio built into it,” he notes. “It can interface with any known trunked or conventional radio system and can integrate with P25 radio systems.”

Courtney DeWinter, director of communications for Locution Systems, says her company offers a comprehensive fire station alerting system that is broken down into five basic categories of products developed to solve different fire station problems. “Our PrimeAlert Fire Station Alerting System is designed in a modular way so the fire department can pick and choose the products it wants,” DeWinter points out.

The company offers automated voice alerting in two types of voices. “Concatenated Voice Technology is the clearest and crispest voice technology for station alerting,” DeWinter says. “Voice talent prerecords all the words, street names, and numbers needed for dispatch, which are then put into an audio database on a personal computer.”

The second type of voice that Locution Systems uses is synthesized voice, she adds, where a computer system holds a variety of sounds. When it reads a dispatch, it does a text-to-speech conversion. “But concatenated voice is crisper and better for longer words or words indigenous to a particular area,” DeWinter observes.

Dominic Magnoni, vice president and general manager of US Digital Designs (USDD), says his company makes the G2 system, which it originally designed for the Phoenix (AZ) Fire Department. “We redesigned Phoenix’s original fire station alerting system in 2005 and a number of years later spent two years in research and development to modernize the system,” Magnoni says.

Phoenix Regional Fire Dispatch is a regional system in central Arizona that handles dispatch for 22 agencies and also provides and supports the 911 system for Maricopa County. Phoenix’s population is 1,567,924 in 520 square miles, and the regional population is 4,300,000 in approximately 2,000 square miles.

Magnoni says the G2 system uses customized architecture plus intranetwork communications that are set up on modules, so the system is flexible. “We are constantly monitoring the activity on the system and reporting through data, e-mail, and logs to troubleshoot systems outside of Phoenix’s G2 system to create customer satisfaction,” he notes.

USDD has more than 1,000 installations in the United States and Canada, according to Magnoni. “The G2 system is customized for each fire department,” he observes, “to allow the end user to maintain how it prefers to dispatch and how it wants the messaging displayed. As a dispatcher confirms the information being called in, it is automatically sent to us, and once the dispatcher commits to the unit, the packet is sent to us.”

“USDD uses both audible and visual reinforcement of the message,” Magnoni says. “Within one-third of a second from when dispatch commits, we illuminate text messages in-station to display the unit and the call type. Instead of waiting for tones or voice information, the visual information is immediately going to let firefighters know they need to proceed. They can get the audible information as they are moving toward their apparatus and also get the details off of a printer and displays mounted in the apparatus.”

Magnoni notes that for night calls, the G2 system can ramp up lights slowly in sleeping areas and the apparatus bay, which it has found to be more effective in bringing firefighters to alert status. Johnson says the ComTech 10 system can zone out portions of a fire station if necessary. “For example, the dorm rooms often are alerted only for certain calls,” he says. “Often the department will want the apparatus bay lights turned on when the alert comes in, and the dorm rooms are lit in red at night and contain low-voltage speakers with red LED lights built in.”

Other functions that the ComTech 10 alerting system can handle, says Johnson, include opening the apparatus bay doors, shutting off a firehouse kitchen stove, and turning street lights to green for apparatus egress. “All these things can happen automatically on dispatch,” he says.

DeWinter says PrimeAlert also has fire station lighting systems and visual displays. “The Night Vision illuminator automatically lights the station at night when everyone is asleep,” she says. “It’s a monochromatic red lighting positioned in egress areas that comes on when an alarm is received that makes it easier to navigate and preserves a firefighter’s night vision.”

The system also has displays like a light stack that can be used to identify units by colors or type of call, whether for fire or EMS. PrimeAlert also has Zone Tracker, which routes dispatch information, tones, and lighting for a particular call only to the unit handling the call. “On an EMS call, you don’t want to wake up the entire house,” DeWinter points out. “The three levels we offer, basic, medium, and fully zoned, help mitigate sleep deprivation for responders.”

PrimeAlert also has automated mechanical controls to shut off gas stoves, open apparatus bay doors, and trigger traffic lights, DeWinter adds. “And, our ambient noise sensor product has specialized speakers that improve sound qualities, especially in places like apparatus bays where it might be difficult to hear.”

The more you study the rennovation of Vail Station 2, the more you understand the cleverness of the project. Vail (CO) Fire &Emergency Services determined the building was structurally sound. Working with the architects, a plan was devised to strip the building down to its studs. 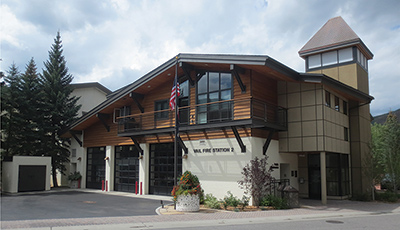 Originally a three-bay station, it was expanded to a four-bay in an earlier remodel. The added bay was converted to public restrooms for the 20,000 Vail day visitors. The upper level was reconfigured to include quarters for the duty crew of four. In additon, the station provides a two-bedroom apartment and a studio apartment as permanent residences for fire personnel. The old hose tower was modifited into a communications antenna tower but “reads” as a hose or watch tower. Finally, the entire building was reskinned in a very thoughtful arrangement of doors, decks, windows, and siding textures.