When Maryland decided to create a grade-separated interchange at the intersection of Georgia Avenue and Randolph Road in Silver Spring—two major north-south and east-west roads—the department’s 1950s two-bay, back-in fire station would have been landlocked with no road access, which meant it needed to find a new location for a new station. 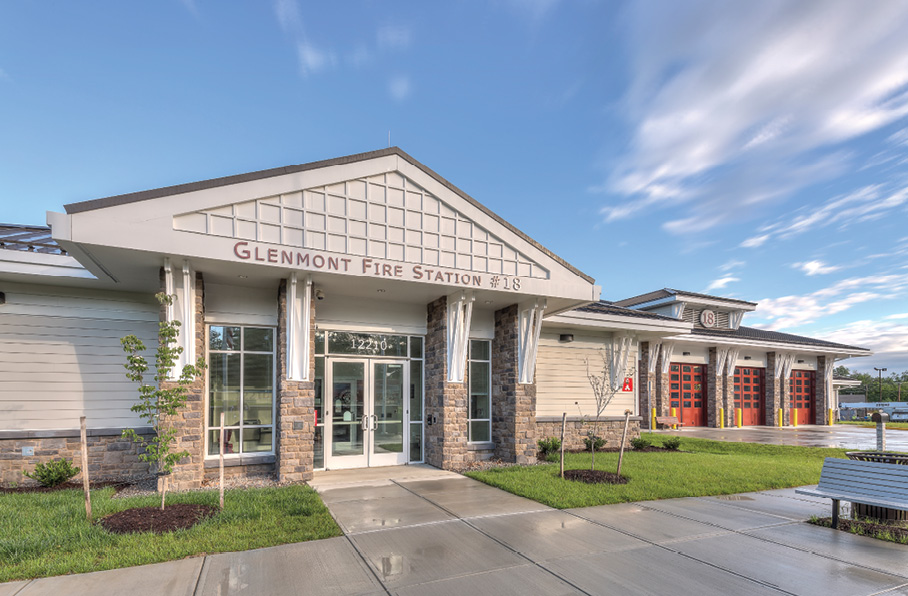 The Fire & Rescue Service had to use a temporary station while a new facility was being built at the southwest corner of Georgia Avenue and Randolph Road, a site that allowed Hughes Group Architects to design a 22,564-square-foot, one-story fire station with four double-deep, drive-through apparatus bays.

Don Scheuerman Jr., section chief of the Montgomery County Division of Building Design and Construction in its Department of General Services, says it was important that the design of the new station incorporate drive-through apparatus bays. “The new station feeds out onto Georgia Avenue, which is a major artery, so we didn’t want fire apparatus out there making K turns in the middle of the street and holding up traffic,” Scheuerman says. Another criterion that Montgomery County wanted in the new station was bifold doors instead of roll-up doors on all apparatus bays. “Bifold doors open very quickly and also have better visibility for the apparatus driver,” he points out. “They are a much safer door in that they reduce the number of accidents where the vehicle strikes the bottom of a roll-up door when exiting the station before the roll-up is fully opened. And, it’s also been shown that bifold doors have a greater longevity of use and have fewer maintenance issues.”

Scott Goldstein, Montgomery County Fire & Rescue Service chief, agrees on the use of bifold doors in the new station. “The bifold doors are well worth the extra cost when compared with roll-up doors,” Goldstein says. “About the only concern is that you need an additional four feet of bumper space for a bifold door, which makes the engine room a little bit longer. Our apparatus bays are 84 feet long.”

Goldstein says that Glenmont Station 18 has a large, separate, and dedicated turnout gear room, something that Montgomery County has been doing in its new stations for about 10 years. He adds that the station has clean rooms, bathrooms for use before firefighters are decontaminated, and decontamination areas that are accessible only from the apparatus bays.

As for the bunk room, Goldstein says that Hughes Group Architects designed a bunk room for 20 firefighters. “There are two bedrooms with two bunks each for the battalion chief and the emergency medical services supervisor,” he says, “and 16 bunk rooms with 5½-foot-high block walls to allow privacy for their users. Adjacent to the bunk room area are dedicated, separate male and female locker rooms and toilet and shower areas.”

Eliel Alfon, principal at Hughes Group Architects, says that Glenmont Station 18 is a T-shaped building that adheres to Montgomery County’s station design guidelines. “The four apparatus bays, the turnout gear room, and decon facilities are at the base of the T,” Alfon says, “while the living and working areas are in the top of the T.” The living and working areas include a watch room overlooking the apparatus bays, a study room, training room, exercise room, kitchen, dining area, day room, administrative offices, bunk rooms, lockers, and bathroom and shower facilities. 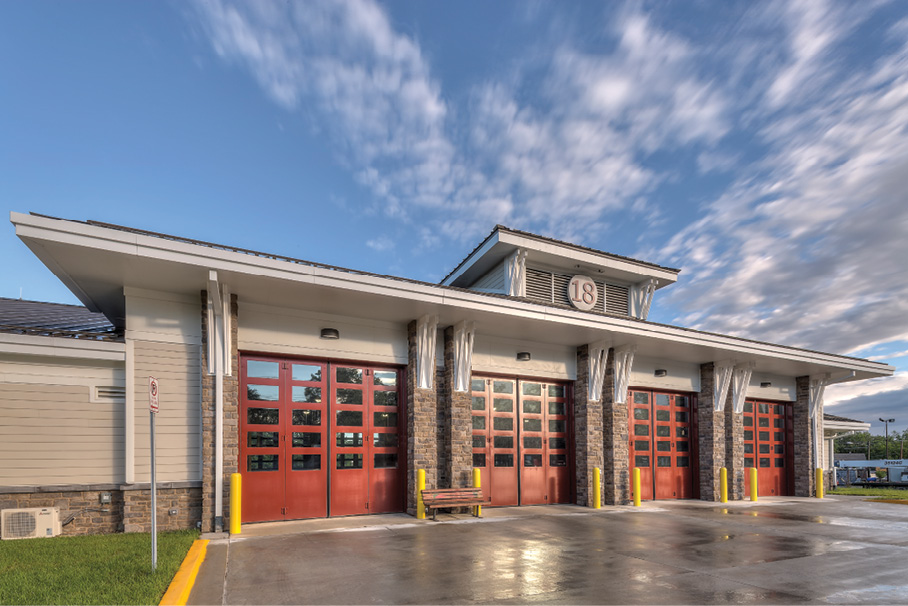 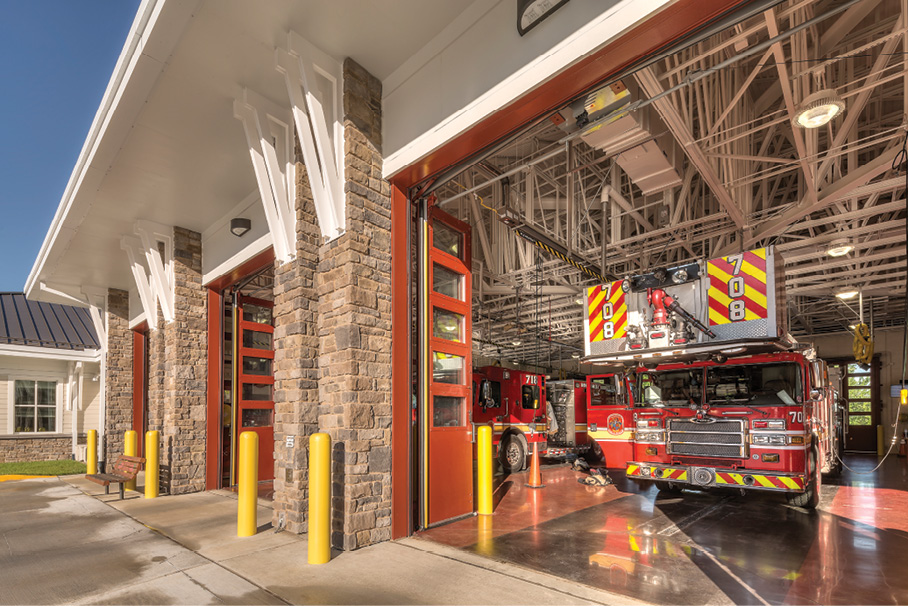 3 Bifold doors were installed in the front and back openings on the apparatus bays. The length of each bay is 84 feet.

EXTERIOR AND OTHER FEATURES

“An interesting aspect to the project was that there was a tremendous amount of community engagement,” Alfon points out. “It is mostly residential areas around the new station, so we had to present various options for the building. We presented three options: a traditional brick and block building; a contemporary style; and a traditional style, which was chosen because it was in keeping with the character of the area’s houses. The new station uses metal hip roofs, cementious siding, and stone veneer around the entire exterior.”

Alfon notes that Glenmont Station 18 “is a very energy-efficient building, with all LED lighting and variable speed motors on all its equipment. We were able to get a LEED Gold designation for the station.” He says that because the station’s apparatus bays exit onto the six-lane divided highway of Georgia Avenue, a median curb cut was installed to allow apparatus to access the opposite side of the highway. “We anticipate that the open area to the right of the station will in the future become a small neighborhood park and green zone,” Alfon adds. 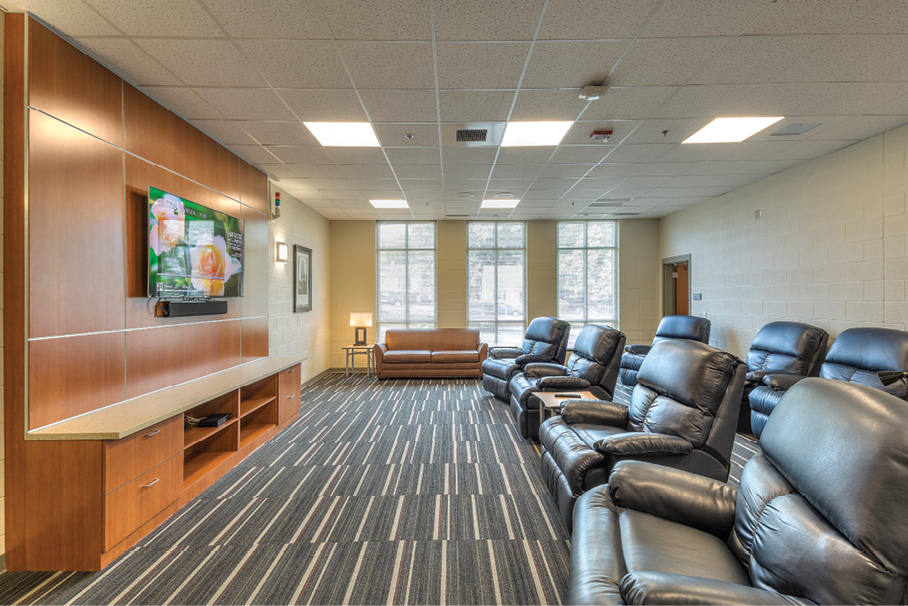 4 The day room at Glenmont Station 18. 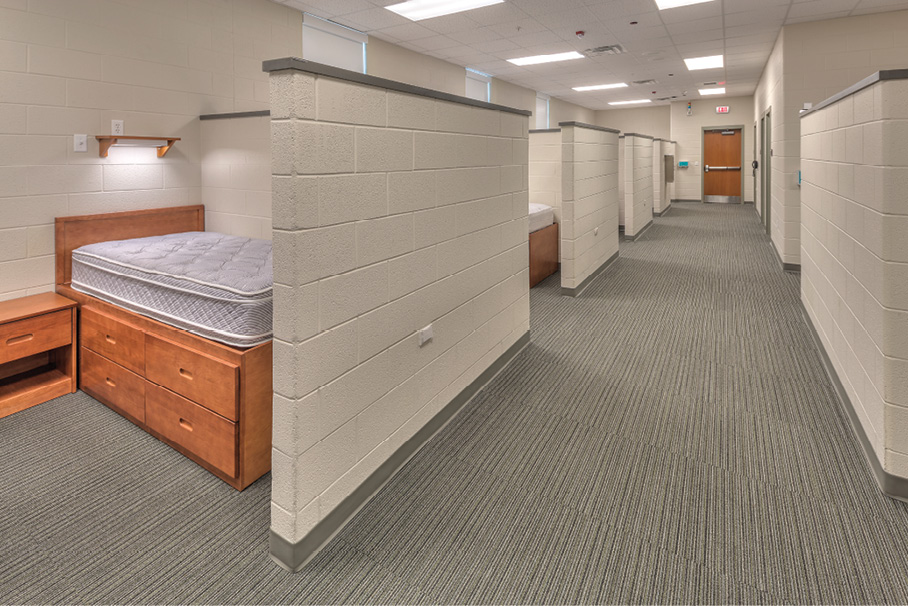 5 The bunk area in Glenmont Station 18 has 16 individual rooms with 5½-foot-high block walls for privacy and two bunk rooms with two beds each for the battalion chief and emergency medical services supervisor. 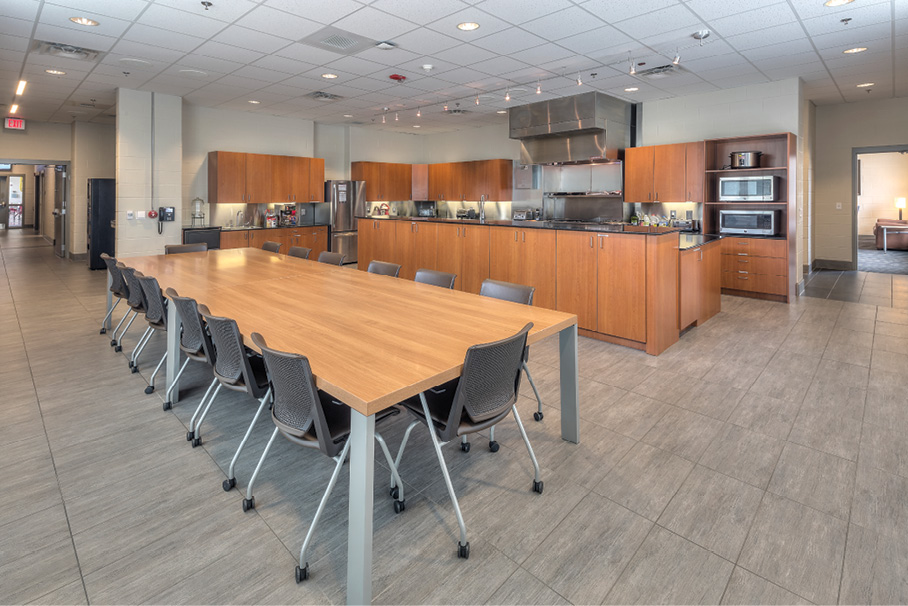 6 Glenmont Station 18 has an open-space-concept kitchen and dining area. 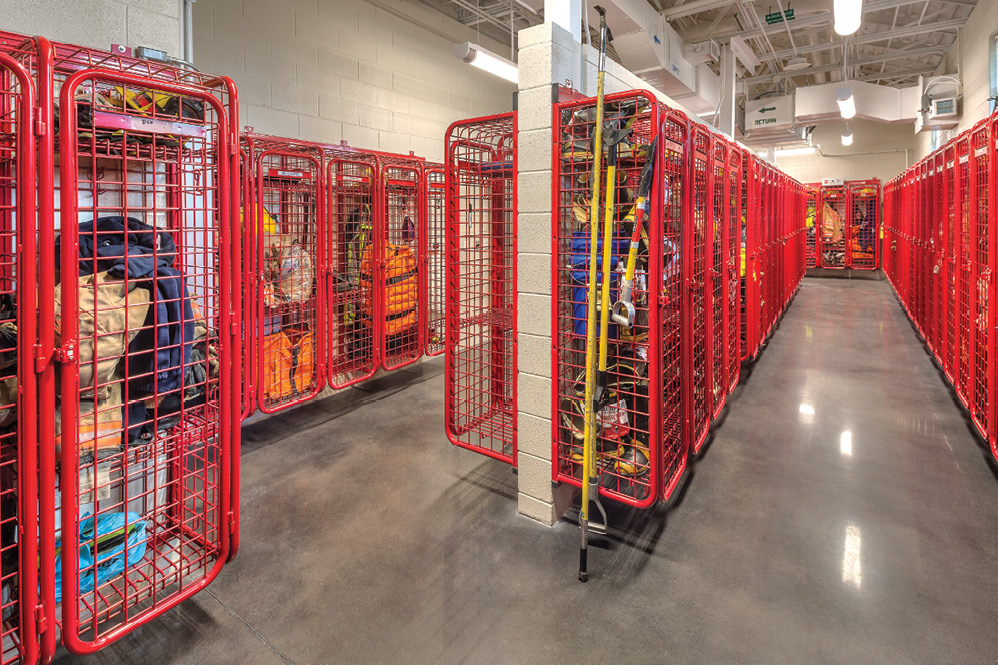 7 The dedicated turnout gear room is located off the apparatus bays, as are a decon area and bathrooms to use prior to being decontaminated. 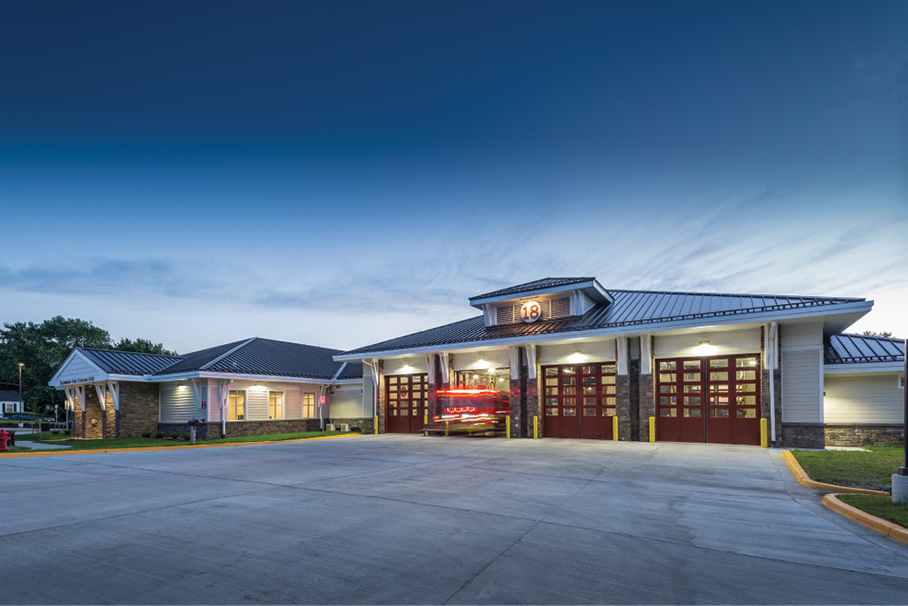 8 The exterior of Glenmont Station 18 is made up of cementious siding and stone veneer, while the hip roof is metal sheeting. 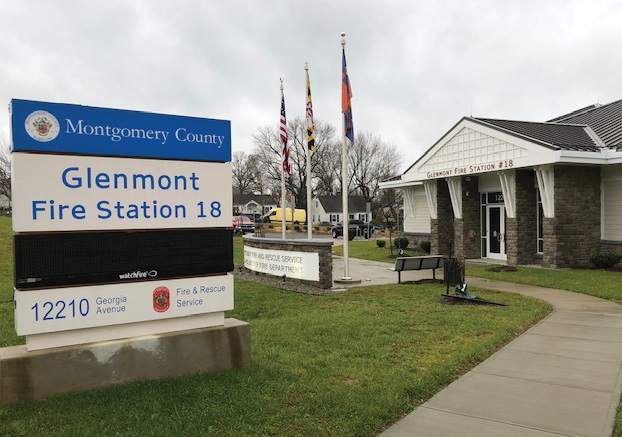 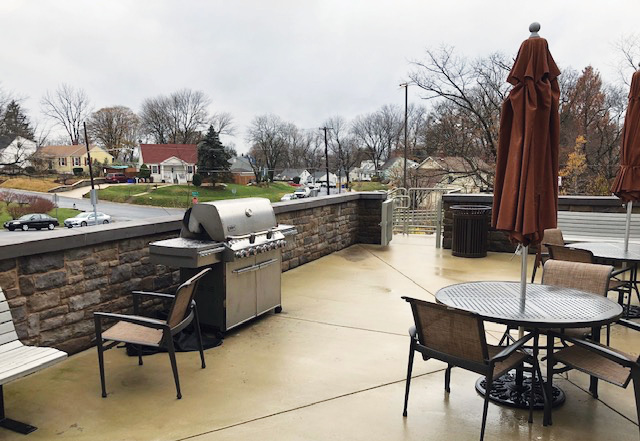 10 The barbecue and patio area off of the firehouse’s kitchen. 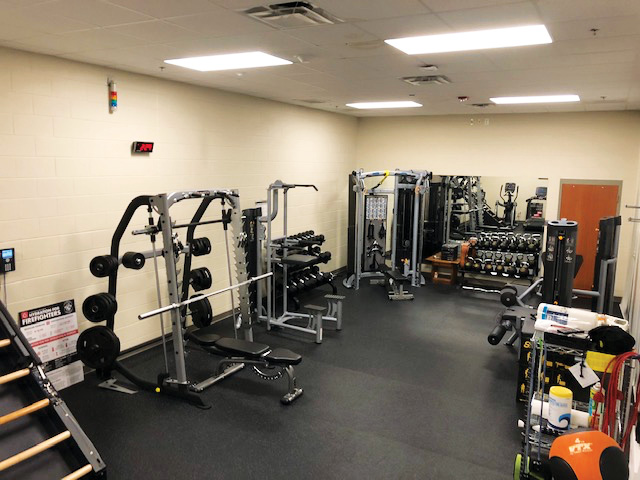 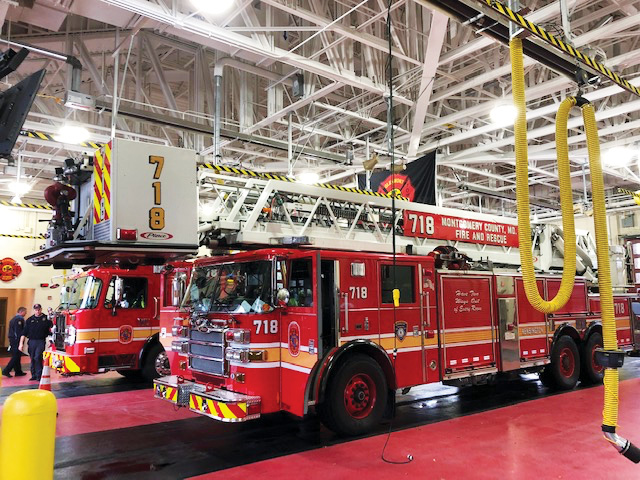 12 The apparatus bays at Glenmont Station 18.

Scheuerman points out that two Montgomery County employees were instrumental in working with Hughes Group on the design and construction of Glenmont Station 18. “Charlie Edwards, capital projects manager, and Behrooz Alemi, senior architect and project manager for construction, were very involved in the project,” he says.

Goldstein says that the Fire & Rescue Service had extensive involvement in the design of the station and notes that “Lynn Reda (principal) and her partners at Hughes Group Architects have such a good knowledge of fire station design that we are glad to have worked with them on this project as well as on other ongoing fire station projects. They are open to ideas from us, and working with them makes the process so much easier.”