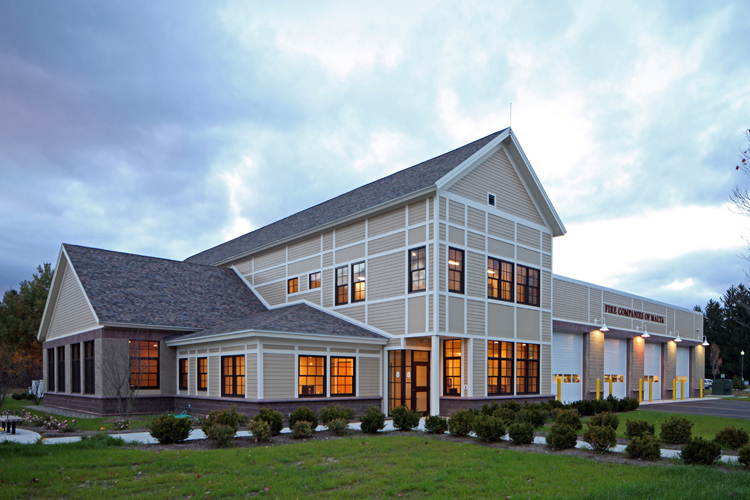 Two upstate New York volunteer fire companies, each faced with the need to upgrade their individual substations located near the center of the town of Malta in Saratoga County, came up with a plan for a shared fire station that suits the needs of each company, as well as providing faster emergency response to citizens in both fire districts.

Malta Ridge Fire Department contracts with the town of Malta to provide fire protection, while Round Lake Hose Company provides fire protection as a village department. Six years ago, a fire survey audit performed by an independent organization showed that both fire companies have good main stations at the north and south ends of the town but that both companies’ substations near the center of town were subpar, basically garages to house apparatus.

Steven Rowland, principal at Butler Rowland Mays Architects, who designed the new joint station for the two fire companies, says one of the driving forces for a new station was a large development in their coverage area, including a number of multistory buildings with very little access. “In addition, Malta Ridge had a new ladder that was going to be delivered, and it needed to add an extension to a temporary bay to house it unless it could be moved into a new station,” Rowland points out. 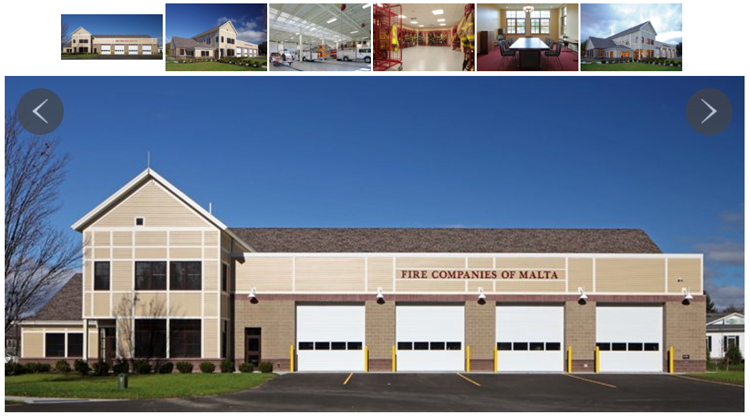 Peter Shaw, former chief of Malta Ridge, says the two fire companies considered having a development corporation build a new station and then rent if from the corporation, but discarded that idea. “They formed the Fire Companies of Malta (FCOM), a nonprofit organization, where three members from each fire company sit on the board of directors, to build the station, make payments on it, and run manage the fire station,” Shaw says. “FCOM borrowed money from each organization to build the station, and the fire companies have a 99 year lease on the building.”

Rowland notes that the new joint station has four drive-through, double-deep apparatus bays; a turnout gear room with open lockers and adjacent male and female bathrooms with showers; a laundry and decon room, offices for each fire company; an office for the FCOM; a ready room for firefighters; and a board of directors meeting room that also serves as a public room.

The $3.2 million structure is 14,000 square feet, has a primarily steel frame with an exterior of fiber cement siding and masonry, a pitched main roof of asphalt shingles, and a low slope membrane roof over the apparatus bays with a clerestory roof monitor to let natural light into the bays. The apparatus bays hold Malta’s new 100-foot aerial platform, an engine, and a brush unit, as well as Round Lake’s engine, brush unit, rescue truck, and boat.

Rowland says that the new station has radiant floor slab heating throughout, two separate air handling systems, and a mezzanine roughed in with plumbing and electrical that can be converted into bunk rooms for male and female firefighters if such a need arises in the future. The mezzanine currently is used for storage and includes a bailout simulator used by both fire companies and also neighboring departments.

Shaw says that Malta Ridge and Round Lake volunteer firefighters are cross trained on the apparatus running out of the station. “Last October, we decided to respond to each other’s calls from 6 am to 6 pm, due to daytime staffing issues. Ninety-five percent of the time one apparatus from the new station can handle a situation,” Shaw notes. “Being able to get that one vehicle fully staffed and out the door is great, and going out with mixed fire company crews to fires has worked out well for both companies.”