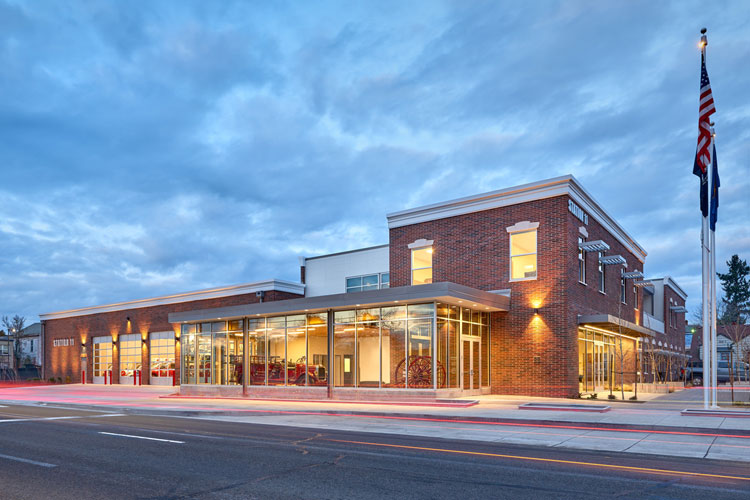 Mackenzie has designed and built the new fire headquarters for the Albany (OR) Fire Department, renovating its Fire Station 11 that was 66 years old. It didn’t meet current building and energy codes or ADA accessibility requirements and lacked the space and flow to meet the fire department’s operational needs.

Jeff Humphreys, director of architecture at Mackenzie, says that extensive water infiltration problems and the threat of building collapse during a major earthquake meant that something needed to be done to the Albany headquarters station. Humphreys notes that Mackenzie had done work previously for the city of Albany on a seismic upgrade and remodel of a different fire station. They were able to give the city some guidance about design and construction for the headquarters station.

Mackenzie led a needs assessment process for the city of Albany to investigate issues associated with its aging fire facility and to define possible solutions. “Through this process we determined, along with the city, that a new station was the most economical path forward,” Humphreys says. “We were asked to propose for both the new fire department headquarters, and a new police headquarters to be constructed at a different location,” Humphreys points out.

He notes that the city wanted the competing design teams to interface with the community, which meant displaying three visual boards of their site plan, design, and floor plan at the city library for a month where citizens could comment about what they liked or disliked, both at the library and online. A successful bond campaign and funding from several additional sources, including urban renewal grants, allowed the city to complete the project. “Mackenzie pursued both the fire and police projects and went through the proposal, design and presenting concept interviews and were able to win the contracts for both projects, partly because of the value of dealing with the same people and firm for the two projects, thus reducing cost and simplifying maintenance.”

The resulting fire facility encompasses 24,000 squre feet with eight drive-through apparatus bays, five of which are double-deep. The new headquarters also has living quarters, space for fire department administration staff, a large community room for meetings and training, and serves a dual function as an emergency operations center. 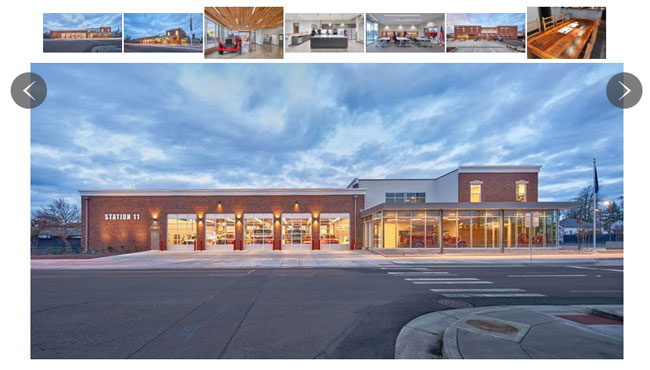 “Albany is a very old city, and its headquarters station is the city’s downtown core,” Humphreys says, “which has many turn-of-the-century structures, so the city wanted to keep that older flavor with the new headquarters fire station. “In the new building, we put in cornices and flat arches above the windows and added a broad, extensive glass area in the lobby and community room. The structure is a blend of new and old ideas, with the exterior walls being made out of structural brick along with cement board siding for contrast.”

The ground floor of Albany’s new station houses the apparatus bays as well as its support areas, such as a decon room, turnout gear room, tool room, and EMS supply room. The rest of the first floor consists of administrative offices, where there are five fire staff members in the fire marshal’s office; and offices for the chief, assistant chief, ambulance officers, and a break room.

He points out that the station’s lobby displays several vintage fire apparatus, including a 1927 American LaFrance pumper, an antique steamer, and an antique hand drawn hose wagon. “Off the lobby is the community or public education room used by the fire marshals, who give coaching to citizens and their children about fire safety,” Humphreys says. “The meeting room also is used by the fire department for training and has direct access to the front plaza to the south by double doors.”

Mackenzie says that his firm used reclaimed wood from a structure on the site of the Ralston Building, a local landmark, for the ceiling area of the lobby and the main wall in the meeting room.

The second floor of the station has two interior sliding service doors of wood reclaimed from the Ralston building in the kitchen/dining/day room area. Also on the second floor are eight bunk rooms, each with a bed, desk, and wardrobe with four unisex toilet/shower rooms adjacent to them. “The bunk rooms wrap around the toilet/shower rooms, and each firefighter has a separate locker in that area,” Humphreys says. There’s also a physical training room on the second floor as well as two stairways (front and back) and two fire poles near each stair to access the apparatus bays.

“We also incorporated roof-mounted solar panels on the fire headquarters that cover the apparatus bays,” Humphreys says, “and they generate enough electric power to handle all the lighting in the entire building.” Besides the photovoltaic solar array, other sustainable items in the station include strategic natural daylighting, and an onsite storm water retention system.