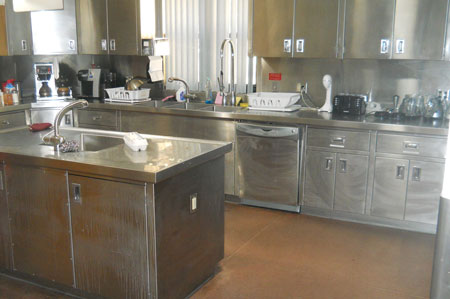 Kitchens: Designed To Be “Heart” of the Fire Station

The kitchen often serves as the heart of a fire station, a place where firefighters might congregate for a meal or after a call to grab some additional nourishment or hydration.

The design of firehouse kitchens varies around the country, from small, utilitarian kitchens to layouts that emulate well-appointed residential kitchens to areas that rival commercial kitchen designs.

Role of the Kitchen

Ken Newell, principal in Stewart-Cooper-Newell Architects, observes that as the kitchen is the heart of a personal home, similarly firehouse kitchens serve the same role. “As architects, we consider the kitchen the heart of the firehouse, one of the most important spaces in the building,” Newell says. “When designing a new firehouse, we spend as much time talking about kitchens as any other area in the station and find a wide range of what firefighters consider important in a kitchen, depending on the type of department, from small volunteer fire companies to large career departments.”

Newell points out that the kitchen often becomes the social activity area in a fire station, followed by the day room and other firehouse spaces. “Most of the interaction among firefighters happens in the kitchen, especially now with individual sleeping rooms in many departments,” he says. “Most fire departments want their kitchens open to their day rooms to make it a free-flowing space.”

Jim Zwerg, architect and facilities manager for the Phoenix (AZ) Fire Department, says Phoenix firehouses don’t have open dorms anymore, so the main hangout for firefighters is the kitchen and dining area of the station. “At some of our stations, we’ve removed walls to make the kitchen, dining area, and day room all one open area because that’s where the socializing happens throughout the day,” Zwerg points out. “So, the kitchen and dining spaces are a primary point of interest in firehouse design.”

Zwerg adds that the location of the kitchen is important. “You want to have the kitchen and dining area in close proximity to the apparatus bays,” he says, “and also near the front door in case someone comes to the station in need of help. Also, you want to have an exterior door to a patio with a barbecue and an open-able window to pass food through on trays.”

Bob Mitchell, principal at Mitchell Associates Architects, says that firehouse kitchen design is usually related to the events the fire department does with its kitchen. “We see a dividing line for kitchens between volunteer and career fire departments,” Mitchell says. “Typically, volunteer firefighters are not eating in their kitchen but rather are using it to prepare food for events. Career department use of a kitchen is just the opposite. Then there are blended departments of career and volunteer firefighters, which is where the issue gets more complicated.”

Mitchell noted his firm is designing a firehouse for the Peekskill (NY) Fire Department, which is blended. “We originally designed two kitchens and two day rooms,” he says, “but the city government said it only wanted a single kitchen, so we redesigned the station so there will be a day room on each side of one kitchen.”

The Phoenix Fire Department uses all stainless steel for cabinets, countertops, and islands, Zwerg notes, pointing to the ruggedness and durability of stainless steel, as well as its ease of cleaning.

The career department has 58 stations, typically with 12 beds per station, Zwerg says, running from a single-engine-company station to multiple-unit stations with proportionally larger kitchens and dorms. “We might end up with six refrigerators in the kitchen for a station that has five bays and a battalion chief,” he says. “We mainly use residential refrigerators and allocate them as one per shift per kitchen but have some stations with commercial fridges in them.”

Newell says he always puts in an emergency shutoff linked to all gas-operated appliances in a kitchen. “It’s a mushroom-shaped red button that can shut down everything when firefighters go out on a call,” he says. “We also can do the same with an all-electric kitchen where the button trips a master circuit breaker.”

On the issue of a commercial vs. residential kitchen designation, Newell notes that if the kitchen is designated as commercial, it must have separate hand-washing, food preparation, and cleanup sinks. “Also, if there’s a commercial dishwasher in the kitchen, it will require a Type 3 hood.”

Mitchell says that he designed a kitchen for the fire-rescue station at Otis Air Force Base in Buzzard’s Bay, Massachusetts, that uses stainless steel for all of its surfaces-countertops, tables, sinks, cabinets, stoves, and refrigerators. “And for the Foxborough (MA) Fire Department kitchen, a career department, we used diamond plate on some cabinets, and the firefighters had a large dining table made with a bowling-alley-type surface that had the department’s seal inlaid.”

Zwerg points out that lighting and ventilation are important issues that shouldn’t be overlooked in kitchen design. “You don’t want stagnant air or oxygen burning off near the stoves,” he says, “so we went with pilotless ignition on our ranges. It’s also important to have good natural light, so we have gone to all LED lighting because of the white nature of the light, which has reduced injuries.”

Newell agrees on the importance of kitchen lighting. “You don’t want it lit up like a gym,” he observes, “but you want a warm, comfortable feeling with the ability to ramp up the lighting when needed. And, supplemental air movement is important too, which is why we commonly put ceiling fans in station kitchens, which heat up pretty fast.”

Newell says that when considering floor materials, departments should make sure they will last. “Vinyl composition tile is the cheapest way, but it needs a lot of maintenance,” he points out. “We recommend either stained or polished concrete surfaces; terrazzo; or even rubberized floors, which are easy to maintain but take a lot of abuse. And, polished concrete doesn’t have to be stripped or waxed.”

For kitchen floors, the Phoenix Fire Department uses honed concrete floors. “There’s no waxy sealer on the floors, and you can spill anything you want on them,” Zwerg notes. “It doesn’t stain and cleans up with soap and water.” And for practicality in a firehouse kitchen, most firefighters like pot racks instead of cabinets, he adds, “so make sure the pot rack is heavy duty to handle all the skillets and pots they’ll hang on it.” 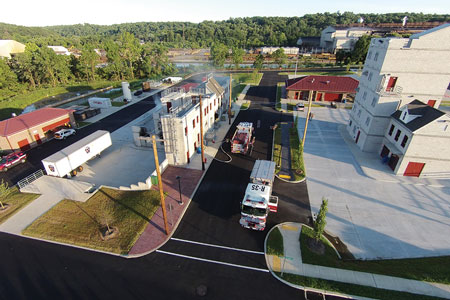 This issue’s coverage of a F.I.E.R.O. 2015 Honor Award Winner is not a fire station. Instead, it is one of the coolest fire training academy layouts and building configurations you will ever see. The Chester County (PA) Public Safety Tactical Training Village was designed by Manns Woodward Studios in association with Stewart-Cooper-Newell. What makes the “village” so special is the arrangement of various fire (and police) training “buildings” and props into a compact village that mimics the layout of towns in the area. Not only does it create degrees of difficulty in meeting tactical objectives, it allows the setup of various training scenarios in only four acres. Training takes place from the confines of a “real” street, not from a huge asphalt area in front of an isolated training tower.