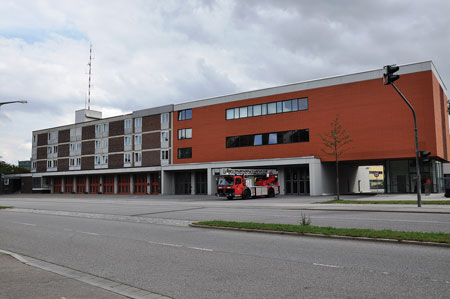 Welcome to central Europe-Germany, to be precise-where fire stations tend to be a little bit larger than in the United States. A station with more than 30 bays is completely normal in towns and cities. One example is the Regensburg Career Fire Department (CFD), in the city of Regensburg in the Free State of Bavaria in southern Germany.

To get an idea of the response area, Regensburg is a city of 31 square miles with a population of 180,000. As for the danger potential, the city has everything except a subway and tram line, coal/nuclear power plant, international airport, or space center.

The Regensburg CFD covers all of the city area first due. In case of larger scenarios or more alarms than the CFD can handle on its own, it receives support from some of the 11 volunteer fire department stations, each with two to three units that are scattered around the city area. Additionally, there are three industrial fire departments from BMW, Continental, and Infineon.

The long list of apparatus in the sidebar brings up some questions. Why aren’t there several stations scattered in the city? How much staff is needed? How do they manage all that? First, here is insight into the station and what belongs to it.

Behind the main building there’s a huge backyard, which is used as training ground and helicopter landing zone. Around the backyard, there are smaller halls with a hose-cleaning station, SCBA refill and repair station, apparatus repair station with two bays, storage facilities, and a separate equipment pod hall. On one end of the station ground, there’s a parking lot for all crew members, and on the other end there’s a sports ground.

Without the staff in the offices and the command center, the station is permanently staffed with 21 firefighters. More apparatus than firefighters? How is that possible?

Unlike in the United States, there are no “engine crews” or “truck crews” that will always only be on an engine or a ladder. Apart from the inspection chief and the crew on the command van, each firefighter is assigned to two, three, or even four different units in the same shift. Those units are unlikely to be dispatched together to one call, but in case one of the unit’s crew members is already gone with another unit, another firefighter can simply jump into the empty position. Personnel are all trained on the engines, rescue trucks, and aerials and rotate the primary positions every three weeks. So, they don’t just have the theoretical training but actually really “know” their apparatus. The training and staffing are laid out to have a very flexible department that can cover a whole city with relatively few firefighters

What’s up with that system of pod carriers and special equipment pods? Some equipment might be so special that it’s not needed very often, like only once to maybe a dozen times per year. It would be economically inefficient to purchase and maintain 15 complete special equipment trucks. Instead, many German fire departments purchase one or several pod carriers to carry a greater number of equipment pods. Some departments set more onto the pods system than others. So, there are also departments that have a separate hazmat truck, for example.

The list of apparatus (see sidebar) is simplified a bit. For example Rescue-Engine 1 would be called “Florian Regensburg 40/01” on the radio. The name Florian is given to all units operated by fire departments. In the middle there’s the name of the municipality it comes from, and then 40/01 isn’t the number of apparatus but actually both the classification of the type of the vehicle and then the number. Each classification of emergency vehicle has its own number on the radio, which makes it a lot easier for the chiefs and other crews. By hearing “40,” they don’t just know that it’s an engine or rescue-engine, but they already know the minimum amount of water carried on board, pump capacity, and list of equipment on board. The radio call signs are the same all over the state, so even if you are working with crews from another place or respond in another district and never have seen their apparatus, they know what’s coming up when they hear the vehicles on the radio.

If a department has more than one station, the station number is added in front of the vehicle classification. For example, “Florian Augsburg 01/30-02” stands for 105-foot Tower Ladder number 2 from fire station 1 in Augsburg. It sounds complicated when you are not used to it, but the system has many advantages.

Unlike in the United States, where you have many small stations scattered around, there are fewer but larger stations in Germany. The state’s capital city of Munich, with 1.7 million inhabitants, has only 10 CFD stations and Regensburg only 1. Does this mean bad response times? Not really.

The legal response time limit is 10 minutes. The Regensburg CFD covers 95 percent of the city area within a six-minute drive at an average speed of 40 miles per hour (mph) in city traffic. Where there are many small stations, apparatus are approaching separately from all different directions. In Regensburg, it’s only one station and a convoy of apparatus, which is quite common for Germany. One convoy means that traffic has to pull over only once instead of multiple times. But to make it even faster and safer, as soon as an alarm is set off, the command center switches all traffic lights between the station and the scene, giving the apparatus a green wave. In contrast to the Opticom system, all lights are switched at once, giving the traffic the opportunity to flow off. Thus, the CFD can literally fly across the city at an average speed of 40 mph, with little traffic ahead and relatively little use of any siren.

In the case of a normal fire alarm (automatic or activated fire alarm and reported fires), the Regensburg CFD responds with five units: the inspection chief car, command van, Rescue-Engine 1, Tower Ladder 1, and Rescue-Engine 2. If it’s a severe crash on the highway, the department responds with the inspection chief car, command van, Rescue-Engine 1, heavy rescue truck, tanker, and Engine 4 pulling the traffic safety trailer. Additionally, a volunteer fire department would be dispatched.

Of course, there isn’t always a huge convoy responding. When the CFD supports EMS on a medical call, for example to open a locked apartment door, only the technical rescue van responds, and a crash with multiple cars in city traffic can easily be handled by the technical rescue van and a rescue-engine. In contrast to many other CFDs in Germany, the Regensburg CFD doesn’t operate any EMS units, no large-capacity ambulance bus, and no truck cranes. EMS is covered by four EMS providers, and recovery jobs are performed by a very large private recovery company.

Those convoys of predetermined units range in size from a minimum of three units up to 10 units, depending on the department, and are very common in Germany. There are tactical reasons for this. With the city of Regensburg being a prime example, an “old” city in Germany isn’t just a few hundred years old but usually 1,000 to 2,000 years old. The streets in the medieval city centers weren’t designed for fire trucks back then and thus can be very narrow-so narrow that an American tiller truck wouldn’t have a chance to get to the scene there. Limited available space in some streets has an effect on German apparatus as well.

The tower ladders hardly carry any equipment: no water tank, no pump, no ground ladders. All that equipment is carried by the engines or rescue-engines, which is a tactical reason they respond together in a convoy. On the bright side, the ladders are extremely versatile: They have a very wide range of operation, including a great below-ground performance as well as an up-and-over capability because of an articulated ladder section. The ladder structure is strong enough to be used for lifting operations up to 8,818 pounds. Some city centers are so tight that the departments purchase them with all-wheel steering despite the truck chassis already being very compact. In Regensburg, none of the tower ladders has all-wheel steering, but Tower Ladder 1 has five instead of four ladder segments to achieve a shorter overall length for the truck.

Engines are laid out completely different compared with American engines. For example, there are no hosebeds. Here are some specs of two Rosenbauer AT3 rescue engines:

The two old engines from the Regensburg CFD would be classified as rescue-engines according to the new standards because they basically carried the same equipment on board.

Past, Present, and Future

The department’s current station was built in 1964 and extended in 1981 and 2001. The station’s design doesn’t meet the current requirements concerning space, and the old part isn’t in the best condition either. For approximately $34 million, the old part of the station will be torn down and a new station will be built at the same spot. The latest part of the main building will be integrated into the new station. The new station will have 57 truck bays to house current and future units. A second station at a different location might be realized in 10 to 15 years.

PAUL FRENZEL recently took the state examination as a paramedic for German Armed Forces and was a trainee at the Bavarian Red Cross, the German Red Cross, and a private EMS provider. He runs the “Enjoy Firefighting Productions” YouTube.com channel.

Fire Apparatus of the Regensburg CFD

Which apparatus are housed at this large station? The list is dominated by BMW, Mercedes-Benz, and MAN and includes the following: