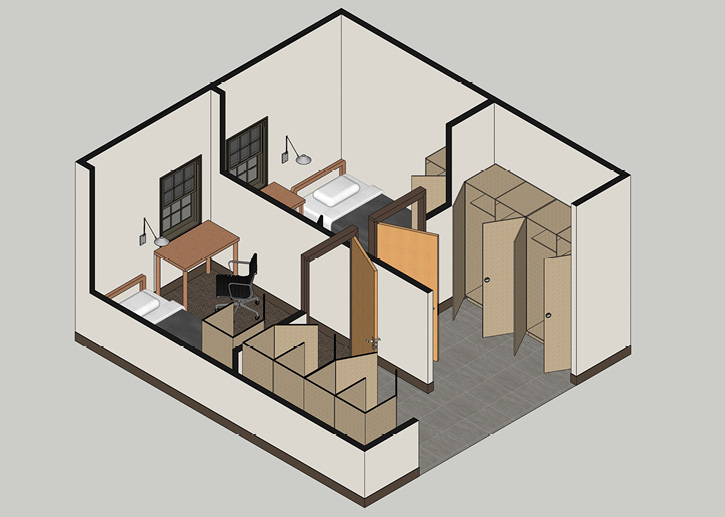 Architects and fire departments are working together to design gender-neutral spaces in fire stations to allow men and women privacy while on the job, living and working in the station.

These areas include dorm rooms, bathrooms, locker rooms, and other rooms where architects and fire departments are concerned with producing gender-neutral spaces.

Keith Driscoll, senior associate architect for Hughes Group Architects, says that the biggest challenge in designing fire station living spaces is creating a good balance between privacy and inclusion. “It’s easy enough to design separate facilities for male and female firefighters to sleep, shower, and change in privacy,” Driscoll points out, “but that can change the dynamic of wide-open spaces where the crew gets together. Once you provide more privacy, crews are sometimes not spending as much time together having conversations and interacting, activities that help make them a cohesive group.”

Driscoll notes that some jurisdictions still have common bunk rooms with separate locker rooms and bathrooms/showers for each sex, while other departments opt for either two- or four-person bunk rooms or go completely to private bunk rooms.

Klindt Breckenridge, principal at Breckenridge Group Architects Planners, says he has seen a trend among his clients of moving away from totally open dorms and open dorms with cubicle walls. “The departments are concerned with privacy,” Breckenridge says, “and also about the issue of sleep deprivation and preventing the transmission of viruses and diseases in large open spaces. Some departments have even had weather stripping put on their private dorm room doors.”

Paolo Carissimi, principal at The Galante Architecture Studio, believes that gender neutrality is a complex matter because of the many factors that come into play. “One of the first challenges is the fact that it’s nonregulated territory,” Carissimi observes, “so gender-neutral design becomes based on best practices, which are recommended to the client. Each fire department is different, with its own identity, and some are very sensitive to the subject.”

Carissimi points out that a department almost always needs to have more square footage in a building that has a well-made layout for gender neutrality. “That’s a challenge if you are working with a site that restricts the size of the building and also when doing station renovations,” he says.

2 A single bunk room at Chandler’s Station 2811 designed by Breckenridge.

4 Galante designed this firefighters’ dorm with cubicle walls for a renovation and expansion of the Fire Department of New York’s Engine 63/Ladder 39 Station. The station has two single bunk rooms for battalion chiefs.

Scott Csendes, vice president of the Civic and Public Safety Group at KZF Design, says the typical gender-neutral bunk room has a bed, usually a desk or nightstand, and a set of triple lockers for bedding either inside or outside the room. “By applying gender-neutral practices in the bunk area as well as restrooms/showers and lockers, overall it saves square footage that gives you more flexibility to use the space elsewhere,” Csendes points out. “With an open-concept bunk room for men and women, where there are separate open rooms, you wind up with more corridors and doors than if you built 12 single bunk rooms. Single bunks provide the most flexibility.”

Bob Mitchell, principal at Mitchell Associates Architects, says he has been designing single bunk rooms in fire stations for more than 15 years. “If there’s only one person in the room, the gender issue is gone,” Mitchell observes. “But there are some clients, like the Yonkers (NY) Fire Department, where they wanted the everyone-in-one-room model but added a separate room with two beds in it for females.”

Ken Powers, principal at Perlman Architects of Arizona Inc., says Arizona has been ahead of the curve in adopting gender-neutral designs. “The Phoenix (AZ) Fire Department and other large departments in the area transitioned from totally open dorms to partially open dorms with dividers to private dorms about 15 to 20 years ago,” Powers says. “In the past seven years or so, 99 percent of the stations that we have worked on in Arizona, Nevada, California, and Washington have all had private dorm rooms. Each room includes a bed and bed platform with linen storage, three lockers, and a small desk or work area.”

In terms of bathrooms and shower areas in fire stations, Powers sketched out the changes that have developed over the years. “The evolution of bathrooms went from group male and group female bathrooms/showers to Jack and Jill bathrooms/showers with two sets of doors that can be locked to single private bathrooms/showers, which are considered unisex and gender-neutral. Some departments also have considered private showers with a dressing area outside behind doors, private toilet areas, and a group sink area—a layout we see popping up in restaurants, schools, and other public facilities.”

Gerrald Adams, Perlman’s commercial director, points out that private bathrooms/showers in fire stations are not necessarily the most expensive option. “Most departments with gender-neutral bathrooms plan for two to three dorms per bathroom, which takes up a lot less space than the approximately 125 square feet in a group bathroom,” Adams says. “In a group bathroom, you’d have four partitioned toilets, four sinks, and four showers for men and typically 50 percent of those numbers for women. With private bathrooms/showers, the partition cost is eliminated, there are fewer fixtures, and you have the flexibility to locate the bathrooms closer to the dorm area they are serving, where cluster bathrooms usually are in the center of the station core.”

Driscoll says getting the right number of showers and toilets for males and females is a challenge that depends on the department’s ratio. “So, a lot of departments are going to single bathrooms/showers, with lockers nearby in hallways or in the bunk rooms,” he says. “The typical private bathroom would have a sink, toilet, and shower, and for a station of 12 to 16 bunks, you would have about half that number of private bathrooms/showers.”

6 A decon area, a shower, clean clothes lockers, and a turnout gear area in a fire station designed by Mitchell Associates Architects.

8 A decon shower area off an apparatus bay in an Arizona fire station designed by Perlman Architects of Arizona.

Breckenridge says that instead of separate cluster bathroom/shower rooms that would each handle four men and four women, a department could put in five gender-neutral private bathrooms/showers to handle those eight firefighters. “It would be an apartment-style restroom with toilet, sink, and shower all in the same compact square footage,” he says. “Private bathrooms are much simpler in construction, where you don’t have rows of sinks or urinals, and the shower is usually a square with tile or terrazzo and a glass door, so it’s not a bathtub type footprint.”

Carissimi says Galante recommends that, when possible, departments should choose private single bathrooms, each with one shower, taking up about 60 to 70 square feet, at a ratio of one private bathroom for every three firefighters.

Csendes likens the private bathrooms being built in firehouses to those “not unlike a hotel bathroom. There’s a shower stall, toilet, sink, and vanity or small closet, with a lock on the door,” he says. “For every three or four firefighters, you will want to have one single occupant restroom/shower room.”

Adams notes that some departments, like the Tucson (AZ) Fire Department, have installed nursing or wellness rooms in their stations. “These rooms are separate from private bathrooms and usually have a comfortable chair and a small refrigerator in them,” he points out. “The gender-neutral layout of the station allows them to do that.”

Gender neutrality is also an issue in the decontamination rooms or areas off apparatus bays. Driscoll notes Hughes Group has designed completely standalone shower facilities in a station’s decon area. “Sometimes it’s a single-user bathroom with a sink, water closet, and shower,” he says, “or it can be a sink and toilet only, with separate private showers. Usually there’s a set of lockers in the decon area so the firefighter can grab clean clothes, go into the decon bathroom to remove soiled clothes, shower, then don the clean clothes. Typically, there’s a laundry facility in that area, too.”

Carissimi notes that decon areas aiming for gender neutrality should have a common area with a large decon sink and a minimum of one eyewash station plus one or two private showers and lockers for clean clothes.

Csendes says KZF has designed gender-neutral decon areas for a number of departments. “Typically, after gross decon, the personal protective equipment (PPE) goes into the laundry decon room that has a washer, dryer, and hand sink,” he notes. “Off that room is a room with cubbies holding shorts, T-shirts, and underwear. The firefighter takes the clean clothes into a single-occupant shower room that has a sink and toilet, removes contaminated clothing and bags it, showers, and puts on clean clothing. Usually, the station has a minimum of two private shower rooms in the decon area.”

Mitchell has designed decon areas where firefighters move from a laundry room through a hallway that has lockers holding clean clothing in a zipper-seal bag. “They move into the individual showers, which have doors; remove and bag their dirty clothes; shower; and put on clean clothing,” he says. “Often, they will wash their contaminated clothes in the decon laundry on a steam cycle before they take them home.”

Adams says that Perlman often recommends an exterior gross decon area with an outside shower to clean off PPE and an inside decon room that includes a private area behind a door where a firefighter can disrobe, shower, and put on clean clothes. He adds that for one department, Perlman designed a common decon area off the apparatus bays with four shower rooms and a mini locker room adjacent to a decon laundry area.

Building a Fire Station Must Be Done by Design