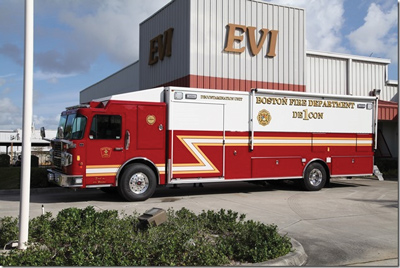 Fire departments don’t always have the luxury of putting a newly purchased pumper, aerial, or rescue truck in a brand new fire station.

Most often the new apparatus has to live in an older station and sometimes in a very old station. Some of the vehicle housing considerations include its overall height, overall length, overall width, and weight. Such issues mean that manufacturers have to make alterations to their typical apparatus to fit those pumpers, aerials, and rescues into older firehouses.

Chad Trinkner, senior director of business development for Pierce Manufacturing Inc., says that the biggest issues Pierce faces when building a new vehicle to be housed in an old station are the overall height and overall length requirements imposed by the old firehouse. “Fire departments today need to carry more water and equipment on their vehicles than when many of these stations were built,” Trinkner points out, “which means bigger vehicles trying to squeeze into smaller spaces.”

Trinkner notes that Pierce has used its Pierce Ultimate Configuration (PUC) in many instances to get a modern pumper into a smaller, older station. “The PUC eliminates the pump house, which means the vehicle length is shortened so we can do a 1,500-gallon-per-minute (gpm) pump on a 29-foot overall length and still have lots of equipment space,” he says. “To accommodate short overall height requirements, we can make adjustments to our TAK 4 independent front suspension to offer a reduction of several inches of height. And for aerials, we make five different pedestal heights for our platforms and ladders, which allow the turntable to set lower and get under a low overall height restriction.”

Rick Suche, president of Fort Garry Fire Trucks, says he’s found that many firehouses on the East coast of the United States and Canada are older, historic stations-usually with height and length limitations. “Often we will put a rub rail on the back of a truck instead of a tailboard to save space,” Suche points out. “We’ll also shorten up the front compartment and take it down to 12 inches, with our smallest pump panel at 36 inches wide. It’s always a challenge because fire departments want manufacturers to put 10 pounds in a five-pound bag.”

Suche says enclosed pump houses on pumpers are about 50 percent of Fort Garry’s business, so his company has designed those pumpers to fit into older stations where the doors or ceiling heights can’t be raised. “We make a three-seat, commercial chassis, enclosed pump house pumper with 75 inches of headroom that comes in at nine feet, eight inches overall height,” Suche says. “That pumper can fit through a 10-foot-high doorway.”

According to Michael Cox, vice president of sales for Emergency Vehicles Inc. (EVI), EVI has built hazmat and decontamination trucks for the Boston (MA) Fire Department. “Both units are pretty big trucks but had length and height limitations,” he says. “One is on a tandem rear axle, and the other is on a single rear axle. But because we are custom builders who build in one-inch increments, we can build a truck to fit the space a fire department has available.”

He adds, “We first ask a customer if there are length limitations, because most old stations don’t have pull-through bays, so they might stack trucks nose to tail in a single bay,” Cox says. “We then check the door height and shape, as well as any angle of departure limitations.”

Jim Kirvida, president of Custom Fire Apparatus, says his company recently built a pumper for Fire Island Pines (NY) Fire Department that had to get around both height and length issues. “We went with an International 7400 SFA 4×4 chassis with low-profile, wide flotation tires that allows us to make the height required,” Kirvida says. “The pumper has a Waterous 1,250-gpm PTO pump for pump and roll, 300 gallons of water, a wheelbase of 192 inches, a cab-to-axle length of 81 inches, and an overall height of 103 inches.”

Bob Sorensen, vice president of SVI Trucks, notes that it is sometimes difficult for a manufacturer to deliver the entire “list of wants” that a department says is needed on a fire vehicle. “We recently built a pumper for a Connecticut department with a nine-foot, eight-inch maximum height and 33-foot maximum length,” Sorensen notes. “They wanted a certain size pump, water tank, hose load, and equipment storage. But, it wouldn’t all fit in the vehicle footprint. The department decided to give up some hose to have a larger water tank capacity.”

4 Guys built a pumper for the Economy (PA) Fire Department that was only eight feet, six inches high, according to Tyler Meekins, sales assistant at 4 Guys Inc. “The fire station had a beam going across the center of the station,” he says, “so we hit the maximum height on a 34-foot-long pumper on a Spartan cab and chassis with a 10-inch raised roof.”

Another fire department, Ford Mountain (NC) Volunteer Fire Department, had 4 Guys build a height- and length-shortened pumper to fit in an older station. “The pumper is only 24 feet long and nine feet high,” Meekins points out. “When we shortened up the wheelbase we lost some compartment space, especially because the pumper carries a 700-gallon water tank.”

Both the Kitzmiller (MD) Fire Department and the Aquashicola (PA) Fire Department had height issues in older stations, Meekins says, so 4 Guys built custom light bars into the visors of the cabs of the respective pumpers to allow them to fit in their stations.

Jason Witmier, product manager of aerials at KME, says many older firehouses are in historic districts and thus have height, width, or length restrictions either with apparatus bay doors or the bays themselves. “Some of the most overlooked things we see are the fire department measures the height and width of the door and the length of the bay but neglects to tell us it has a 12-degree sloped apron so the rig will pitch as it comes out of the bay,” Witmier says. “Or, the fire station might have a 10-foot-high door, but it has an arched opening, making it nine feet, eight inches in the corners.”

For pumpers that have to fit into tight historic stations, Kirvida often goes with a narrower body. “We always try to build on a 101-inch-wide body,” he says, “but if it has to go into a historic station, we’ll put a 94-inch-wide body on the vehicle. Also, depending on the tire configuration, we might do a ‘super single’ instead of dual rear tires to allow the body to be narrower.”

Sorensen says that typically there are trade-offs to be made in every case to get a vehicle down to the size required. SVI recently built two heavy rescue trucks with height and length restrictions for the Honolulu (HI) Fire Department that had to go into two older drive-through stations that were designated as historical structures. “They couldn’t raise the door heights on the station and couldn’t add on for more length, plus there were historic trees protected in back of the station,” he says. “And, some of Honolulu’s older stations only have 10-foot-wide doors, which makes it difficult to back in an 8½-foot-wide fire truck, so narrow door widths can be an issue for older stations too.”

Sometimes a modification to an older station is necessary to fit a new apparatus. Brett Jensen, vice president and general manager for Midwest Fire Equipment, says his company built a pumper-tanker for a Midwestern fire department that had space restrictions, especially in length, in an older station. “We got that pumper-tanker down as short as we could,” Jensen says, “and the fire department still had to put a two-foot extension in the rear wall of the station to make it fit.”

Trapper Meadors, sales engineer for Precision Fire Apparatus, says ceiling clearances and ceiling beams are the biggest problems in older fire stations, along with those that have apparatus bays over basements. “You have to pay attention to the vehicle’s wheelbase and where it falls on the support beams under the floor,” Meadors observes. “We also did two recent jobs where the angle of departure on the ramp kicks up the rear end of the fire truck on exiting the station. We had to first determine how much deviation from the norm there was and then adjust the truck accordingly.”

But, most problems are in the door and ceiling height in older stations, Meadors maintains. “We refrain from altering a chassis to make a truck fit,” he says. “We prefer to make the body fit the opening because it’s easier for us to adapt the body in our shop rather than have a chassis maker do it.”

Meadors says he’s seen trucks in a fire station stacked two deep, with the rearmost apparatus backed up to the station wall. “There was a small space in front near the door to slip by the pumpers,” he says, “but you had to leave the bay door open to get through.”

Todd Nix, apparatus consultant for Unruh Fire, is a lieutenant with the Sedgwick County (KS) Fire Department. “We bought a pumper-tanker to cover a rural area, and it was stored with another truck in a wood pole building,” Nix says. “When we ordered the pumper-tanker, we missed the total length with the tailboard and it wouldn’t fit when we pulled it in the station. We had to cut back a mezzanine that would have hit the lighting on the truck and added a parking step on the floor so when the truck’s tires hit that, you have two inches in front of it to close the door. To get in the truck, the driver has to come out of the living quarters, open the bay door, go outside and walk around the front of the truck, then back inside the station to put on his turnouts and get in the driver’s seat.”

Witmier notes that KME ran into a door arch issue for an FDNY vehicle. “They defined the overall height of their vehicles,” he says, “but didn’t consider the arch in one of the stations, so the warning lights on the outer corners were too tall.” And, some cabs can’t have light bars because of height restrictions, he adds. “You have to put a visor bar on a bracket on the front of the vehicle and then add warning lighting to the sides,” Witmier says.

Trinkner observes that there is always an answer to a fire department’s old station restriction problems. “We haven’t found a fire station that we can’t accommodate,” he says, “but it all comes at a cost for customization of the vehicle and not the station.”