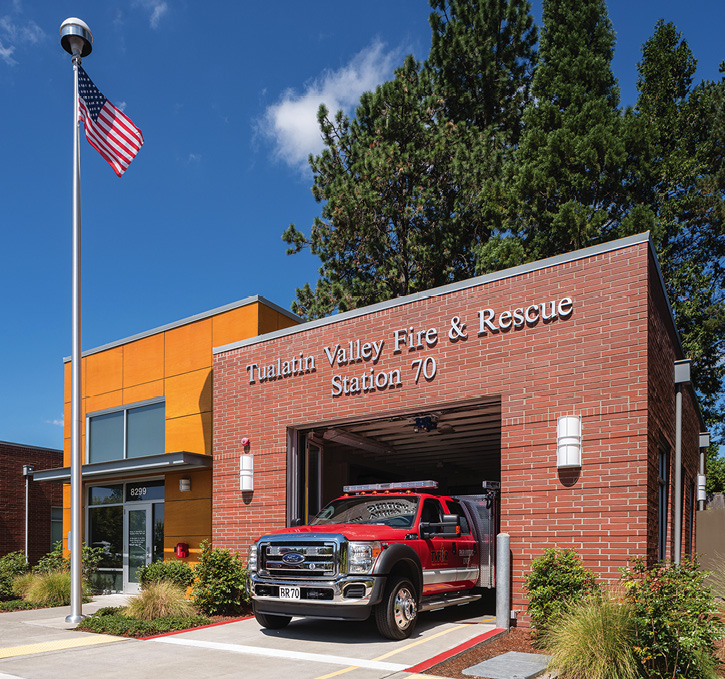 Dedicated emergency medical services (EMS) stations share many similarities with fire-only stations that don’t handle EMS calls but also have a number of special needs in terms of the structure, layout, and storage of equipment.

EMS departments and squads work closely with architects in planning and designing those spaces to make them most effective for the stations’ responders. 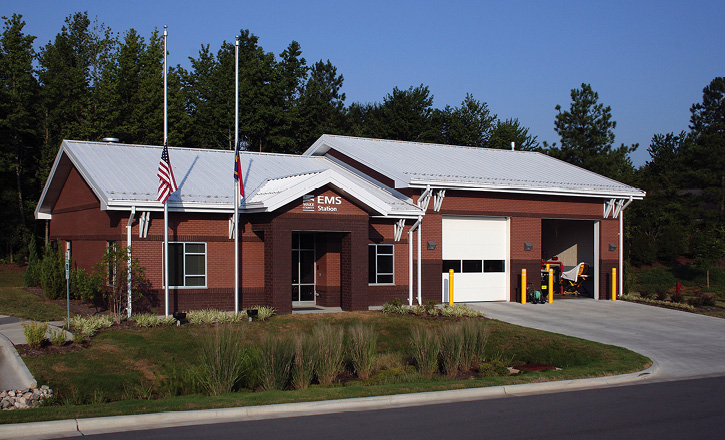 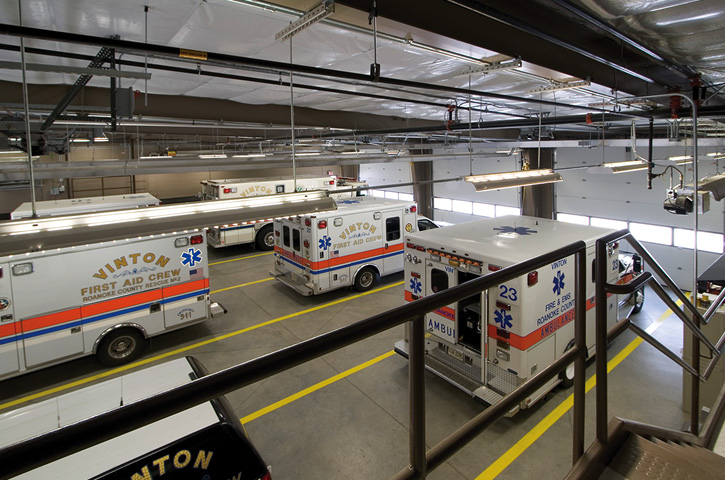 Ken Newell, principal at Stewart-Cooper-Newell Architects (SCN), says that although stand-alone EMS stations are far fewer in the United States than stand-alone fire stations or combination fire/EMS stations, their design generally is similar but with a number of special requirements, especially with regard to storage spaces, training areas, administrative areas, and support areas. “Especially if it is an EMS headquarters station, you’ll see a lot more administrative spaces in the structure as well as areas for the administrative support staff,” Newell points out. “Typically, that means more offices and work spaces not only for the squad’s officers and paramedics for report purposes but also for billing and invoicing if that’s done in-house.” 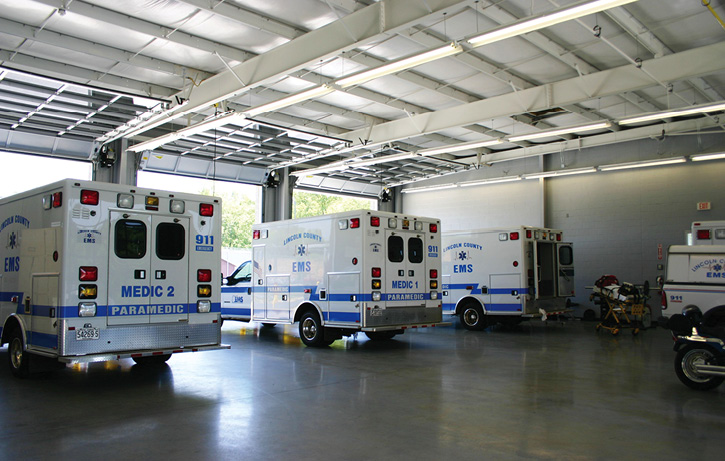 3 This EMS-only station was designed by SCN for Lincoln County (NC) EMS. 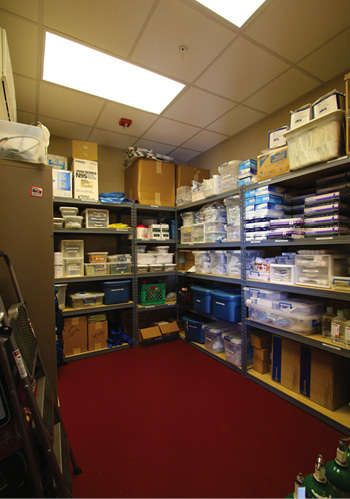 4 The medical supply room designed by SCN for the Danville (VA) Fire Department.

Newell notes that a headquarters EMS station usually will have larger training and community rooms than you would see in a fire station. “Many EMS squads are prone to bringing in neighboring EMS squads for training; also, the type of training they do, like CPR [cardiopulmonary resuscitation] and AED [automatic external defibrillator] training, requires mannequins on the floor or on tables, which means a bigger footprint for the room. For that type of training room, we would allow 25 to 35 square feet per person instead of 15 to 20 square feet per person for a fire training room. In addition, you need more storage space with EMS stations because those mannequins, AEDs, first aid and trauma bags, and other training equipment take up a lot more space than the average training supplies for fire.”

Ted Galante, principal at The Galante Architecture Studio, says that although fire stations are staffed 24/7, EMS-only stations may not be, so station security can be an issue. “With an EMS-only station, some of the buses (ambulances) might be out and about, while others might be in house,” Galante points out. “So, making the building inaccessible to outsiders and having camera monitoring are pretty important.”

In terms of designing the apparatus bays, Galante says that a generous amount of extra space is often needed. “It makes sense to have enough depth in a bay to be able to get a stretcher in and out of the vehicle, even if the rigs are double stacked in the bay,” he says. “It’s also wise to plan for a good amount of linear storage, because often stretchers are stored adjacent to the ambulance so the stretcher can be changed out or modified for a specific type of call.”

Another specific feature of EMS-only stations is secure storage for drugs carried on the rigs, Galante adds. “While you always need to provide a lot of space for medical supplies storage, we also build in refrigerated storage areas for those medications that need to be kept cool and have all the medical supplies in a locked area covered by security cameras,” he says. “Often, key fobs or pass code locks are used to gain access to the area, and with those systems, a computer can keep records of who logs in and out.”

Jeff Rhys Humphreys, director of architecture for Mackenzie Architecture, says Mackenzie designed an EMS-only station for Tualatin Valley (OR) Fire & Rescue. “Tualatin Valley wanted to be progressive and not have to roll their big rigs for all the EMS calls they were getting, so they looked to improve their coverage area with a small facility,” Humphreys says. “They found and purchased a retail pad that had a building being constructed on it and brought us on to change it from a commercial construction to a municipal facility, which requires a higher standard of construction.”

Mackenzie designed the 1,950-square-foot structure as a micro EMS station (Station 70) with one single deep apparatus bay, a day room/kitchen combination, a small fitness room, a quiet room where personnel can catch some sleep, a report room, and a unisex bathroom/shower area. “The station is set up for two to four people to work out of it,” Humphreys points out, “and, based on the way Tualatin Valley’s shifts work, their medic units usually are staged elsewhere but can work out of this station when needed.” 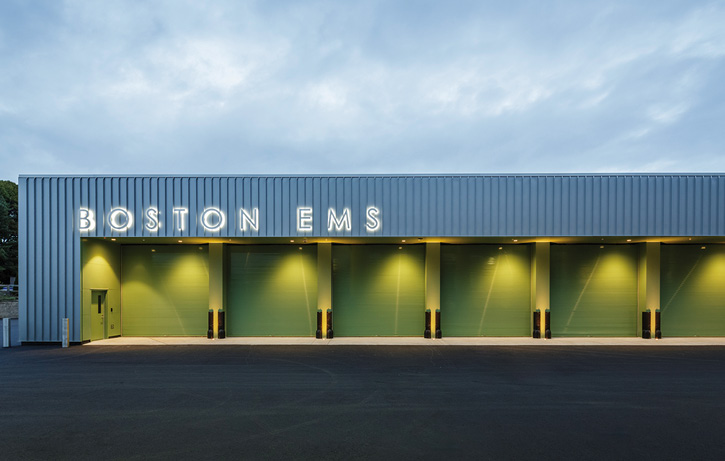 Cassandra Ulven, Tualatin Valley’s public affairs chief, says Station 70 is staffed four days a week with a medic unit and sometimes a brush rig. “There’s a high demand for medical calls in that area, and we needed to put a medic unit in there to handle them,” Ulven notes. “We have 27 fire stations, a command center, a training facility, and an operations center in our district, and this is the first time we’ve built a station that small, but it has been very effective for us.”

Many EMS-only stations, if not large headquarters facilities, generally don’t have bunk rooms for personnel, Newell observes. “A lot of EMS squads run on 12-hour shifts, which is a big difference from most fire departments,” he says. “An EMS station on 12-hour shifts doesn’t need sleeping rooms for its people, so they usually choose large day rooms with recliners where people can nap if necessary. And, if there are no people sleeping in dorm rooms, the requirement for sprinklers goes away, meaning a considerable savings in building costs.”

Newell says that a type of design used in some EMS-only stations relies on dynamic deployment of apparatus. “You have one large overhead door as the entry to the station’s bays and areas to park inside where the ambulance is serviced and restocked before heading out the back through another large overhead door,” he says. “Charlotte-Mecklenburg County (NC) EMS System has a station set up like that, which is similar to what you would see in an automobile dealership service shop. You can save a lot of money in construction because you’re only putting in two overhead doors instead of a dozen of them.”

Ken Powers, principal at Perlman Architects of Arizona Inc., says his firm has designed three fire stations for the city of Mesa (AZ) and now has been contracted to design an EMS-only station for the city: “Mesa would like to build multiple EMS-only stations around the city and had us come up with a design that could be used for a number of them.”

Gerrald Adams, a Perlman director, says the design is similar to a small firehouse but with no sleeping quarters. “We’re designing it so it could be either a two-bay or three-bay station, with a couple of offices; a day room; a kitchenette; and, in a transition area, a clean EMS room, shower area, and decon room.” Adams says. “Mesa EMS runs eight-hour shifts, so the personnel would come in and use the station, then rotate out.”

Dale Crogan, captain at Mesa (AZ) Fire and Medical and union president for the Mesa Firefighters Association, says that as the population of Mesa continues to grow, the department is running out of room at existing stations. “We are building smaller stations for EMS medical response for our alternative response apparatus,” Crogan says, “which are built on a crew cab pickup chassis with a box on the back for EMS and all-hazard fire equipment. Each unit has a four-person crew, two paramedics and two EMTs, and their primary response is all medical calls.” Crogan adds, “We currently are putting up four of these stations around the city and are looking to infill busy areas of the city with about eight to 10 stations in total.”