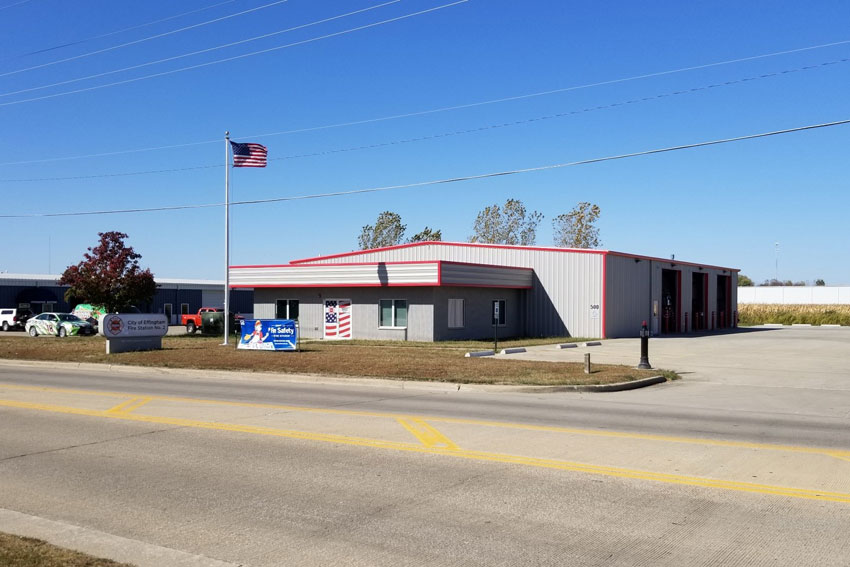 The City of Effingham was seeking to replace an aging two-bay fire station that had outlived its usefulness and lacked many modern amenities such as dedicated fitness facilities area and separate bunkroom and locker room areas for male and female firefighters.

The former fire Station 2 was built in 1971 as a remote satellite station consisting of one nondrive-through bay and one drive-through bay, a small combination kitchen/dayroom, one single “bunkroom” where sleeping areas were separated by free standing lockers, and a poor ventilation system. There was one combination bathroom/shower facility that also housed “extra lockers” for the firefighters—both male and female with no separation.

To further complicate matters, in 1971 there was no discussion of firefighter fitness and health and cancer prevention , no discussion on firefighter strength training and cardiovascular exercise programs, and certainly no one had heard of the Internet or consider the fact that the watch desk may someday house a computer. With no thought to computers and VOIP phone lines, there were no IT closets, only linen closets, and of course every station at had at least one tool room.

Back in 1971 almost anyone who was an “architect” could design a fire station—designing a fire station was basically designing a garage with living quarters. While there may have been a few architects who specialized in municipal building design, it was certainly not on the scale that we see today. Consequently in the case of former Station 2, someone thought it would be a great idea to “pitch” the apparatus floor to the center so that the water dripping off the rigs would find its way to the lone center floor drain. This of course caused the apparatus to sit at an odd angle when parked. Maybe back in 1971 it didn’t matter that much to a commercial chassis fire engine, but as the apparatus became larger and heavier, this placed an unnecessary strain on chassis component. When a 75-foot quint was added to the fleet, firefighters also had to ensure that snow and ice accumulation was kept away from the overhead door entrance or else the ladder would scrape the door entering or exiting the apparatus bay.

In addition, the station was located on a nondivided four-lane roadway with no traffic preemption to allow for the apparatus to safely when responding to calls. In many instances, firefighters had to contend with motorists who, upon seeing the apparatus leaving the station, would actually speed up to “beat the apparatus” to the roadway rather than slowing down to let the apparatus enter the roadway.

As I have learned in over 41 years of working in municipal government, no does not mean no. It simply means “not right now.”

As the new fire chief, I conducted strategic planning, involving both our full-time and paid-on-call staff. One of our primary strategic planning goals was to replace Fire Station 2. In discussing this project with the city manager, deputy city manager, mayor, and city council, we presented a case for the replacement of Station 2 which was unanimously supported. The caveat of course was: “How are we going to pay for it?” Since this project was explored before, we looked at what was already on paper rather than reinvent the wheel—this included plugging in the budget numbers for acquisition of the property; infrastructure improvements such as water, sewer, and gas service; hiring an architect; design plans, construction; furnishings; and landscaping. The existing budget figure was based on a single-story “satellite station” that featured two, possibly three, apparatus bays; dayroom; fitness room; kitchen; a bunkroom with separate male-female bunk spaces; male and female bathrooms/locker rooms; a lieutenant’s office; and miscellaneous storerooms. The previous budget number was identified as $2.2 million on the “low side” to $2.5 million on the “high side.” Those budget numbers included construction costs of $1 to $1.9 million, a 10% contingency, and design and testing fees of $187,184 and $187,184 for other related costs.

Armed with this information as a starting point we began to revise the numbers and the plans, which included scouting the south end of town for the site of the new fire station. Of course, we looked at all the typical factors for deciding on a location such as response times, travel distances, and impacts on existing homes and businesses. While everyone likes the fire department, they usually are not thrilled to find out the new fire station will be their new neighbor.

While out on a “scouting mission” with City Manager Steve Miller and Deputy City Manager Kelsey Lock, we were standing on the site of an empty lot that we thought would be an excellent location when one of those “Ah-Ha” moments took place. Across the street stood a commercial structure that I thought, with a little work, could be repurposed into a working fire station. While these thoughts were running through my head, Miller nudged me and said, “Too bad you couldn’t buy that building across the street and turn that into a fire station.” My reply was, “We are on the same page, I was thinking the same thing.” With a short phone call, Miller contacted the realtor and we were in the building walking the property and exchanging ideas.

The structure was built in 2007, featured one overhead door, concrete floors, a large warehouse type area with a built-in steel mezzanine for storage, and ample space. The office area was separated by a fire wall and had more than enough space to be converted into a living area for the firefighters. We drew up our conceptual plans ,and today the station is about 98% of what we envisioned that day.

The building was listed for sale at $475,000. We discovered that the property had been on the market for a year, and the owners were located out of state. We made an offer of $400,000, which was accepted. The old Station 2 was located next door to a car dealership that was already leasing a portion of the property for the dealership use. The dealership wound up purchasing the old station for $200,000 and has converted the station into a quick lube/customer delivery facility.

The architect costs were minimal since we utilized city engineering staff, and we were fortunate that our assistant chief, Matt Kulesza, was a construction superintendent in a previous life. The firefighters were given a walkthrough of the proposed building and solicited for input on the design of the new station.

Their design was very close to the design already put on paper, and only a few rooms were “flipped” in the final project. In addition, to gain an extra bunk space, the general office was downsized to make the lieutenant’s office larger and allowed us to incorporate a bunk room complete with lockers behind the office wall.

The station features two unisex bathroom/shower room facilities in the living quarters and a third unisex bathroom on the apparatus floor. There are three individual bunkrooms with lockers. The fourth is located as part of the lieutenant’s office. The station offers a general office for the firefighters to work on projects or school-related projects and a common office area outside the exercise room. The exercise room is large and accommodates a variety of strength training and cardiovascular exercise equipment.

A full kitchen, dayroom, laundry room and janitor’s closet are included. The station also features a climate-controlled information technology room that has ample room for technicians to work and expand the IT system if needed. The warehouse area now accommodates the apparatus bay, building mechanicals, third bathroom, mezzanine storage, and “clean room” that houses the firefighter turnout gear. We were able to use the built-in steel mezzanine structure and enclosed the base to construct the clean room, which houses the firefighter turnout gear. The lone overhead door was enlarged, and two additional overhead doors were added. The station features three nondrive-through bays. While some may argue they would rather have three drive-through bays, I will take a new fire station vs. no station.

The station has a number of energy-saving features incorporated into the design and we were also able to reuse a majority of the Magna Grip Vehicle Exhaust Capture System from the old station in the new station. The new station is located one mile south of the old station and is located on a two lane street featuring traffic preemption that allows the firefighters to safely exit the station and enter the four lane roadway safely as compared with the previous location that was less than ideal. In addition, the new station allows immediate access to an overpass that bypasses a busy rail line and rail spur line thereby dramatically decreasing response times to the main business district and interstate highway system.

There are a substantial amount of positives to this station project. Obviously the cost savings were substantial over building from the ground up. The net purchase building price was $200,000. The construction costs including architect stamps was $725,000, making the project costs $925,000.00 and saving the city and taxpayers anywhere from $1.3 to $1.5 Million Dollars. This demonstrates to the citizens that the city and the fire department are creative and can produce innovative strategies to address issues facing the city. We were also able to take an existing structure that had been sitting abandoned and refurbish it to a building that complements the neighborhood and surrounding businesses. At the same time, we were able to sell the former Station 2 property to a local business owner who was able to refurbish the facility to complement his family business and the surrounding area  businesses.

BOB TUTKO is the chief of Effingham (IL) Fire Rescue.