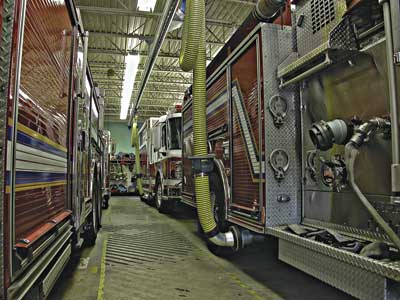 When a fire department acquires a new fire truck equipped with advanced diesel exhaust technologies, fire personnel should be aware that while the health risks associated with exhaust emissions are reduced, hazards still remain. The Plymovent team reviewed several studies in which researchers measured the emissions of new technology diesel engines (NTDE) including a diesel particulate filter (DPF), a selective catalytic reducer (SCR), and a diesel oxidation catalyst (DOC). The studies indicate that the occupational health hazards from the emissions have been lessened, but not eliminated, by NTDE. Here are three threats that NTDE exhaust still poses to firefighters.

Threat #1: The 10 percent or More of Pollutants Still Being Emitted: A 2015 study from the Health Effects Institute (HEI) concluded that new diesel engine technologies removes 90 percent of the dangerous particulate matter and toxic air pollutants from emissions. However, not all researchers agree with the “90 percent” finding. A 2016 Health Canada report stated that the technologies remove “more than 70 percent” of compounds from the exhaust. Whether the actual number is 10 percent or 30 percent, there is no acceptable limit of diesel exhaust in an indoor environment, as the exhaust is complex and contains both carbon particulates and 40 chemicals that are classified as “hazardous air pollutants” under the Clean Air Act.

Threat #2: The Increase in Ultrafine Particles: Diesel exhaust contains “ultrafine particles” (UP), which are considered the most dangerous of all types of PM because they are small enough to be moved through the cell barrier and into the bloodstream, where they can reach any organ in the body including the brain. Several studies have shown that “clean diesel” trucks can meet both mass and number standards but emit significant numbers of solid particles below 23 nm, or UP. One research team monitored a heavy-duty diesel truck with a DPF and identified the release of ultrafine particles of 8 to 10 nm from the DPF.

Threat #3: Emissions While Idling: Another factor for firefighters to consider is how NTDE functions when the truck is idling during an apparatus check. In particular when the exhaust temperature is less than 570°F (300°C), the DOC does not operate fully. An idling truck may release emissions that contain unburned fuel and products of incomplete combustion. SCR output has also raised concerns when the engine is first started, because SCR injects ammonia into the exhaust gas stream and reacts with NO and NO2 to form nitrogen and water. Unfortunately, if too much ammonia is injected, then “ammonia slip” occurs, in which ammonia (NH3) is emitted. 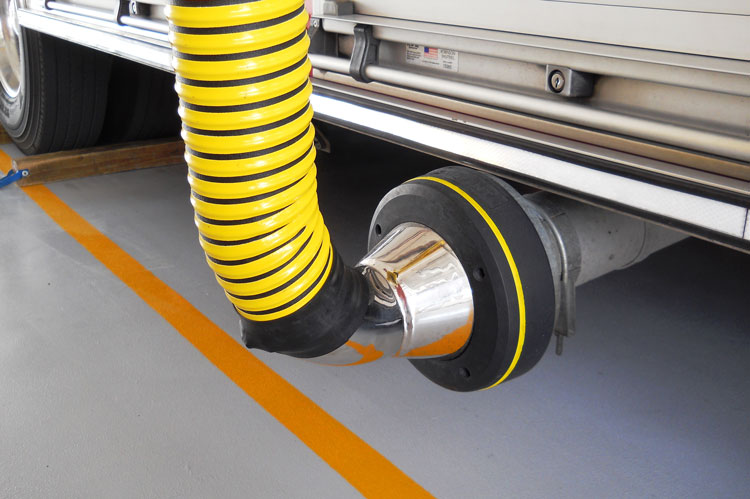 Localized Exhaust Removal the Best Solution
Because of these ongoing diesel exhaust threats, NIOSH officials visited and measured air quality in fire stations in 2016 and 2017 and recommended “local exhaust ventilation systems” for fire apparatus, such as those offered by Plymovent, even though several trucks had NTDE installed. This is why Jim Burneka from Firefighter Cancer Consultants, LLC. has stated that “the closed source hose capture system is generally the best system” for removing hazardous diesel exhaust from the fire station. Because these systems are attached to the apparatus, diesel exhaust is captured at the source, serving as an extension of a vehicle’s exhaust system tailpipe and sending harmful particulates and gases outdoors. A localized exhaust removal system also minimizes the amount of air that needs to be removed, helping to reduce total energy costs. Systems like those offered by Plymovent include fans with timers to continue capturing exhaust after the vehicle’s engine is turned off, further reducing the risk that any exhaust enters the station.