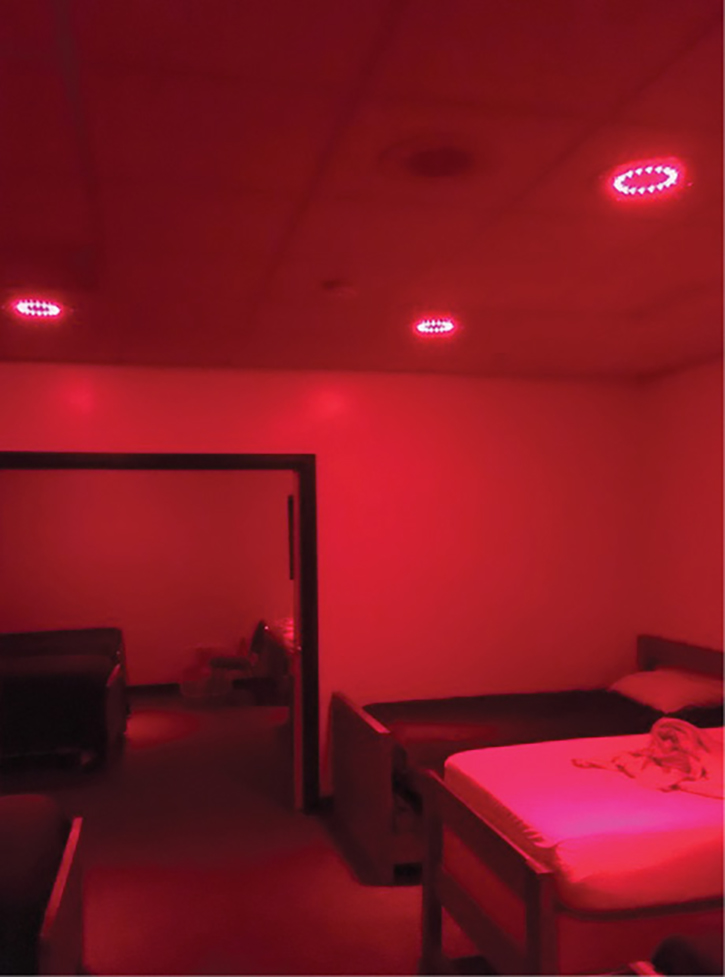 Studies have shown that interrupted sleep cycles or regularly disturbed sleep can affect the mental and physical effectiveness of the performance of tasks.

For firefighters, sleep deprivation might contribute to underperformance of various job functions or even safety issues. But, sleep researchers, station architects and designers, alerting and lighting equipment manufacturers, and fire departments are finding ways to mitigate firefighter sleep deprivation issues in their stations.

Mariana Figuerio, director of the Lighting Research Center at Rensselaer Polytechnic Institute in Troy, New York, says while she and her researchers haven’t worked with firefighters yet, they have a lot of sleep data from working with nurses on both day and night shifts in hospitals to try to help them stay alert without disrupting their circadian systems. A circadian rhythm is a natural, internal process that regulates the sleep-wake cycle and repeats roughly every 24 hours. “Our work is aimed at trying to increase the alertness of those persons who have to stay awake during the nighttime, like firefighters who work 24-hour shifts and may take naps but have to wake up and be fully alert,” Figuerio says.

Figuerio says her team built a light mask that delivers red light through a subject’s closed eyelids during a sleep period. “When using the red light mask, the subjects woke up faster, were more alert and less sleepy,” she points out, “and they performed better on reaction time tests than those who didn’t use the mask.” She adds that her researchers collected electroencephalogram (EEG) information from test subjects to determine which part of the light spectrum wavelengths are most effective. “We’ve found that red light has a very long wavelength, which does not suppress melatonin, a hormone that regulates the body’s sleep-wake cycle, whereas blue light, at the other end of the color spectrum, has a very short wavelength, which does suppress melatonin,” Figuerio says.

She notes that the Lighting Research Center’s nurse study was funded by the National Institute for Occupational Safety and Health (NIOSH) and that the Center is currently writing a NIOSH study proposal to work with firefighters in departments that run 24- or 48-hour shifts. She encourages fire departments interested in taking part in the study to contact the Center.

Patricia Haynes, PhD, associate professor at the University of Arizona’s Health Promotion Sciences Department, says her department ran a sleep recovery study of 60 Tucson (AZ) Fire Department firefighters to determine how well they recovered on their days off after 24-hour shifts. Tucson Fire runs a five-six schedule where firefighters are on for 24 hours then off for 24, which is repeated to a total of five shifts, and then are off for a break of six days. “The study was to determine how they were sleeping on those six days,” Haynes says. “We found that the more sleep the firefighters got, the higher the perception of less stress on them.”

Stephanie Conn, PhD, a psychologist at First Responder Psychology, says sleep deprivation “is one of the most common and critical issues I see that affects first responders. You need to get your sleep because there’s no processing trauma if you are not sleeping, which means you won’t have the energy to outrun depression and anxiety.” Conn estimates that 40 percent of first responders have a sleep disorder, insomnia, or sleep apnea and offers techniques that can help overcome the issue. “An easy step is to calm the monkey mind,” she says, “which is when your brain is jumping from thought to thought. Focus on something, like thinking of a four- or five-letter word that begins with an ‘s’ and think of other words beginning with that letter and see an image of each word in your mind. This cognitive shuffling simulates what the brain does when going into sleep or a dream state.”

Conn also suggests using an audible book that the brain can focus on, because the brain can tune it out and then become passive. “You want to move from an adrenalized, mobilized state, so use slow breathing to bring your system down,” she adds. “Hold your breath for four seconds, exhale, then do it again to try to activate your parasynthepathic nervous system into a rest state.”

4 Hallways and corridors leading to the apparatus bays also are illuminated by red lighting controlled by the Phoenix G2 system.

5 A firefighter responds from a dorm room that has USDD red alert lighting as well as a G2 room remote alerting monitor that shows details of the call.

Conn agrees that lighting matters in sleep quality. “When you have brighter light in your eyes, it tells the brain to stop production of melatonin,” she says, “but some colored lights, like red, promote melatonin production to allow sleepiness.” And, short naps can be helpful to combat sleep deprivation, Conn says. It’s better to get good sleep in the first place rather than to make up for sleep that’s lost,” she points out, “but, a firefighter’s safety might depend on getting some type of sleep, even if it’s a 20- to 30-minute nap.”

Darin Wallentine, Tucson Fire’s deputy chief, says during the study Tucson’s 22 fire stations did not have zone impacting, which the majority do now. “We use a US Digital Designs (USDD) system that zone dispatches to the specific companies needed and uses lighting that is conducive to waking, and instead of loud sounds and tones blaring, the audio is slow to build in volume, as are the lights,” Wallentine says. “Our firefighters are waking to red lights, as opposed to blue, and the hallways are lit in red too. In addition, scrolling video boards display details of the call being dispatched.”

John Gulotta, a Tucson Fire captain, notes that most of Tucson’s stations have individual dorm rooms, and those few with open bunk rooms have curtains and dividers and are slated to be remodeled or rebuilt. “As we implemented the new technology, the crews who experience it for the first time are astounded at how calming it is,” Gulotta points out. “The technology is pretty impressive.”

Erik Hanson, national sales manager for USDD, says his company’s Phoenix G2 station alerting system uses ramping lighting and ramping audio to alert firefighters of calls. “We were approached by Phoenix (AZ) Fire Department in the early 2000s to develop a station alerting system that helped protect the health and wellness of firefighters and other staff,” Hanson says, “which is why we developed the Phoenix G2 system. It uses LED lighting that is optimized to the red wavelength, which works well in low-light situations and does not shock a firefighter awake with a blinding white light.” He notes that the lights are installed in bunk rooms and dorms and also in critical egress areas like hallways, corridors, stairwells, and fire poles.

“Our audio is an intelligent, evolving voice that is based on real human sounds called phonemes,” Hanson says. “We licensed the technology that stitches phonemes together to make clear, articulate words that are in small data packets. The technology allows a customer to make changes to the voice at will, add emphasis or take it away, create custom warbles that can be used to alert individual fire or EMS personnel, and push the alerts onto mobile phones as well as on station monitors. Once the dispatch center enters information into our system, it can alert stations in one third of a second, which reduces response times.”

Courtney DeWinter, director of communications for Locution Systems, says medical research on the negative effects of sleep deprivation show it to be as harmful as chronic intermittent stress. Locution Systems makes the PrimeAlert® Fire Station Alerting System, she says, “a zoned alerting system that can precisely alert a responding unit by either lighting or audio or both, which is particularly important in multicompany stations.” She notes that the system can direct alerting information and lighting into individual dorm rooms; specific zone bunk areas or over general geographic areas in a station; as well as in stairways, corridors, and other firehouse areas to allow firefighters to navigate safely.

In dorm areas where a number of firefighters sleep in the same room, DeWinter notes that the PrimeAlert system can still zone lighting and audio to specific areas. “It can control lighting that funnels to the responders who have to go, and the audio has a focused speaker so the sound doesn’t fill the entire room,” she says. “Our ramped lighting uses red light to preserve night vision, starting out at a very low level of intensity that ramps up over several seconds to brighter intensity, bringing you into the light more gently, which partly mitigates sleep deprivation and stress and helps prevent spikes in blood pressure.”

Bob Mitchell, principal at Mitchell Associates Architects, says he recommends to clients that time-of-day color temperatures be built into the lighting for fire stations he designs. “Lighting, both natural and artificial, affects sleep and rest,” he notes. “Tunable lighting is important in fire stations because it reminds the body of where it’s going. Windows and skylights can provide daylighting in a station to help align the body’s circadian clock, and at night, lighting should come on in a room in red and slowly transition to warmer colors. That tunable lighting should also be subdued in hallways and stairwells, and stairs lighting should be at floor level so you don’t trip and yet don’t have over-bright light ruin your night vision.”

Keith Driscoll, project manager for Hughes Group Architects, says the trend toward individual and smaller numbers in bunk rooms instead of a common bunk room allows architects to spec alerting systems that control lighting separately so only the crew needed is alerted. “We’ve also seen a change in the lighting types used,” Driscoll says, with red light on pathways and corridors to the apparatus bays and other travel paths like stairways and fire poles. We designed Station 3 for Arlington County (VA) Fire Department with red egress lighting and have another station under design with red egress lighting in the apparatus bays as well.”

Ken Newell, principal at Stewart-Cooper-Newell Architects, says that research has shown that not only not getting enough sleep but also getting fragmented sleep of starting and stopping in two or three chunks of time can affect motor function, reaction times, behavior, and mood and can lead to a lack of energy, less critical thinking ability, and less vigilance and be a precursor to post traumatic stress disorder. “The configuration of the building is important, with about 70 percent of fire departments choosing individual bunk rooms with one bed and three lockers for their new or renovated stations,” Newell points out. “This gives privacy and gender separation but also lessens sleep deprivation because it’s quieter, and the firefighter isn’t hearing snoring or other noise from other firefighters who might be up and moving around. It also allows for zoned alerting through lighting and audio that is directed only to those individuals needed for the call.”

While many departments are using red lights at night to alert firefighters in their dorm rooms and in egress areas like hallways, stairs, and corridors, Newell notes that colors in a station also can be critical to firefighters’ well-being. “Studies show the colors of walls, floor finishes, and other areas can impact how firefighters are able to sleep,” he says. “They have found that grays have an impact on the circadian clock in our bodies to aid in getting to sleep. And, we recommend using blackout shades with integral frame channels along the edges to keep light out during the day.”