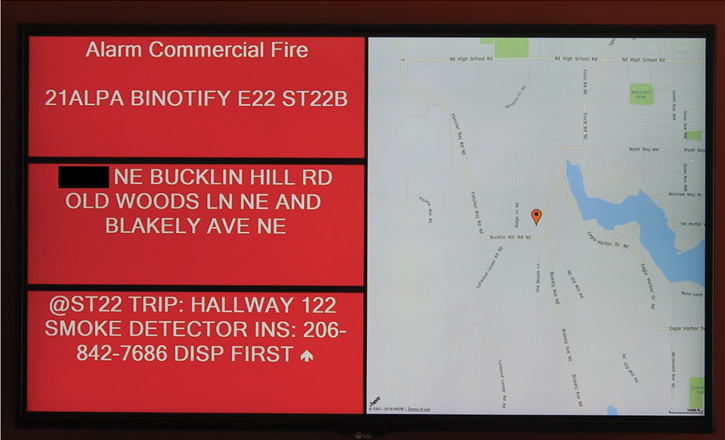 Technology is having an impact on firefighters in numerous ways, from apparatus to equipment to components and, more recently, in the fire stations in which they live, work, and train.

Brett Hanson, associate principal at Mackenzie, says his firm was engaged to design and build a replacement headquarters fire station and a secondary station and to remodel an existing third station for the Bainbridge Island (WA) Fire Department that would incorporate technology throughout the buildings. “The department wanted us to create consistency across the three stations,” Hanson points out, “and one of the major elements was a full alerting system through APS Firehouse Alerting that has monitors in various spaces in the stations.”

Hank Teran, chief of Bainbridge Island, says monitors are located in the watch room, day room, apparatus bays, offices, exercise room, and reception area that display information through the APS alerting system as well as other information such as weather and staffing. “The APS system uses data from fire dispatch and their own technology to provide us with information at our fingertips through the monitors no matter where we are in the station,” Teran says. “What we like about the system is that it’s not proprietary and uses off-the-shelf components that can easily be replaced if necessary.”

Teran notes, “When the system is not in a state of alarm, it shows us who’s on duty and where they are, displays video from a ferry camera—remember, we’re on an island—and gives us weather conditions. When an alert comes in, the monitors go red and then display the type of call, the address, and a GPS map of the route to the scene. The information also is conveyed via audio.”

The Bainbridge Island Fire Department is a combination department with 30 paid firefighters and 30 volunteers, Teran says. “The system incorporates a light dimming feature at night that is very helpful in preventing the night blindness you can get on waking for a call and walking into full bright lighting,” he says. “Night alerting is done with muted lights, and even the lighting in the apparatus bays is dimmed.”

Bainbridge Island’s headquarters Station 21 is two stories and 26,800 square feet with nine individual bunk rooms for firefighters, one bunk room for the captain, another for a lieutenant, and five double-deep drive-through apparatus bays plus two back-in bays. Hanson says that Mackenzie put in computer-controlled overhead radiant heating units in the apparatus bays that are tied into the station’s master system so that when the station gets a call, the supply of propane to the heaters is automatically shut off. Once the apparatus bay doors are closed, the propane is turned back on.

Teran notes that the station has a secured landing zone for a medivac helicopter that provides service to the entire island, with access controlled by key fobs in the apparatus and in the station. “We also installed full access to WiFi throughout the stations so that when our firefighters are working on special administrative assignments, they can independently work anywhere in the station,” he says. “The full-access WiFi also gives them the opportunity to work on personal assignments and outside education. Our focus for staffing is having the boots on the ground rather than sitting in administration.”

2 A Bainbridge Island monitor when not in alert, showing weather, door camera, staffing, and a ferry camera.

3 When Bainbridge Island Station 21 gets an alert, all the station monitors show a screen like this one, giving the type and location of the alarm, address, and GPS map to the location.

At the other end of the country on the East Coast, Stewart Cooper Newell (SCN) Architects designed stations for two North Carolina fire departments that include a number of technology-oriented systems. For the Kannapolis (NC) Fire Department, SCN installed cyber key systems for the department’s Station 2 and Station 3. “There is no power in the door, only a wireless device in the frame or lock,” says Jody Jackson, SCN’s project manager. “Access is programmed into the cyber key fob the firefighter carries, which can be set for various areas of the station and for different lengths of time.”

Kannapolis Stations 2 and 3 are each 12,500-square-foot one-story structures with eight individual bunk rooms, two double-deep drive-through apparatus bays, and a mezzanine level for mechanicals and storage. Ken Newell, SCN principal, says Kannapolis has stationwide monitors in all the living and working areas. “Every room has at least one data box and one information technology box to handle a monitor,” he points out. “And, their alerting system allows a single crew to be alerted or individual rooms to receive tones. At night, the lighting systems can go from red light to dimmed light to full light.”

Rick Barnhardt, administrative services chief for Kannapolis, says the stations also have special access control to all areas through a cyber key programmed from a desktop computer. “We can set any kind of timeframe or schedule with expiration dates if necessary,” Barnhardt observes. “The power source is a battery in the key, which energizes a solenoid in the lock cylinder.”

Barnhardt says that the stations’ alerting systems are activated on the monitors, which also act as bulletin boards. “The software is from Alpine Software, and it divides the monitor into four quadrants,” he says. “They show weather radar, call history, the current call, and upcoming events. When a call comes in, the call populates the type and location as well as hydrant locations.” Monitors are in the kitchen/day room, apparatus bays, exercise room, captain’s office, and as a screen saver on any desktop computer that’s not being actively used.

The Kannapolis master system has a VHF radio tied into an amplifier that goes across to a public address system and the software for the monitors, Barnhardt adds. “The system also has truck sensors in the bays, so it knows when a truck actually responded and returned to service. We also have an open WiFi system throughout the station for personnel to access as well as secured WiFi access. In addition, we can tap into teleconferencing technology through our county system and do daily teleconferencing among our five stations.” Kannapolis has 110 paid firefighters (including 16 part-time) and 10 administrative staff.

SCN also designed technology into a new station for the Burlington (NC) Fire Department, Newell says. “Burlington chose a lot of the same technology as Kannapolis,” he says, with the special access key fobs, a selective audio alerting tone system that can alert a full station or only a single crew, stationwide monitors and WiFi, and a distance learning audiovisual system in its training room. Burlington’s Station 6 is a one-story building of 14,500 square feet with three double-deep drive-through apparatus bays, nine sleeping rooms, offices, a training room, and a kitchen/day room.

Matt Lawrence, Burlington’s deputy chief, says the department has 109 employees, including 96 firefighters running out of six stations to service a population of 55,000 in 30 square miles of residential, commercial, and industrial structures. “We have special access control in Station 6 through key fobs, and each employee can access other stations as well,” Lawrence points out. “Our audio alerting tone system gets its information from the communications center and can be tailored for who is being dispatched and at what station. For training, each station has videoconferencing capability, so we can have a presenter at any station who can be accessed by firefighters at the other stations.”

Lawrence spent ten years at Burlington Fire Department before becoming deputy chief of Chapel Hill (NC) Fire Department for 10 years and then returning to Burlington. When he was at Chapel Hill, the department demolished a 1959-era fire station and built an 11,000-square-foot, two story fire station, two-story parking garage, and six-story office building through a public/private partnership. “The station serves as an IT fiber hub for the city and has key fob access and security, video cameras for security, a full station generator,” he says, “and a Page Track software system for the station’s video monitors to identify the type and location of a call and the locations of the trucks responding.”