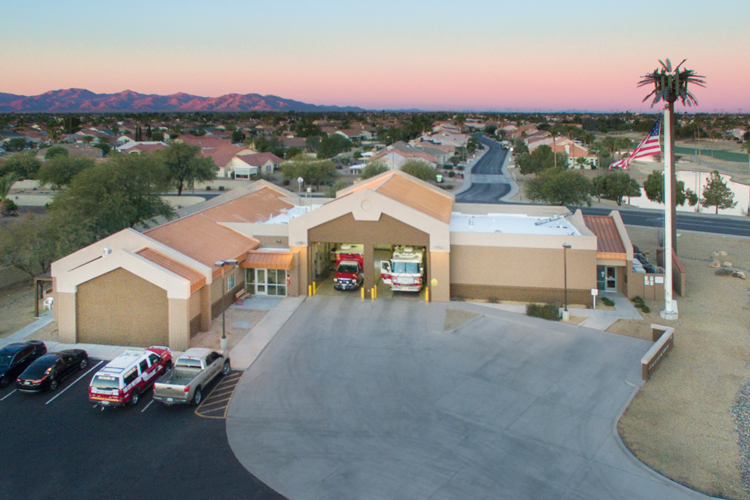 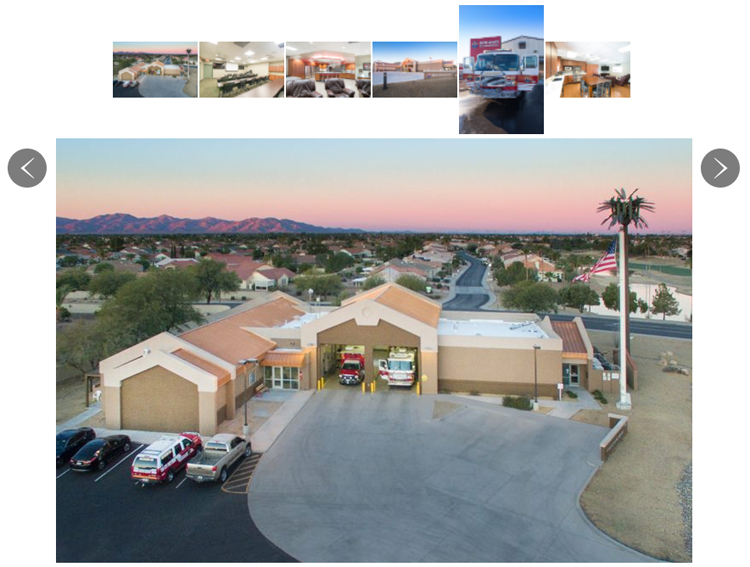 Two fire stations, one a new structure and the other a renovation, were undertaken by the Arizona Fire & Medical Authority, which at the time operated as North County Fire & Medical District located in the Phoenix, Arizona, metropolitan area. Renovation was needed on a station built to residential building standards in 1999, and a temporary station needed to be replaced.

After issuing requests for proposals (RFPs) to four architectural firms, the district performed its due diligence and chose Arrington Watkins Architects to design the projects.

Matt Gorman, principal in Arrington Watkins, says the renovation on Station 103 “was pretty straightforward because the district was willing to completely gut the building. When we looked at how the redesign would have to meet their needs, we knew we had to remove everything.”

Tim Van Scoter, Arizona Fire & Medical’s deputy chief, agrees. “We had to gut the building down to the walls and ceilings,” Van Scoter says. “The station had been built to 1999 residential standards, so surfaces were worn from lots of use, there was no functionality to the place, no individual bunk rooms or bathrooms, and the station was not American Disabilities Act (ADA) accessible. That’s why we gutted it and remodeled.”

Gorman says Arrington Watkins removed all the tile and carpet in the station and had the concrete floor ground to expose the aggregate then polished and sealed it. Fresh poured and polished concrete had to be laid down in a couple of areas, including the kitchen and the day room.

He points out that the challenge in the redesign was that the two double-deep, drive-through apparatus bays were in the center of the building. “There was a 30-foot long training room on one side of the building, which is the public side of the station where that space can be used as a community room,” Gorman says, “then the truck bays in the middle of the structure, and living areas and offices on the other side. We reconfigured the training room area and improved the space for use by group functions.”

Adjacent to the apparatus bays, Arrington Watkins added a new room for turnout gear, which had been stored in the bays and at an outside location. Gorman says they also added vestibules with double doors into the apparatus bays to isolate the bays from the living side of the station. Arrington Watkins also created eight individual bunk rooms and three new bathrooms—two individual unisex and ADA-accessible and one male bathroom with three showers.

Van Scoter says the renovated station has a new interior floorplan that is better suited to how the Authority operates, especially with the bunk rooms being similar to those it has in other stations.

Station 104 was built on property donated to the Authority by Arizona Public Service, the area’s electric utility; however, the site had some problems, according to Gorman. “There was no water or sewer to the property, and electric power was a couple of miles away,” he says. “We had to bring underground electric in, drill a water well, and install a septic system. The station is designed to support six firefighters, so we installed all low-flow fixtures in the station and were able to get Maricopa County to approve the installation of a residential sprinkler system that operates on domestic pressure and volume instead of a high-pressure and high-volume commercial system.”

Van Scoter says the Authority had a double-wide modular structure that it contracted with a modular manufacturing company to bring to its factory, refurbish it to the department’s specifications, and return the modular structure and install it on the Station 104 property. “There are five separate dorm rooms, two full bathrooms, a day room and kitchen, and offices for the captain and crew in the modular structure,” he notes.

Gorman says that Arrington Watkins then designed a larger metal building to house the apparatus, turnout gear, equipment storage, and laundry, along with a mezzanine that holds a weight training room. “When they develop the site further, as the area around it develops, the metal building is designed to become a workshop, but we put it together so the entire structure is a cohesive project.”