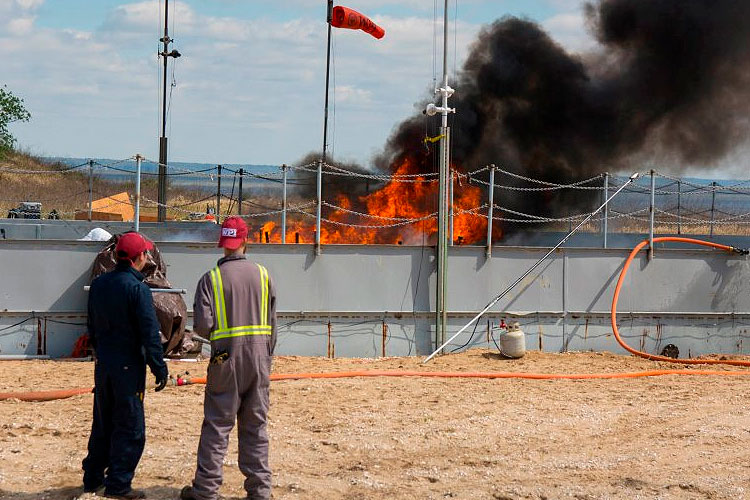 Recent tests were conducted of a novel technology that can greatly accelerate the combustion of crude oil floating on water. The tests demonstrated its potential to become an effective tool for minimizing the environmental impact of future oil spills. Called the Flame Refluxer, the technology, developed by fire protection engineering researchers at Worcester Polytechnic Institute (WPI) with funding from the Bureau of Safety and Environmental Enforcement (BSEE), could make it possible to burn off spilled oil quickly while producing relatively low levels of air pollutants.

The tests of the Flame Refluxer were conducted last week by WPI and BSEE at the United States Coast Guard’s Joint Maritime Test Facility on Little Sand Island, located in Mobile Bay. WPI is the first university to work on research at the facility since it reopened in 2015. The tests involved controlled burns of oil in a specially designed test tank on the island.

“In-situ burning has been used with great success, and it is our goal to support research that makes a good method even better,” said Karen Stone, oil spill response engineer at BSEE. “This research, and the results of this week’s tests, are particularly exciting. We saw hotter fires increase the amount of oil that was consumed, what appears to be cleaner emissions, and a significant reduction in burn residue after the burn. Initially we were hopeful that the technology could capture any remaining residue after the burn, but the fires burned so efficiently there was very little to collect.”