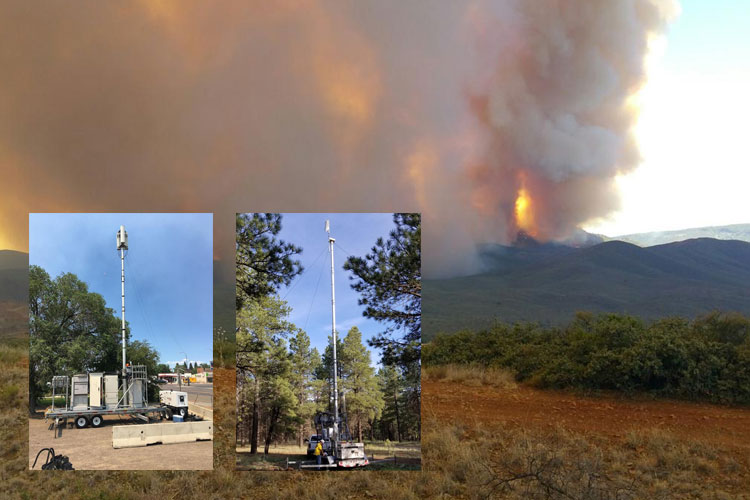 Above inset left: Cell on wheels in Utah. Photos via Verizon.

The company is providing two satellite communications solutions to provide 4G LTE service. A Satellite Pico cell on a Trailer (SPOT) includes a 30-foot antenna mast with the satellite dish on top of the trailer. A portable mini-satellite dish with a 4G LTE eFemto cell, is also being used for additional wireless service.

In Utah at Brian’s Head Fire, Verizon deployed a Cell on Wheels (COW) to the Brian’s Head Fire command center and base camp near Panguitch. The COW is a mobile cell site with multiple voice and data channels capable of processing thousands of calls and data transmissions simultaneously. The COW provides additional capacity for emergency crews accessing the Internet, sending text and video messages and making phone calls during disaster response efforts. The base camp needed critical communications services to support over 1,000 firefighting personnel.

In Arizona, with sustained heat of over 120 degrees igniting and expanding wildfires, the flames have impacted tens of thousands of acres of land. To assist the first responders and residents of those areas, Verizon deployed multiple network repeaters, which pick up a network signal, amplify it, and point it to an area with weaker or no signal.