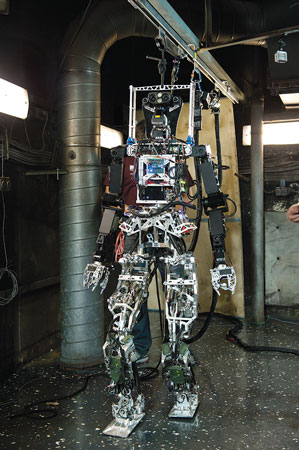 The United States Navy’s Office of Naval Research (ONR) Biorobotics Program, working in cooperation with engineering students and faculty at Virginia Tech University and the University of Pennsylvania, has developed an adult-sized, humanoid robot that carries a hose to fight live fires aboard U.S. Navy ships.

The Shipboard Autonomous Firefighting Robot (SAFFiR) is constructed from aluminum; stands five feet, 10 inches tall; weighs 170 pounds; and can send a one-inch blast of water at flames without stopping, faltering, or falling.

SAFFiR uses three types of sensors to navigate the spaces of a ship and locate the source of a fire, says Tom McKenna, PhD, program officer for the ONR Biorobotics Program. “SAFFiR uses a digital camera and a thermal imaging unit to see through the smoke and to detect heat and a scanning radar to allow for accurate mapping,” McKenna says. “The robot has 33-degree freedom of movement; it can walk, bend its legs, swivel its head, hold a hose, and operate a hose with its hands.”

In 2014, ONR put SAFFiR through a demonstration test aboard the USS Shadwell, a U.S. Navy experimental facility that has a fire control laboratory where suppression technologies can be demonstrated on live fires. During the demonstration, SAFFiR carried a one-inch hoseline and nozzle to suppress a fire using a concentration of water and foam. McKenna points out that SAFFiR has not been fire-hardened yet. “The robot was standing at the door of the compartment when it was suppressing the fire on the USS Shadwell,” he says. “But, all the personal protection equipment that human firefighters use to fight fires can be applied to the robot too.”

Dennis Hong, PhD, a professor at UCLA and founder of its Robotics & Mechanisms Laboratory (RoMeLa), helped develop SAFFiR when he was a professor at Virginia Tech. Hong notes that the shipboard environment is designed by humans for humans. “Hallways are very narrow, there are sharp 90-degree turns, ladders and stairways are impediments-all of which are an impossible environment for wheels or tank treads,” Hong says. “So, we designed a humanoid robot that could go everywhere on a ship that a human could.”

The biggest challenge Hong and his team faced was to keep the robot on two feet. “It’s extremely difficult to get robots walking on two feet,” Hong says. “The rolling of a ship makes it even more problematic. So, it was a huge challenge to make the robot walk on two feet in a moving ship and still negotiate obstacles.”

Brian Y. Lattimer, PhD, vice president of research and development for Jensen Hughes and a mechanical engineering affiliate professor and principal investigator on the ONR humanoid robot program at Virginia Tech, says that since the test on the USS Shadwell, Virginia Tech has developed a new version of the humanoid robot designed to handle additional tasks aboard ship. It also renamed the project Shipboard Evaluation Android with Dynamic Operator Guidance (SEADOG). “The SEADOG program focus is three-fold,” Lattimer says. “First is to have the robot move more effectively around the ship; second, to be able to assist sailors with maintenance and watch-related tasks; and third, to handle fire damage control and incident task assistance.”

Lattimer notes that much of the technology Virginia Tech is developing for the ONR robot is platform-independent. “We are developing it in a humanoid form because the robot has to move in a cluttered environment with a lot of obstacles that make it difficult for a wheeled or tracked vehicle to move around,” he says. One of the improvements made on the SEADOG version revolves around the robot’s knees. “We had to double the knee torque on the robot so it could go up stairs and ladders onboard a ship and more effectively climb over knee knockers (the sills of hatchways),” Lattimer points out. “The increased torque also allows the robot to walk faster.”

ONR requested a longer battery life for SEADOG, Lattimer adds. “They wanted up to a three-hour battery life,” he says. “That also drove up the knee torque requirement because the weight in the batteries in the upper frame needed stronger lower support.” Lattimer and his researchers also doubled the number of computers onboard the robot from two to four and changed the types of arms SEADOG uses. “We now use HDT Global-designed prosthetic arms, which are very light in weight,” he says. “They can operate safely around people because they have an impedance control mode. That means that if the robot is moving its arm and it comes in contact with something, it will put a certain amount of force on the object but not exceed a certain programmed limit.”

The Virginia Tech researchers also have made significant progress on SEADOG’s ability to operate autonomously in a fire suppression task. “The demonstration unit on the USS Shadwell was guided by an operator, who gave the robot certain motions to move through based on what the operator was seeing through a video camera,” Lattimer says. “Since then, we’ve developed the ability for the robot to automatically recognize the fire, determine its distance, know that it’s holding the hose and nozzle, and then put water on the fire using the standard one-inch hose reel onboard the ship for interior work.”

Lattimer adds that the Navy has investigated knocking down large fires on the interior of ships using fire suppression grenades and that he thinks the humanoid robot will be able to handle the grenades as well as operate other types of equipment if needed. “We also are looking at a foam backpack for the robot,” he notes. “Our goal is for the robot to be able to manipulate objects that people typically do during damage control operations.”

McKenna points out that while SEADOG is still a research project, it has to meet certain benchmarks to make it a viable technology for the Navy. “We have to meet technical readiness levels,” he says. “We will continue to make the robot more robust in locomotion to take into account the rocking of a ship and give it the ability to use hand holds. We also will pursue a better human-robot interface and focus a bit more on better manipulators.”

Lattimer says the program’s goal is that 2½ years from now, the robot will be able to effectively move around a ship, balance and brace itself when in a significant seaway, and use its hands more in locomotion such as going up ladders and opening and closing doors and hatches. “The robot has a whole body controller that allows it to change the position of its joints to maintain its center of gravity and not fall over,” he says. “We also have integrated the robot’s onboard infrared vision systems with its mapping system, allowing the robot to know exactly where it is in the ship.”

Lattimer sees more potential robotic use for the Navy and other fire agencies. “I can see where a wheeled or tracked robot might be advantageous to fight a fire in an outdoor environment,” he says, “and where an unmanned aerial vehicle (UAV) might drop a small amount of fire retardant from the air.”