By RAUL A. ANGULO

Tools, equipment, and technology advancements to help keep firefighters situationally oriented on the fireground were a prevalent theme at FDIC International 2018 in the exhibit hall.

Firefighters become lost and disoriented enough times that numerous inventors—many of them active firefighters—are developing ideas to address this problem and make the fireground safer for firefighters. Though new technology advancements may seem complicated, the thought process behind the solutions remains simple: How do we keep firefighters from getting lost, separated, or disoriented?

According to Don Abbott’s Project Mayday, a firefighter becoming lost or disoriented is one of the top three reasons to transmit a Mayday. In the period from January 2006 to December 2015, 115 firefighters in the United States lost their lives from being caught, trapped, lost, or disoriented within burning buildings. Firefighters becoming disoriented is not unique to America; it’s also an international problem. The International Forum to Advance First Responder Innovation (January 2017), comprised of the European Commission and 13 countries including the United States, identified what it called Capability Gap 1: The ability to know the location of responders and their proximity to risks and hazards in real time. Much like the intent of our 16 Life Safety Initiatives, the Response Technology Objective (RTO) was to develop an indoor (above and below ground) responder geolocation system.

The Pathfinder Search and Rescue Way-Finder System, patented by Martin Patrick Trainor, assistant chief officer with the Cavan County Fire Service just outside Dublin, Ireland, and Paddy O’Boyle, director of business development at Dublin City University, addresses this objective. Working with a team of professors at Dublin City University, Trainor and O’Boyle anticipate their system will go into production in early 2019.

The system is a sort of virtual electronic “search rope” that uses a “breadcrumb” concept to assist firefighters in keeping oriented during interior firefighting and search operations where visibility may be limited or near zero because of heavy smoke conditions. It also helps prevent firefighters from becoming lost, disoriented, or separated from their crews when they exit the building under the same conditions. The system also allows a rapid intervention team (RIT) to locate a down firefighter much more quickly—a huge advancement in rescue technology.

The unit, about the size of a small smoke detector, is called a “puck.” It uses smart technology to track the movement of firefighters within a building. Unlike global positioning satellite technology, which cannot penetrate inside buildings, this smart technology can pierce through buildings and basements and isn’t affected by heights, so it can be used in high-rise firefighting operations. The puck uses a special adhesive that sticks to just about anything in a fire environment (photo 1). As firefighters enter the building for fire attack or search and rescue, they follow their standard search patterns, but instead of using a search rope to tie off at specific intervals—which is time-consuming because tying knots with gloves on in a dark, smoky environment slows down the search team (photo 2)—they slap a puck onto a wall or an object and keep going. As the search team advances farther into the building, they can place another unit at any interval they deem strategic. Unlike a search rope, which has a specific length, the search team is only limited by the number of units they can carry into the structure—so members can cover greater distances. Each unit acts like a radio beacon and transmitter that effectively leaves a “breadcrumb” trail for firefighters to follow on the way out (photo 3). 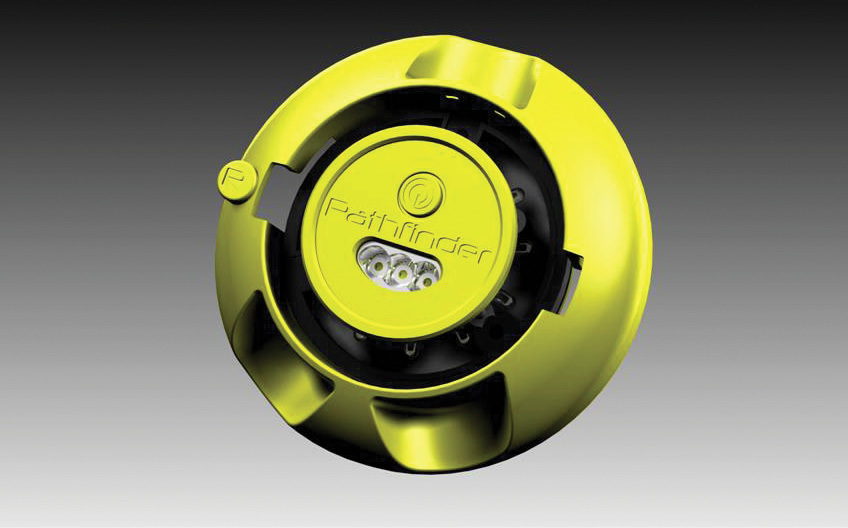 1 The Pathfinder Search and Rescue Way-Finder puck has audible and bright illuminated cues to help prevent firefighters from becoming lost or disoriented. It also helps a RIT locate a down firefighter. (Photos courtesy of Martin Trainor unless otherwise noted.) 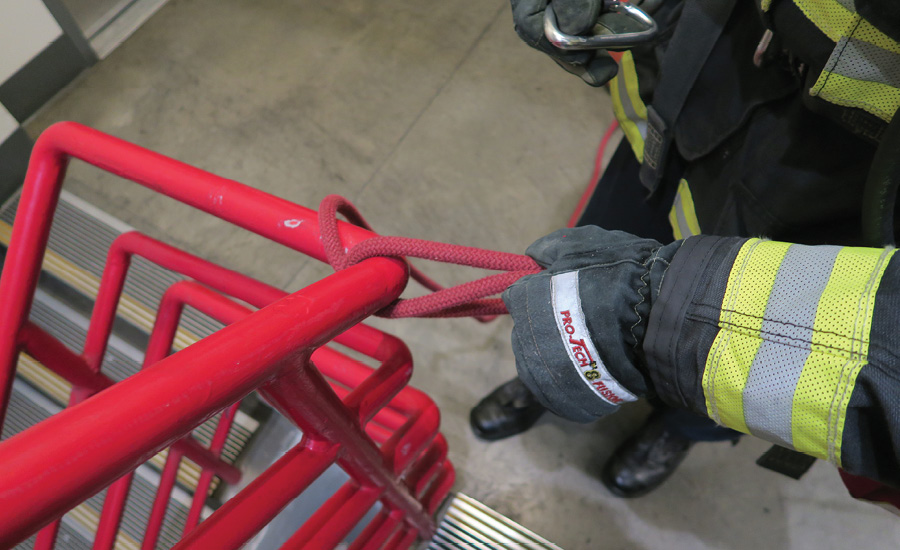 2 Tying off a search rope while wearing firefighting gloves can be difficult, especially in a dark, smoky environment, and can slow down the search team. (Photo by author.)

A propriety tracking sensor, which is about the size of a quarter, is attached inside each firefighter’s helmet. This identifies and tracks the movement of each individual firefighter within the structure. The sensor communicates with the puck and alerts firefighters with an audible alarm and a bright flashing illuminated visual cue to assist in identifying the exit path out of the building. Specific voice messages are incorporated into the unit. Currently there are four: landmark, door, searched, and hazard. The development team is looking into having the hazard messages customized to local protocol and available in different languages.

The device transmits real-time signals to a screen monitor at the command post outside of the building. This allows the incident commander (IC) to track the movement and progress of the firefighting crews inside the structure. My first reaction was to complain about having another computer screen to monitor at the command post while trying to run a fire. No one is saying you have to affix your eyes to the monitor; it’s there to check on the progress of interior teams, and when you have a Mayday or a missing firefighter, you’ll want every resource available at your disposal.

Photo 3 illustrates the breadcrumb concept to help you visualize how the units would be placed throughout a structure during a search. The information transmitted to the IC monitor only appears in a straight-line graph—not a building floor plan. In photo 4, Route A indicates a left-hand search and Route B indicates a right-hand search. However, these graphs can be a basement and Floor 1, Floor 1 and Floor 2, and even a high-rise Floor 33 and Floor 34—whatever the incident. As the firefighters work their way into the building and activate the affixed unit, a new dot will appear on the graph starting with #1 . The activation is accomplished by pressing the power button and tapping the puck. There are four tap positions that give a verbal announcement and generate an icon on the IC monitor so there is no need to memorize the positions. 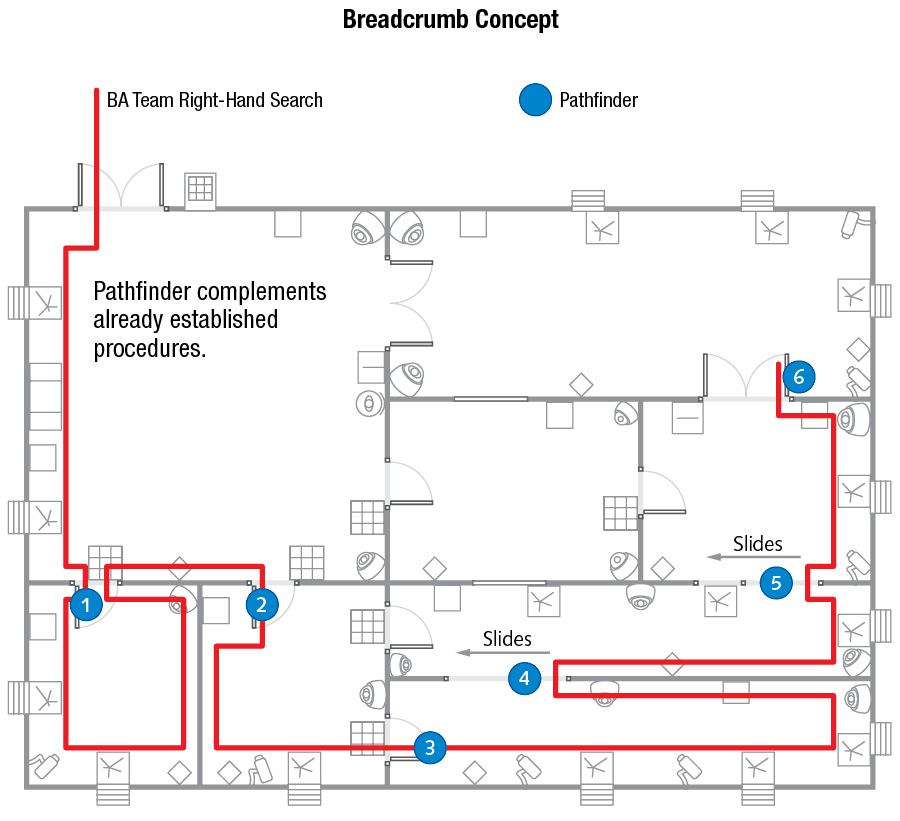 3 The Pathfinder uses a “breadcrumb” concept to assist firefighters find their way out of a structure without becoming lost or disoriented. This floor plan illustrates how the Pathfinder pucks would be applied in a search and rescue operation.

For example, tapping the puck once will announce “landmark” and generates a drop-pin icon (similar to Google maps) on the graph. A landmark is used like a marker knot on a search rope. Tapping it twice announces “door” and puts a small shaded rectangle on the monitor, which represent a door to a room that is about to be searched. Tapping the puck three times will announce “searched” and changes the numbered dot to green, indicating the room was searched. The door icon remains in place. The fourth tap announces “hazard” and places an exclamation point inside a red triangle icon next to the numbered puck. The dot turns red to indicate a hazard exists at that puck. All pucks activations are time-stamped.

Now we can read and understand the graph on the IC monitor. The activity on Route A indicates six pucks were placed. There’s a door at #1 that has been searched; #2 is a landmark; and #3 has been searched. There’s a door at #4, a landmark at #5, and another door at #6. Rooms 4 and 6 still need to be searched. Two firefighters are at puck 3 advancing through the structure. Three firefighters are at puck 4, and they’re heading out of the building; perhaps they are low on air.

On Route B, five pucks have been placed. Rooms #1 and #2 have been searched. There is a hazard at #3. This hazard would have to be communicated by radio to the IC and announced to all firefighters on the fireground; perhaps there is a hole in the floor. Room #4 has been searched, and the three firefighters placed a landmark at #5. They are still advancing deeper into the building and have been inside the structure for more than 12 minutes. Perhaps this would be a good time to have the crew check their air supply and suggest it’s time to make their way out.

Keeping with this example, let’s say those firefighters had to make a rapid exit to safety. All three cleared the 5th puck and the 4th puck. Suddenly, something happens around the hazard area of puck #3. The firefighter with the initials PO (Paddy O’Boyle) becomes lost and separated from the crew. The rest of the crew make it to puck #3, and the IC monitor shows two triangles at #3. However, one triangle with the initials PO is still showing at puck #4. Though the system doesn’t track the exact location of the firefighter, it will record the last checkpoint cleared by the missing firefighter. In this case, the IC knows O’Boyle is lost between pucks #3 and #4, and the RIT could start searching for him at puck #3. This saves a considerable amount of valuable time.

This is not a stand-alone system or a substitute for radio progress reports. All Mayday radio protocols would remain in effect. It’s simply another tool for the IC to gain a more complete picture of what’s happening with crews inside the fire building and enhance firefighter accountability during the emergency. 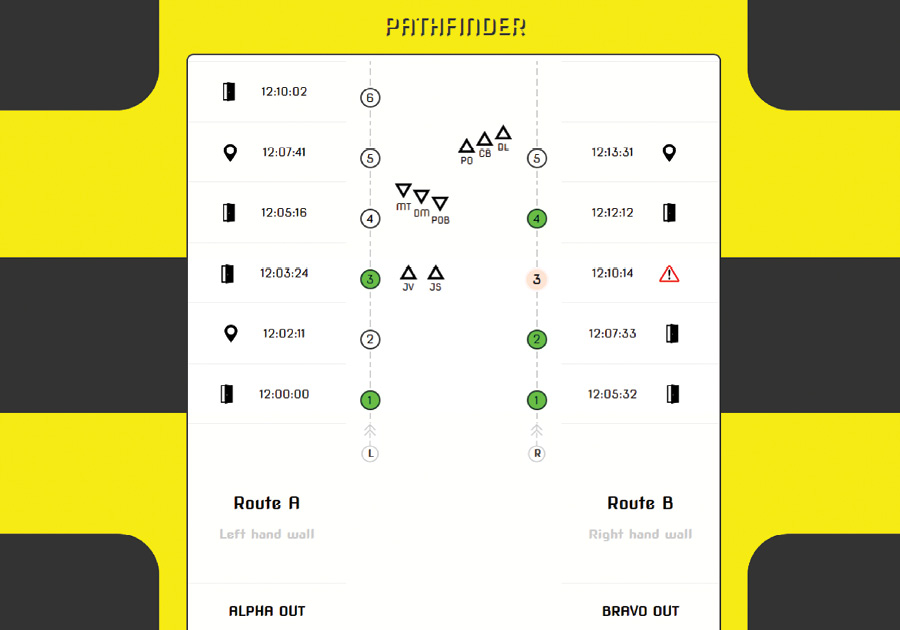 4 This is the straight-line graph that appears on the Pathfinder monitor at the command post.

Here’s another example of how the Pathfinder system can work during a search. If a search team advances into a structure and only places three pucks before rotating out, the second team can quickly advance to the third puck and continue the search.

The puck also serves as a thermocouple, which records and transmits the interior temperature in the surrounding area of that specific unit back to the IC. The development team is considering embedding the smart technology into search ropes so they would have the ability to transmit the movement of firefighters along a lead line back to the IC monitor.

I don’t think this system would be used for regular single-family residential or apartment fires, but I can see the application for large-area search, large labyrinth basements, and building collapses from earthquakes or terrorist explosions. I believe urban search and rescue teams would find this system especially useful.

The Pathfinder doesn’t solve every problem in keeping firefighters oriented in an immediately dangerous to life or health environment, but this technology has made substantial strides in doing so. The development team is seeking feedback and input from the international firefighting community to assist in the completion of this product as well as trial partners to test the prototypes. For more information, contact Trainor at martin.trainor5@mail.dcu.ie.

Remember, any invention is simply a tool to help us stay safe. It doesn’t replace the need to maintain individual situational awareness while operating in zero or limited-visibility environments.

RAUL A. ANGULO is a captain (ret.) of Seattle (WA) Fire Department Ladder Co. 6 with more than 37 years of service. He is an international author and instructor and has been teaching at FDIC International since 1996. He is a member of the Fire Apparatus & Emergency Equipment Editorial Advisory Board.