Rekindle vs. Due Diligence

I read an article recently where a fire department is facing a $1.9-million lawsuit … OUCH! How does that happen in today’s technology-driven society that has equipped the fire service with the most advanced tools for its firefighters?

In this column, I’m going to discuss rekindle and due diligence and what steps the fire department could have taken to prevent this lawsuit from happening.

Let me summarize the details of the circumstances that occurred to elicit this lawsuit: A structure fire had occurred several streets over from the plaintiff’s residence, at which time some embers had ignited on the roof of the resident’s house at 1:40 a.m. The fire department had responded and extinguished the fire on the roof and with minimal damage the family could reenter and stay in their home. At 7:30 a.m., the homeowners woke to the roof being on fire and once again the fire department responded and extinguished the roof fire, but this time a more significant amount of damage occurred, making the home uninhabitable. At 7:15 p.m., the fire department was called for a third fire that had ignited from the same roof of the plaintiff’s home, causing the home to sustain even further damage.

In the court documents, the plaintiff alleged that the defendants:

Now, what could the fire department have done to prevent this from happening by using due diligence? Firefighters could have used their thermal imaging camera (TIC). When the fire department responded the first time at 1:40 a.m., members should have used the TIC to conduct a 360° search around the structure based on information that the embers had ignited the roof from several streets away. The firefighters should have asked what else might have been burning that was not detected by the naked eye. After extinguishment, they should have used the TIC during the overhaul process both outside on the roof and inside the attic area to ensure the fire was completely out. 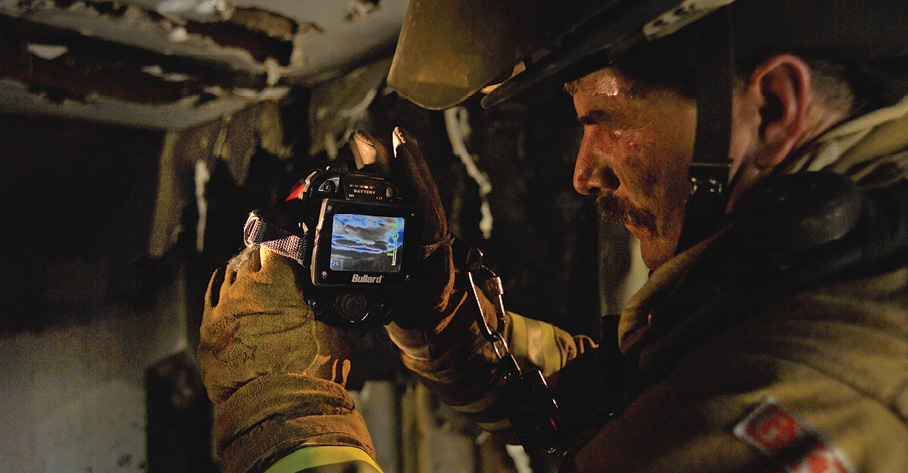 1 Always perform overhaul before leaving an incident, because you want to be certain to avoid rekindling. (Photo courtesy of Bullard.)

Further due diligence could have been done if the TIC had video and/or picture recording capabilities, letting the firefighters take a final walk-through inside and outside the structure before departing the scene and returning to the station. If doubt arose, the recorded information could have been reviewed by the station officer and a determination made to return to the structure for additional observation. Using the TIC both inside and outside the structure would have alerted firefighters to the possibility of rekindling occurring. Having to return a second and third time prompted the homeowner to initiate legal action against the fire department.

How does this happen in this day and age with the technology that is available to the fire service? Since this is an active court case, I cannot speculate nor comment further other than to say that all TIC manufacturers have digital video recording (DVR) capabilities for their respective TICs. If you have a TIC that does not record, ask your manufacturer to upgrade it to include recording capabilities. If you are looking to purchase TICs, look at DVR options. If you are looking at purchasing multiple TICs, not all of them need to have DVR capabilities, but make sure you get some that do. Since the technology is available, why not use it?

Now, let’s rewrite this scenario: When the fire department responded, the firefighters quickly grabbed the TIC to scan the structure and knocked down the fire. Once they knocked down the fire, they performed overhaul using the TIC and declared the fire out. Before clearing the scene, firefighters performed an outside and inside walk-through using the TIC to record everything and saved the video in a secure location. Completing these steps helped eliminate the need for the crew to return for a second time.

The word rekindle is a dreaded word all firefighters hate. This scenario takes the possibility of a rekindling out of the equation.

Our crew now knows that they performed their due diligence and the fire was completely out before they left the scene. Thanks to advances in technology, the homeowner suffered minimal financial damages because the crew used the TIC and avoided a return to the scene. In this case, the use of due diligence saved the fire department from litigation by the homeowner and insurance company.

So, is it rekindle or due diligence in your fire department? You decide. I just hope I don’t read about it.