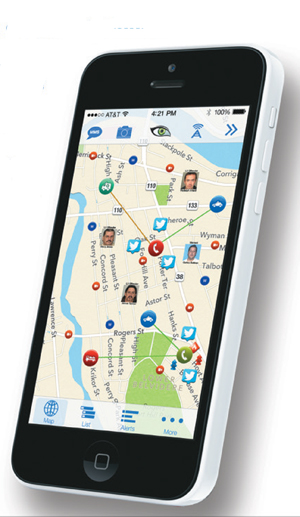 PublicEye does two things. First, it redefines and expands the number of people involved with public safety. Second, it dramatically changes how they collaborate, communicate, interact and perform their tasks, or how they keep abreast of information that is crucial to doing their job.

PublicEye is a mobile app available on iOS, Android, and Windows 8/RT. View a short overview video and sign up for a free Webinar at http://www.publiceyes.com/watch-video.aspx.

When you say public safety, most people think of police, fire and EMS. PublicEye expands this notion to governors & mayors and their staff, hospitals, schools, banks and other institutions as well as the public.

A governor or mayor can use PublicEye’s sophisticated notification system to alert them of important incidents such as a school lock down or natural disaster. They may then tune into its secure, nonpublic communication capabilities (video surveillance/streaming, digital radio, group MMS, real-time geographical incident maps, etc.) to monitor the situation on their smartphones.

Banks, schools, airports and other institutions can integrate their surveillance systems with PublicEye. First responders at the scene, staff at headquarters, or even their counterparts in adjoining jurisdictions for mutual aid purposes can view these cameras. PublicEye is a tool for hospitals too. They can use the video streaming and digital radio to communicate with field personnel and ambulances for triage and other purposes.

Last but not least, PublicEye leverages the general public to aid in public safety in a way that has never been done before. The public can tweet images surrounding a fire, natural disaster, accident, child abduction, etc. Police and firefighters can view these images surrounding the incident on their mobile devices to plan their action. PublicEye seamlessly connects, and visually displays, the tweets and other social media feeds, 911 calls and the location associated with an incident.

PublicEye uses wireless, mobile, video and even robotic technologies, and a touch interface to do things never possible until now. Imagine throwing an indestructible robot into a burning building and using its camera to locate a survivor and providing specific audio instructions (“follow me to safety”). Or, wirelessly tracking the location of every firefighter during a forest fire. Or, an officer sending a BOLO with the photo of a perpetrator and all other officers immediately seeing that photo on a map. Or, a doctor at the hospital diagnosing an accident victim from a live video stream.