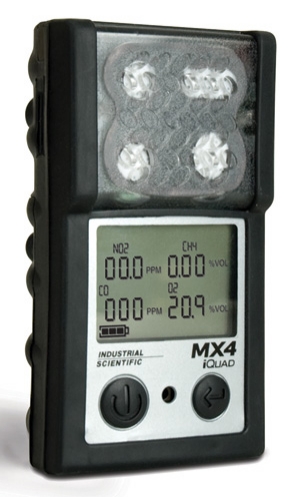 Industrial Scientific, a leader in gas detection as a service, has introduced the MX4 iQuad, which is able to detect from one to four gases and is the latest addition to the company’s line of iNet-ready gas detectors.

iNet, an alternative to buying and maintaining gas detectors, is a software-based service that increases safety by providing visibility into gas detector alarms, exposure and usage. It keeps gas detectors working without costly and time-consuming maintenance. Instead of buying gas detectors, customers subscribe to iNet and receive gas detection as a service.

Subscribers avoid common problems of owning gas detectors, according to the company, while being protected by the MX4’s reliable and user-friendly features.

The MX4 is small, rugged and simple to use, the company said. A rubber overmold covers its polycarbonate housing to protect the MX4 from high-impact bumps and drops. The housing has also been third-party
tested and certified IP66 and IP67, an ingress protection rating that indicates the MX4 is dust-tight and resistant to both water jets and submersion.

The MX4 uses a combination of three alarms – ultra-bright LEDs, a 95-db audible alarm and a powerful vibrating alarm – to warn users of hazardous gas levels.

For more information, go to www.indsci.com.

GA Firefighter Wins Second Place for the Concept and Design of...