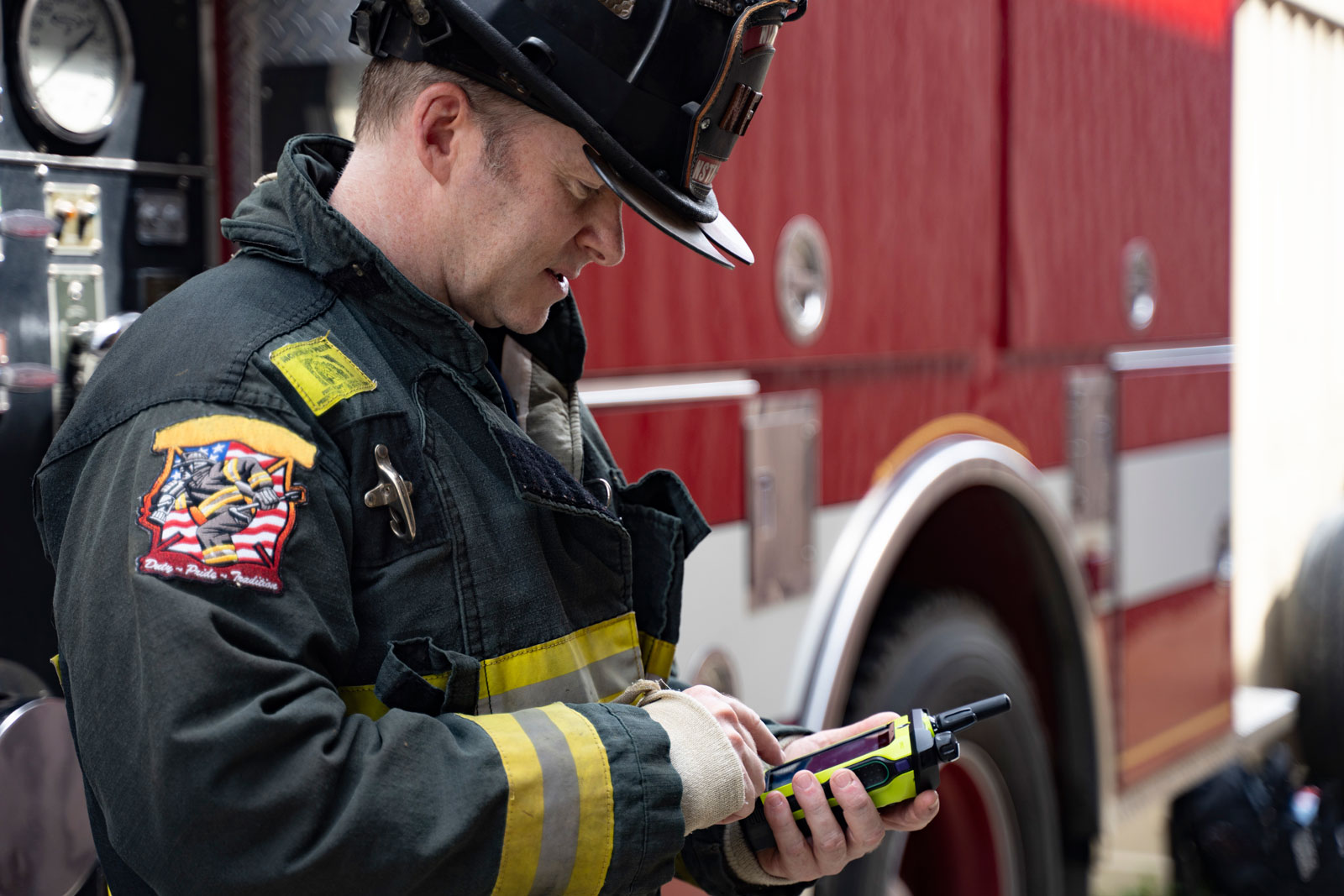 Firefighters rely on their fireground portable radios as the link to other crew members and commanders on a fire scene. Portable radio manufacturers regularly communicate with end users to determine improvements that can be made to portable radio designs.

Motorola Solutions has introduced the APX NEXT® XE Smart Radio, an improved-on version of its APX NEXT aimed specifically for use by firefighters. “We designed the APX NEXT XE’s features to keep it first a radio and then added mission-critical intelligence for firefighters in the field,” says Scott Alazraki, Motorola Solutions’ ASTRO® devices product manager. “The APX NEXT XE operates on all band LMR and LTE and has features such as ViQi™ Voice Control that allows quick access via voice to do 14 actions, such as changing channels, volume, and others, as well as SmartConnect, which automatically switches to broadband for voice communications when you go beyond the boundaries of your radio network.”

2 The front face of the APX NEXT XE has a large color display screen and oversize knobs on top of the unit.

Alazraki notes that the APX NEXT XE also has a SmartLocate function that delivers high-efficiency, high-precision location data of the radio; SmartMapping, which allows a mapping app to run on the device; a SmartMessaging app that allows the firefighter to receive information and images on the unit’s display screen; and Bluetooth® capability to allow the radio to link to a self-contained breathing apparatus (SCBA) mask.

Alazraki points out that aside from Motorola Solutions’ newest radio, it has a long history of providing radios and accessories to the fire service, including the APX® 6000XE, a P25 single-band portable radio; the APX® 8000XE, which combines interoperability, loud audio, and secure WiFi connectivity; the APX® 8000HXE, designed for the most hazardous conditions and certified to Div1 HazLoc standards; and the XE500 Remote Speaker Microphone, which has five integrated microphones and an Adaptive Audio Engine to automatically change the level of noise suppression, microphone gain, windporting (a technology to eliminate whining and howling sounds of wind blowing across a remote speaker microphone), and speaker equalization to produce clear and loud audio in any environment.

Dave Brandkamp, vice president of sales for the land mobile radio division at JVCKenwood USA Corp., says that JVCKenwood makes the NX-5000 series of portable radios “that offer unsurpassed interoperability for a wide variety of users as it supports three digital CAIs (digital trunking systems)—NXDN, DMR AND P25 Phase 1 and 2, plus FM analog in a single radio.” Brandkamp points out that an NX-5000 radio can simultaneously support two digital protocols plus analog.

4 The NX-5000 series radios comply with IP67/68 immersion standards and offer a maximum of two-hour protection at a depth of one meter.

The NX-5000 series has Bluetooth connectivity, he notes, allowing it to communicate with SCBA. “There are two portable radio configurations to choose from,” Brandkamp says, “one with a numeric keypad and the other without the keypad. Both styles feature a four-way directional pad; a two-position lever switch; and a 1.74-inch, 65,536-color transflective LCD capable of displaying multiline text and colored icons. In addition to sophisticated sound analysis and optimization technologies, these radios feature Active Noise Cancelling based on leading-edge digital technology to offer clear communications even in very noisy environments.” Brandkamp adds that during the development stage, NX-5000 series radios go through a number of stringent tests so that the portable radios comply with IP67/68 immersion standards and offer a maximum of two-hour protection at a depth of one meter and also comply with IP54/55 dust/water ingress protection standards.

Tim Vitou, president of BK Technologies, says that his company has been involved in making wildland tactical fire radios for many years, with agencies such as the U.S. Forest Service and CAL FIRE using its radios for their tactical communication fleets. “Our KNG2 portable radio has been widely adopted by the wildland fire community,” Vitou says. “It shares all user interface software with our previous DPH portable radio model but is smaller and lighter and has improved audio performance. The KNG2 portable radio has an easy-to-read color display and larger control buttons at the top.” He adds that the KNG2 has an IP67/IP68 waterproof rating, integrated GPS, Bluetooth connectivity, three programmable buttons on the side, 5,000 channels that can be dynamically grouped, text messaging, talk around, and emergency signaling.

BK Technologies also makes the BKR 5000 series portable radio that has a ruggedized design with a large, enhanced Gorilla Glass color display, integrated GPS and location services, and enhanced noise cancellation and is USB programmable by laptop computer. In the first quarter of 2021, BK Technologies also will be introducing the BKR 9000, for fire departments that mainly deal with structure fires. “The BKR 9000 will be our first multi-band radio,” Vitou points out. “Its form will be a little smaller than the BKR 5000 model but will retain its wide shoulders and will have a very large top display. The BKR 9000 will have internal WiFi, integrated GPS and location services, and internal Bluetooth with NFC pairing.” Vitou notes that BK Technologies’ portables are available in three tier models, with Tier 3 having a display, buttons, and a keypad on the front side; Tier 2 having a display and buttons; and Tier 1 having no controls on the face.