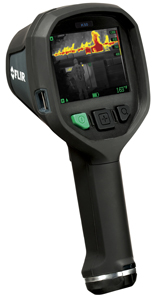 PORTLAND, OR—FLIR Systems, Inc. has released the K-Series, a brand new line of affordable fire service thermal imaging cameras (TICs). Designed for easier operation and better visibility, K-Series offers two models: the K40 with a 240×180 thermal detector at $3,995, and the high-resolution K50 with a 320×240 detector at $4,995.

Both TICs provide the advantage of five imaging modes to optimize sensitivity for higher or lower temperature ranges, including search and rescue (SAR) and hotspot detection options. A bright four-inch LCD clearly shows detailed images and colorized isotherms generated by the various dynamic ranges. And oversized buttons make it easy for gloved hands to quickly toggle through modes, press zoom, and access other functions.

K-Series also features onboard image storage for up to 200 thermal JPEGs, which can be reviewed later from the camera’s archive or exported via USB for reports. Plus K-Series comes with FLIR’s exclusive warranty covering the full camera for two years and the detector for ten.