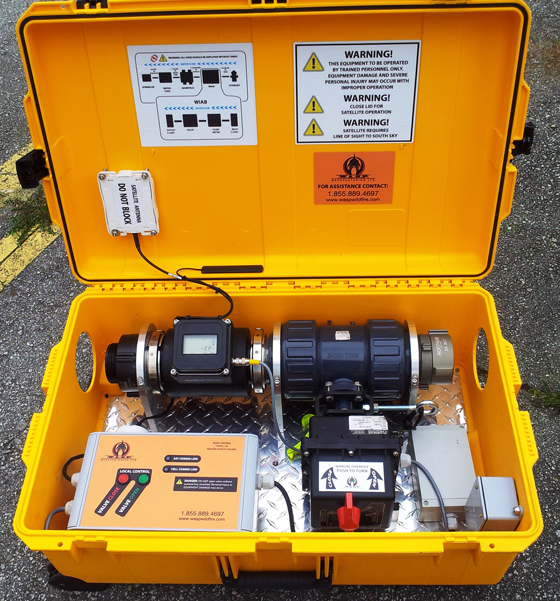 Throughout time, wildfires have been a valuable resource management tool to maintain ecological conditions. But as population throughout the world increases, communities are expanding beyond urban areas into what was once wilderness. This causes great conflict with these natural occurrences.

The destructiveness of a fire can be devastating. Lives are lost. Prized possessions are destroyed. Whether caused by dry conditions, mechanical sparks, or human negligence, the wrath comes at a very large price. Recent examples include more than 9.3 million acres burned during the 2012 wildfire season at a cost of about $2.7 billion in the United States. In early 2014, forest and peat fires in Indonesia affected nearly 50,000 people. In the Australia bush country, there have been twice as many catastrophic fires during the past three years than the entirety of the 1970s.

Wildfires also present long-term ecological problems. For instance, when vegetation on a hill or mountain is hit by fire, it can weaken the soil, causing land erosion and debris flow. Months after a fire, heavy rains can cause rock and mudslides down a burned-out mountain, creating another costly natural disaster.

Unfortunately, no matter how hard they try, emergency workers do not have the staffing to manage a growing fire or must evacuate for safety reasons before a fire is out. After 16 years of battling wildfires in British Columbia and Alberta, Canada, Darrell Pyke, a veteran wildland firefighter, decided there was a need for a new type of firefighting equipment.

To make the solution complete, it needed a system that allowed emergency personnel to remotely monitor and operate equipment from a safe location away from the fire.

Wasp Manufacturing worked with SkyWave Mobile Communications, a global provider of wireless data communications for the Machine-to-Machine (M2M) market, to integrate low-power satellite/cellular terminals optimized to work over terrestrial and satellite networks. Combining the technologies provides fire personnel with 360-degree visibility regardless of where a fire is occurring.

The system includes a mobile trailer containing hoses and sprinklers that are on a mobile platform. SkyWave provides one of the most important aspects of the WASP systems: the satellite/cellular terminals that allow remote fire protection and suppression equipment operations.

WASP is capitalizing on the operational, cost benefits, and reliability of SkyWave’s dual-mode communications solution to enable the best of both worlds. Rather than staying close to a fire once conditions are dangerous, this solution allows the WASP unit to be deployed to the location and then left behind without fire personnel to attend to it. The integrated dual-mode terminal houses both satellite and cellular modems in a single enclosure, eliminating the costs and complexities of integrating the two means of communication. Emergency personnel can automatically send and receive messages via land networks when within range and seamlessly switch to satellite service when the asset is out of range.

SkyWave terminals provide uninterrupted operations of the WASP equipment through Web programming rather than having to provide onboard computers. This allows for longer battery life, which provides more time to keep the operation unmanned in either dangerous or remote conditions.

SkyWave terminals provide a remote way to do the following:

One example of how WASP is protecting a community from structural damage in the event of a wildfire is the Peachland Fire and Rescue Service, in British Columbia, Canada. The system includes a trailer containing more than 1,500 feet of hose and sprinklers paired with SkyWave dual-mode terminals that allow the equipment to be operated remotely and offsite. From a cell phone or laptop anywhere in the world, the fire department can operate the system, programming it to turn on or off as needed.

The Peachland unit was tested in July 2014 when it was deployed to protect a mobile home park during the West Kelowna fire. More than 1,200 homes were evacuated during this fire, and the mobile home park was on the front line, with only one road in and out of the area. Once the sprinklers were set up, firefighters were able to leave the dangerous area and operate the system via a laptop computer at a safe location. The fire approached within 100 meters of the properties, but not a single home was lost.

“Our products can ultimately cost lives if the equipment does not operate as described and required,” says Randy Cowling, president of WASP Manufacturing. “With SkyWave’s state of the art technology, our customers have the most reliable communications, which ensures the communications reliability. This ultimately creates a safer environment for firefighters, emergency workers, and the general public.”

To the Rescue: Today’s “Heavy” Vehicles and Their Rescue and Training...