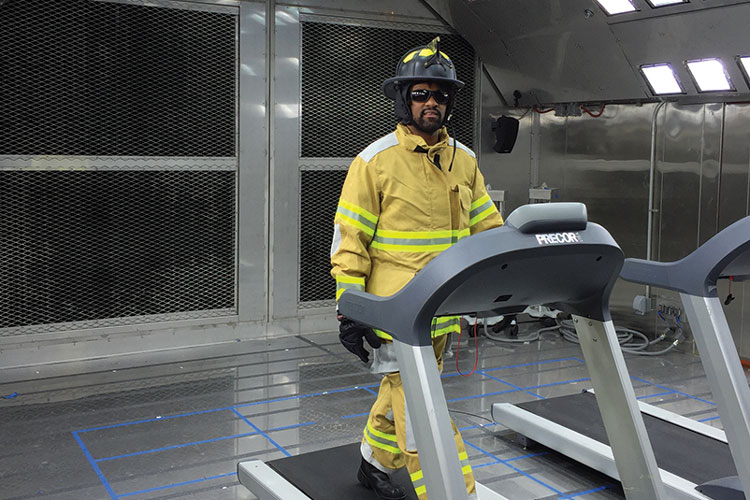 It’s not often that you get to meet and listen to the inventor of something we see and use every time we are alerted to an emergency.

But, that is exactly what happened recently when a group of press representatives from various industries, including the fire industry, met in the Elkton, Maryland, and Newark, Delaware, W. L. Gore & Associates facilities on November 17 and 18, 2016. The event coincided with the 40th anniversary of GORE-TEX® and the opening of Gore’s Biophysics and Heat and Flame Protection labs. The company is almost 60 years old, and it has endured because of its focus on the end user and an environment that encourages innovation with an emphasis on the long term.

As an associate who spent most of her career with Gore in the Fabrics Division, Terri Kelly, president and CEO, says that the event was a proud moment and served as an example of how “one invention can change the trajectory of a company. GORE-TEX-no one else has it.” It was Bob Gore, Bill and Vieve Gore’s son, who discovered expanded PTFE (ePTFE), the core of GORE-TEX, and he discovered it while trying to create a less expensive plumber’s tape. Sometimes that’s how things happen and, like Kelly says, it only takes one thing to change the trajectory of a company. Now GORE-TEX is 40 years old and is used in countless products throughout the world.

Bob Gore attended the event, having recently retired as chairman of the board at Gore. As he related how he discovered ePTFE, he explained how it wasn’t until 1993 that the company paid back all the investment it made in what became GORE-TEX. But, that is how the company works. It is interested in the long term. As Gore says, it is not patience, it’s persistence. And, the innovation comes from doing things, not talking about things. “Make sure the work we are doing is doing things, not planning things,” he told the audience. “You learn so much more when you start doing things,” he says. Kelly adds, “It’s hard to create a viable business when you are worried about quarterlies. GORE-TEX would have never come about. The nature of innovation is trying a lot of things. Not all work.” However, by focusing on the end user, Kelly says, it helps create the next generation of products.

The event began with various Gore associates providing a background on Gore, its products, and its new labs at the company’s Elkton, Maryland, EM5 location.

No matter who spoke, everyone always came back to the same phrase: “Fit for Use.” Everything that Gore produces is done with the end user in mind. And, these two new labs are an expression of this philosophy. The ultimate end use determines the type and level of testing each product goes through.

Many may be surprised to learn that there is a science behind every product Gore produces. For example, the Biophysics Lab is where products are put through their paces according to the science of comfort. Matthew Decker, comfort and biophysics core group leader, says there are four Ps of comfort: physics, physiology, perception, and psychology. Comfort also requires the right balance of comfort and protection and is a function of the clothing system, the activity, and the environment. Perceived comfort results from thermal, ergonomic, psychological, and sensorial aesthetic influences. This is where the new Biophysics Lab comes in. Gore conducts extensive testing in the lab to predict the effects of apparel, activity, and environment on the human body. It can measure the performance, protection, breathability, and comfort benefits for end users and can recreate a wide range of environmental conditions. Decker calls the lab’s Environmental Chamber its crown jewel. This part of the facility can simulate extreme environmental conditions from frigid to searing temperatures and humidity as well as winds. The chamber can replicate a complete solar cycle from sunrise to sunset.

The lab’s new Rain Tower can simulate realistic rainfall rates ranging from light drizzle to downpours. It can simulate rainfall up to three inches per hour, wind speeds of up to five miles per hour, and tempertures from 5° to 25°C. The Rain Tower is 7.5 meters high to achieve the proper rain drop velocity.

The company’s Heat and Flame Protection Lab includes a cone calorimeter that allows engineers to measure heat release characteristics of the fabrics used in finished garments, a stored thermal energy tester that evaluates time to burn in low heat flux scenarios, and a pyrolysis combustion flow calorimeter/micro combustion calorimeter that allows Gore to rapidly characterize heat release and fire-preventing char generation in the raw materials used to make its products.

These two labs represent millions of dollars in investment by W. L. Gore & Associates and also the culture of a company that is not afraid to reinvest in itself to bring about quality products for its customers. Part of that reinvestment is in its team of associates, which is now 10,000 strong worldwide. Gore is a privately held company and a company that has focused on investing on the front end to ensure that the products it brings to market are ready. It’s a focus on the long term vs. the short term. According to Kelly, the company’s DNA is about creating and doing things differently, and two of her challenges are to ensure the company does not lose the spirit of what made it successful in the past and to create an organization where its 10,000 associates can continue to thrive.

Another challenge is harnessing the energy of her 10,000 associates in a transforming organization. The pace of change in the industry means that the organization has to establish a balance between structure for speed but make sure products don’t develop so fast that the speed squashes creativity.

The company has come a long way since 1958 when Bill and Vieve Gore launched W. L. Gore & Associates in the basement of their Delaware home. What has not changed is its focus on the end user to ensure that no matter what the company produces, the end product is “Fit for Use.”

CHRIS Mc LOONE, senior editor of Fire Apparatus & Emergency Equipment, is a 23-year veteran of the fire service and a safety officer and former assistant chief with Weldon Fire Company (Glenside, PA). He has served on past apparatus and equipment purchasing committees. He has also held engineering officer positions, where he was responsible for apparatus maintenance and inspection. He has been a writer and editor for more than 20 years.