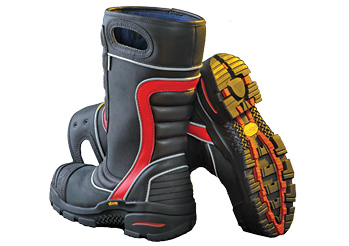 Derek Mitsch, product line manager for turnout gear and boots for MSA Safety, says MSA’s Globe SupraFlex™ boot “has a built-in flexibility in the boot to allow the firefighter to move without hindrance, promote safe movement, and lessen stress.” Mitsch points out, “The SupraFlex has a leather and fabric upper, with proprietary Dragonhide® fabric panels that are flame- and water-resistant to allow greater flexibility. The sole of the boot continues with a composite material in a molded foot bed with a Vibram® outsole that allows the sole to flex with the foot.” The 14-inch-high SupraFlex is a pull-on boot and is available with optional thick grip soles to give a stronger grip and added security.

2 The Globe Supralite® leather structural fire boot is a 14-inch-high model made on an athletic style.

3 The Globe Supreme® is another all leather structural fire boot made by MSA Safety/Globe.

Todd Herring, director of marketing for Fire-Dex, says Fire-Dex is introducing the FDXL200 heavyweight leather structural boot lined with a GORE CROSSTECH® moisture barrier to protect against liquid, bacterial, and chemical hazards. Herring says the boot has a seamless integration to reduce exposure to fireground contaminants by limiting ride-up and maintaining a seal with any leg dam, including those containing particulate barriers. “The kickplate has been reinforced, and the boot has integrated pull-on loops reinforced with an extra layer of leather and assembled with Kevlar® thread and has a Vibram Fire & Ice Compound sole that allows it to flex and grip the same at 480o as it does at -4oF.”

5 Fire-Dex has introduced the FDX200 heavyweight leather structural boot that is lined with a GORE CROSSTECH® moisture barrier to protect against liquid, bacterial, and chemical hazards.

Jon Gates, product marketing manager for Lion, says Lion is in partnership with Thorogood, where Thorogood makes the boots, and Lion is the marketing and distribution end of the partnership. “Lion Fire Boots by Thorogood produces five styles of structural boots,” Gates says, “three in leather and two in rubber.”

6 Lion and Thorogood have a partnership that produces the QR14 leather structural fire boot, which was introduced at FDIC International 2019. (Photos 6-7 courtesy of Lion.)

Bob Theriot, director of the fire division for Thorogood, says it introduced the QR14 leather structural boot at FDIC International 2019. “The QR14 is modeled after a motocross boot with flex gussets that allow the boot to move with the firefighter,” Theriot says. “The leather is waterproof, cut- and flame-resistant, piped with 3M™ Scotchlite™ Hi-Vis piping for high visibility, and has a GORE® CROSSTECH triple-layer moisture barrier to protect against bloodborne pathogens. The QR14 has a slip-resisting outsole with 90-degree heel and ladder grips for exceptional traction, a composite safety toe, Lenzi L-Protection® insole, and steel triple-rib ladder shank.”

Phil Jentoft, global marketing director for Honeywell First Responder Products, says Honeywell’s newest structural fire boot is the PRO Series Nighthawk™ 5555, calling it “an athletic-fit structural boot that articulates naturally with the foot and ankle; gives extended duration comfort for long work periods; and has improved visibility below the pant line, which helps firefighters locate fellow responders in low visibility on the fireground.” The Nighthawk 5555 is made with a flame- and water-resistant cowhide leather upper with flexible joint transitions and has an oblique steel toe cap, a Vibram Racer outsole, a beveled heel and notched perimeter lugs to move better over uneven terrain, a steel triple-ladder shank, and a steel flex-sole plate.

Jentoft points out that Honeywell “is seeing a progression toward lightweight, more comfortable structural fire boots. We did a lot of voice-of-the-customer work with firefighters to get details on what they wanted in a fire boot, and the two most highly rated features were flexibility and mobility, which we built into the Nighthawk 5555. Honeywell also is investigating how to make fire boots more easily cleaned of contamination—both inside and out. As for the next generation of structural fire boot, we expect to see elements of more specialized and athletic footwear built into fire boots.”

9 HAIX also makes the Fire Hero Xtreme® leather structural boot with a slip-resistant outsole and PU foam injected into the sole to insulate it.

The Fire Hero Xtreme uses the same leather and inner lining, has a slip-resistant outsole, and has PU foam injected into the sole to insulate against heat and cold. The Fire Hunter USA is a leather structural boot with a stainless steel puncture protective sole, while the Fire Eagle Air is the lightest of HAIX’s structural boots and is based on an athletic shoe platform for greater flexibility.

Jarrod Beard, director of industrial sales for Carhartt Footwear/Black Diamond Group, says Black Diamond makes the X2 leather structural firefighting boot on a multifit system with a three-part insole. “There’s an Ortholite® insole on top with two layers of high-density plastic underneath,” Beard points out. “A firefighter can remove one layer and drop the foot down with the boot going from medium to wide or remove the second under layer, which drops the foot more and makes it wider. We want a snug fit so the foot doesn’t move in the boot.”

He notes the X2 has a heavyweight leather upper, a GORE CROSSTECH membrane with an Omaha lining, a Kevlar liner for cut protection, a calf-fit system allowing for extended calf width for flexibility and comfort, a proprietary rubber comfort cup sole, a steel toe, and a three-point heel lock system.