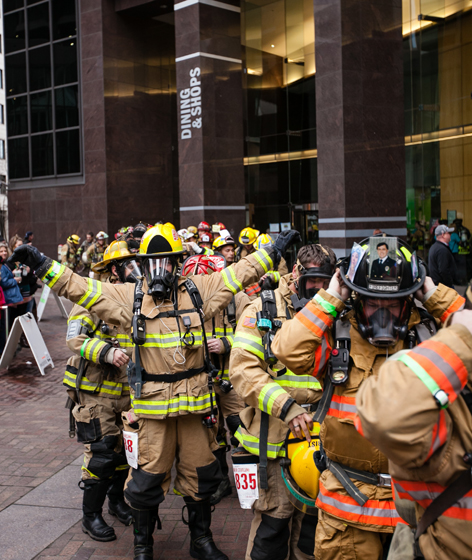 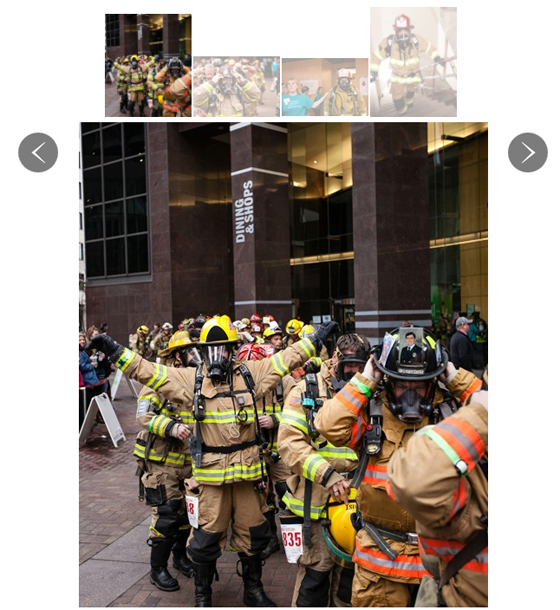 The sold out event—one of the largest stairclimb events in the world—provided an opportunity for a record 1,925 firefighters to climb 1,311 steps and 788 vertical feet to the top of Seattle’s Columbia Center Tower. Some 300 departments have been practicing for months for the challenge, which pits firefighters against one another as they race up 69 flights of stairs wearing approximately 70 pounds of protective gear and breathing apparatus.

Firefighters assembled at the foot of the Seattle landmark Sunday morning, and the first firefighter entered the stairwell at 9:00 am, followed in 15-second intervals by competing climbers. Historically, climbing times average 20 to 30 minutes, and winning stair climbers come in around 11 minutes. Competing firefighters race in full turnout gear—boots, pants, coat and liner, helmet, gloves—and breathing equipment must be worn during the climb. The event is so strenuous that firefighters typically must change out empty oxygen bottles for full ones, since the competitors must use SCBA gear for the entire race. A bottle exchange area on the 40th floor gives teams the chance to replenish oxygen.

“The Scott Safety Firefighter Stairclimb is about strength, resilience, and commitment,” says Jeff Emery, director of marketing for Scott Safety. “We are so proud and honored to be part of such a worthy cause that embodies these characteristics. It’s what Scott is all about—protecting what matters most, whether it’s the men and women of the fire service fighting danger on a daily basis or the child with lymphoma fighting for a future. It’s this passion for saving lives that we share with everyone involved in this event and it’s why we do what we do.”

First to the finish line was firefighter Andrew Drobeck, with a time of 10 minutes and 46 seconds. This is Drobeck’s fourth consecutive win. In 2012, he broke the world firefighter stair climbing record, climbing Seattle’s tallest building from bottom to top in 10 minutes and 38.2 seconds. Firefighter Michelle Croft from Columbia River Fire & Rescue was the top female finisher at 14 minutes and 54 seconds.

Since its inception, Scott Safety has helped raise $10 million for The Leukemia & Lymphoma Society. The funds are used to help treat patients with leukemia, lymphoma, Hodgkin’s disease, and myeloma, as well as improve the quality of life for patients and their families.