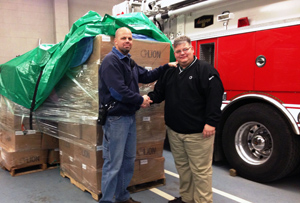 DAYTON, OHIO—A period of time has passed since the East Coast was devastated by the effects of Hurricane Sandy, but the cities and towns most devastated—along with the first responders that serve them—continue to work toward recovery with each passing day.

Many of these relief efforts are being driven by the region’s committed career and volunteer firefighters, whose own departments are in need of help as well—with the toll the storm took on their facilities, clothing and other equipment that was damaged from flooding or due to its extensive use in response efforts.

LION announced a recent donation of thousands of items valued at more than $125,000 to the Long Island area’s first responders, with distribution assistance provided by the Long Beach (NY) Fire Department, one of the fire departments who absorbed significant storm damage. LION’s donation includes items such as fire-retardant shirts, cotton shirts, pants, lined coveralls, fleece vests, jackets and structural firefighting gloves to replace gear that might have been ruined during the recovery efforts.

“LION never forgets what our customers do for our cities and states and country,” said LION CEO Steve Schwartz. “These first responders don’t even give a second thought to getting out there in the most dangerous of conditions to respond to those in need. It’s just what they do. We want to be able to help and respond to them in the same fashion.”

Long Beach Fire Department Assistant Chief RJ Tuccillo, who lost his own home in the storm, has been staying at one of the Long Beach fire stations and using the facility as a distribution center for items donated to the first responders and the community at large. He said his and other nearby fire departments are very grateful to be remembered at a time when they have been so focused on helping others in their communities. “The outpouring of support has been just ridiculous,” said Tuccillo. “Donations like these from companies like LION go a long way in helping our firefighters and the people of our communities through this difficult time.”