Efforts being made by turnout gear manufacturers include protective fibers and fabrics that go into the types of turnout gear being worn, new designs of protective firefighting hoods, and paying close attention to the interface areas of PPE.

Chronic exposures to toxic combustion products and particulates found on firegrounds are believed to contribute significantly to higher occurrences of certain cancers in firefighters according to various studies, especially testicular cancer, prostate cancer, and non-Hodgkin’s lymphoma.

Karen Lehtonen, vice president of innovation and product management for Lion, says that Lion has several initiatives working against contaminants, including an independent service provider of Lion Total Care, which focuses on the care and maintenance of turnout gear, as well as a company that provides digital training devices and props aimed at decreasing the incidence of particulate contamination of firefighters.

“On the PPE front, one of the exciting things we’ve done is partner with the U.S. Department of Homeland Security’s Science and Technology Directorate and North Carolina State University on the Smoke Resistant Turnout Project,” Lehtonen says. “As the manufacturing partner on the project, Lion looked at how we could increase the protection at the interfaces of turnout gear, the cuffs of coats and pants, the bottom of the coat, and the neck area. We studied ways to reduce the ingress of particulates but not impact the donning time of the gear or physiologically affect the firefighter.”

Alysha Gray, Lion’s product manager for fire PPE, says the project first focused on using an existing moisture barrier with improved interfaces to provide an increased level of protection with minimal change to the look or function of the gear. She says that smoke-impermeable fabrics were used at the wrists, at the ankles, and in an internal skirt structure in the coat that prevents smoke from entering. Besides being built into Lion PPE, the improvements also can be retrofitted into any manufacturer’s turnout gear, she points out.

A second design originated by Lion used the enhanced interface designs and incorporated a removable bib onto the turnout pants to prevent smoke from reaching a firefighter’s skin. That turnout design, Gray notes, includes the wristlet and calf protection but no internal particulate skirt on the coat. “As part of the DHS study, we completed Fluorescent Aerosol Screening Test (FAST) testing, and the data showed the turnouts performed well in blocking particulates,” she says. “The prototypes meet National Fire Protection Association (NFPA) 1971, Standard on Protective Ensembles for Structural Fire Fighting and Proximity Fire Fighting (2018 ed.).” 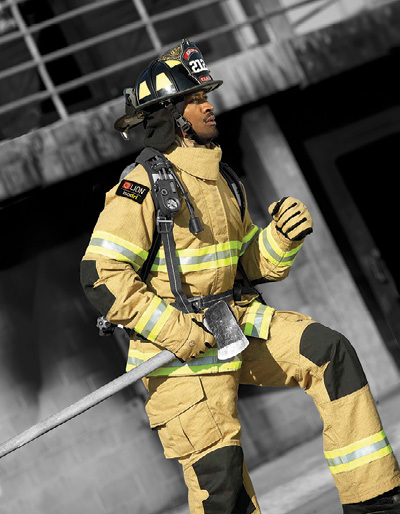 1 Lion was the manufacturing partner in the Department of Homeland Security’s Smoke Resistant Turnout project, which increased turnout gear protection at interfaces like the cuffs of coats and pants, the bottom of the coat, and the neck area. (Photo courtesy of Lion.)

Todd Herring, director of marketing for Fire-Dex, says his company “from a product development perspective is very concerned about the incidence of cancer in the fire industries where all the studies show that particulates entering into the bloodstream of firefighters are likely causing the higher rates of cancer we’re seeing.” Herring notes that Fire-Dex has a twofold mission with PPE: help address firefighter heat stress and reduce exposure to carcinogens. “These missions drive our research and development efforts,” he says.

“In 2017 at FDIC International, we launched the Interceptor package,” says Herring, “which bundles our FXR turnout gear, the H41 Interceptor Hood, and single-layer TECGEN wildland and rescue gear that meets NFPA 1977, Standard on Protective Clothing and Equipment for Wildland Fire Fighting (2016 ed.), and NFPA 1951, Standard on Protective Ensembles for Technical Rescue Incidents (2013 ed.)” 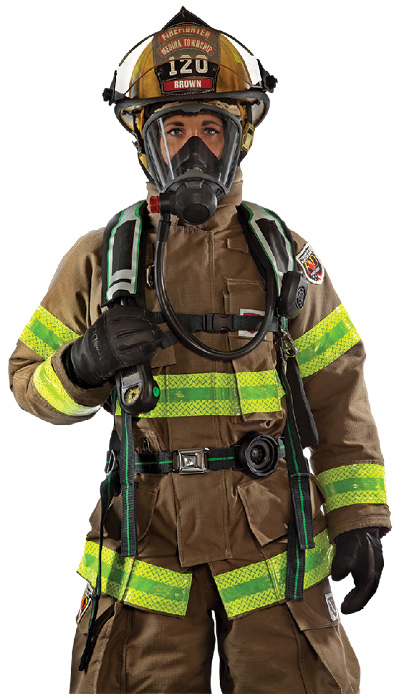 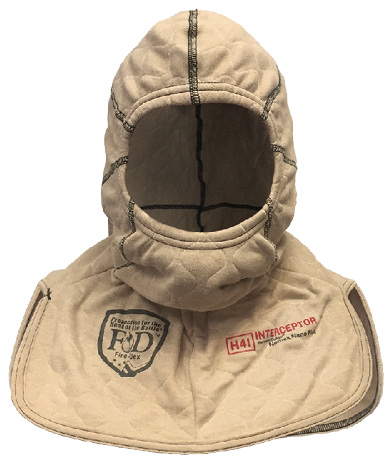 3 The H41 Interceptor Hood made by Fire-Dex is made with a layer of DuPont™ Nomex® Nano Flex that reduces exposure to fireground particulates.

Claude Barbeau, general manager of INNOTEX, says his company makes the INNOTEX GRAY turnout gear that uses Stedair™ Prevent, a breathable, air-permeable, flame-resistant particulate-blocking material at the gear’s wristlets and sleeve wells, in an elasticized leg gaiter, and in an elasticized storm band between the turnout coat and pants. “All those interfaces should be protected in order to avoid being compromised by particulates and to reduce the risk of contamination,” Barbeau points out. 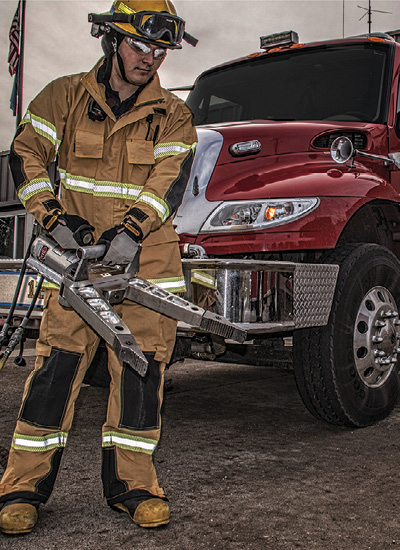 Ryan Davidson, director of sales for Crew Boss, says his firm makes the Trex Gear line of structural and wildland/rescue PPE, “garments designed for parity with other PPE manufacturers that use high-end quality fabrics from DuPont, TenCate, PBI, and Safety Components.” He adds, “Premium Trex meets the NFPA 1977 standard, while Trex Gear meets the NFPA 1977 and 1951 standards. The most often used protective fabrics are those from TenCate and Safety Components.” 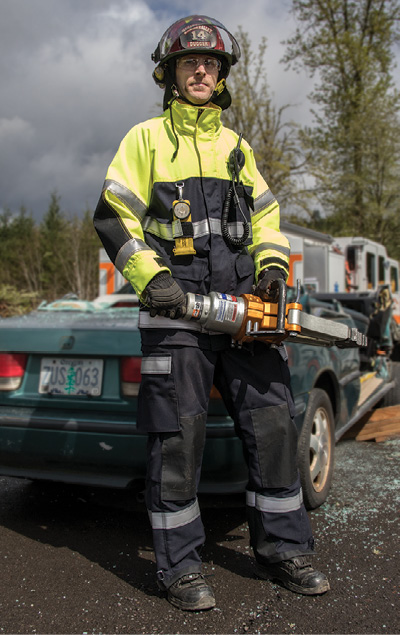 5 Trex Gear made by Crew Boss PPE is made to meet the NFPA standards for wildland firefighting and rescue operations.

Herring says that Fire-Dex launched its H41 Interceptor Hood in 2016 “to help prevent passage of known particulates, especially in the neck area, and keep them off the skin, not allowing them to get into a firefighter’s bloodstream. The H41 is made with a layer of DuPont™ Nomex® Nano Flex inside that acts as a filter to reduce exposure to fireground carcinogens and other contaminants.” 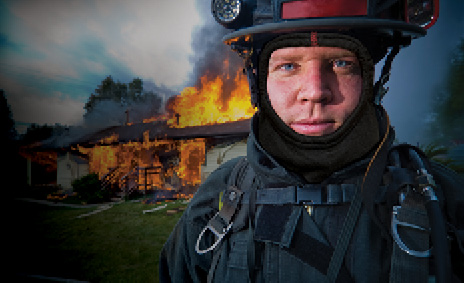 Edelman says that last year Gore launched a firefighting hood that uses a particulate-blocking fabric layer throughout the entire hood. “We wanted the most breathability in the hood, so while it blocks particulates, it’s not designed to be waterproof or to block blood, body fluids, or chemicals.” Edelman points out that Gore’s hood meets the NFPA 1971 optional standards for particulate-blocking hoods. “The standard requires a 90 percent efficiency minimum in particulate blocking,” he says, “and the Gore hood went through FAST testing that shows the hood hits 99.9 percent particulate blocking, even after 100 wash cycles.” 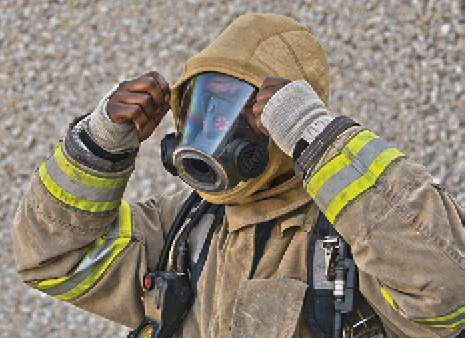 7 A firefighter dons a BarriAire Gold Hood made by PGI Inc. that gets its particulate blocking power from an inner layer of DuPont™ Nomex Nano Flex. (Photo courtesy of PGI Inc.)

Jim Sonntag, owner of PGI Inc., says his company was one of the first in the country to start making firefighting hoods in the 1970s. “The styles today are similar to back then, but the materials have evolved, and the designs have been enhanced, especially with the work that we have done with the military—particularly the U.S. Navy,” Sonntag says. “They have very specific needs similar to those of firefighters, so we’ve made the bibs longer, gave the hoods flat seams, and offer more choices.”

Sonntag says that PGI blends the fibers that go into its particulate-blocking hood, the BarriAire. The hood meets NFPA 1971, Sonntag points out, and uses PGI ® Bold FR fabric for heat, flame, and thermal resistance and offers high tensile and tear strength for longer life. Particulate-blocking power comes from a lightweight inner layer of DuPont Nomex Nano Flex fabric that inhibits penetration of contaminates and carcinogenic particulates between 0.1 and 1.0 microns, he adds.

Barbeau says his company makes the INNOTEX GRAY 25 firefighting hood that has three layers: a shoulder and back bib made with 20 percent Nomex and 80 percent Lenzing® FR; a full particulate-blocking layer of Stedair® Prevent, which also gives air permeability; and a 100 percent viscose filament that has soft, superior wicking properties. He notes that the hood meets NFPA 1971.

Herring sums up the efforts being made by all manufacturers involved in making PPE. “This is the single most important issue facing the fire industry today, and we all are pushing hard to make a difference for firefighters.”