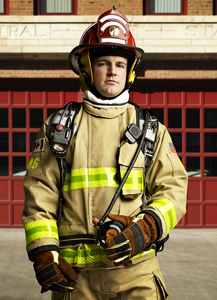 When it comes to fabrics and turnout gear, firefighters continue to request more comfort and lighter weights, and TenCate Protective Fabrics continues to respond. The conversation is getting a lot more sophisticated. It’s not just about simple weight or softness. To address these requests, TenCate is making several introductions at FDIC 2014.

First, the company is introducing the TenCate Kombat™ Flex, which features comfort and durability in a new 6.9 osy outer shell. According to TenCate, this fabric maintains the tough standards that TenCate has built its reputation on, so seven out of 10 United States firefighters now wear TenCate textiles.

TenCate Protective Fabrics continues to share a lot about comfort for the firefighter and, in that spirit, the thermal barrier is the closest to station wear and the skin. TenCate Coolderm™ Technology is available on all its thermal barrier facecloths including Quantum3D®, Defender® M, and Caldura®.

The Fun Side
In addition, our TenCate’s #RhinoTough t-shirt from 2013 will probably get a 2014 makeover. Because of the demand for the 2013 t-shirt, the company decided to sell it online from November to March for only $5. For every $5 t-shirt sold, TenCate Protective Fabrics gave $5 to the National Fallen Firefighters Foundation. That resulted in more than $7,000 as a gift.

To encourage attendees to visit TenCate’s partner booths, the company assembled a collection of #RhinoTough trading cards. These cards are available exclusively from TenCate partners (20 or so). The cards feature a character from a new children’s fire prevention book that will also be sold online following FDIC, again benefitting the National Fallen Firefighters Foundation.

TenCate has two booths at the show. TenCate says to expect to see something really big at its smallest booth, #6071 in the lobby of Hall D, right near the entrance.

Among the benefits TenCate considers for FDIC attendees is relationships; people meeting people. Firefighters will find that trading information with other firefighters as well as honest vendors like TenCate Protective Fabrics, there will be the beginnings or the continuation of a rapport that will only grow.

For updates throughout the show, visit http://firstfirefighter.com/.