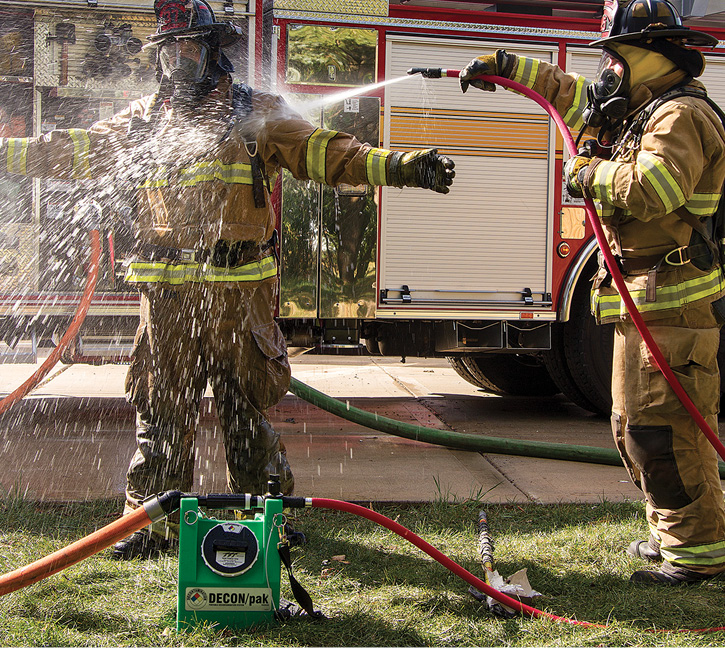 Portable decontamination kits and showers are being integrated into after-action incidents on fire scenes to perform gross decon of turnout gear, self-contained breathing apparatus (SCBA), and other equipment before they are returned to the apparatus.

Typically, more thorough decon procedures are carried out at the station. The various on-scene portable decon units available to firefighters run the gamut from simple cleaning kits to more expansive systems that still remain easy to use.

Philip Gerace, vice president of marketing for Task Force Tips (TFT), says that several years ago TFT saw the need to address the issue of removing particulates from personal protective equipment (PPE) and fire equipment before they were reloaded on fire vehicles. “We had a ProPak proportioning system that we used as the base design and customized it for decon application,” Gerace says. “We did field trials with fire departments around the country and got great feedback that caused us to make big changes to the proportioning system to allow for different types of detergent and for a hard-hitting fan nozzle to get contaminants off the gear better. We also switched to a plastic pickup tube instead of stainless steel, which would react with bleach if the unit were used to decon for bloodborne pathogens.”

1 Task Force Tips makes the DECON/pak Portable Decontamination System, a 2½-gallon concentrate tank that can inject decon agents from 0.1 to 0.5 percent and puts out 12 gpm at 100 psi. (Photos 1-2 courtesy of Task Force Tips.)

5 The Official Rehnke Decon Kit is designed to decon a crew of four firefighters.

7 The Husky decon shower system includes a PVC shower with four shower heads and is available with elevation grids and shower curtains.

Hygenall’s FieldScrub is a heavy-duty full body hazmat decon towel, McKinnon says, that removes soot, grime, germs, heavy metal oxides, and chemical/drug residue. The company’s FieldWipes are designed for cleaning skin and remove 99 percent of heavy metals, soot, plastic residue, and germs, he adds. “Hygenall FieldWipes don’t contain trisodium phosphates, which are dangerous to first responders because they may help transport toxins deeper into the skin layers and possibly into the bloodstream,” McKinnon observes. Hygenall ToxOff is used for surface and PPE decon and cleaning, he notes, and is available in soap forms for use on laundry, vehicles, floors, and driveways.

Ed Cunningham, owner of First Responder Decon, is a retired El Mirage (CA) Fire Department firefighter who moved to Surprise, Arizona, in the Phoenix metropolitan area. “I had been working on decon at El Mirage and, when I moved to the Phoenix West Valley, developed the Official Rehnke Decon Kit as a charity initiative with firefighter Dave Rehnke of the Mesa (AZ) Fire and Medical Department,” Cunningham says. “We got together with the engineers at Decon7, the makers of TruDecon, a compound that encapsulates contaminants, extracts and removes them, and detoxifies contaminants to render them inert.”

The Official Rehnke Decon Kit is designed to decon a crew of four firefighters and consists of a sprayer, TruDecon compound, bags, zip ties, and Firewipes to wipe contaminants off the skin. “We want to decon as much as possible before coming off air,” Cunningham observes. “When mixed, the three-part TruDecon compound is activated, then sprayed on to soak the turnout gear. We recommend waiting five minutes, then remove the gear and bag it. Once mixed, TruDecon has 100 percent efficacy for eight hours and can be used in decon washers at the firehouse.” He adds that the compound can be atomized to decon the interior and exterior of a vehicle. “It’s electronics-friendly when atomized,” Cunningham says. “You can fog the interior and also the air conditioning vents, let it set for a couple of hours, and return to do a wipe down.”

Jay Claeys, president of Husky Portable Containment, says that Husky makes a decon shower system that can be set up anywhere water is available. “The shower system includes a PVC shower with four shower heads, hose with a hand sprayer, a 4- × 8- × 1-foot steel or aluminum frame decon pool (also a 5 × 5 and 4 × 4 are available), and a carry bag,” Claeys points out. “The shower system is lightweight, collapsible, and can be assembled quickly. Elevation grids and shower curtains also are available.”

Claeys says the PVC construction has quick-connect cam lock fittings and that the four shower nozzles put out 4.2 gpm at 40 psi. “Shower weight with the curtain and storage bag is 70 pounds,” he notes, “and the assembled dimensions are 42 × 36 × 84 inches. The shower can be supplied by garden hose or other types and has a shutoff valve to allow it to be kept charged.”

Nick Ruller, chief of Niagara-on-the-Lake (ON) Fire & Emergency Services, says his department has a TFT DECON/pak unit on each of its five front-line pumpers. “We wanted on-scene decon to become second nature for our firefighters, so we normalized it as part of our operations and use the DECON/pak for small-scale on-scene decon,” Ruller says. “The pumpers also carry bags to contain the contaminated gear and equipment, which is brought back to be further cleaned at the station.”

9 A Niagara-on-the-Lake (ON) firefighter gets gross deconned on a fire scene using a TFT DECON/pak.

Niagara-on-the-Lake also has a support unit that can be requested to respond to any incident, Ruller points out. “Its primary function is firefighter rehab, but it also carries additional decon hygiene equipment like garden hoses, long-handled brushes, detergent, and buckets,” he says. “The support unit also carries a four-sided 12- × 12-foot tent for winter operations and a portable heater so we can do decon in the tent.” Niagara-on-the-Lake has 110 paid on-call volunteer firefighters operating five pumpers, two aerial ladders, two heavy rescues, and one light rescue out of five stations.