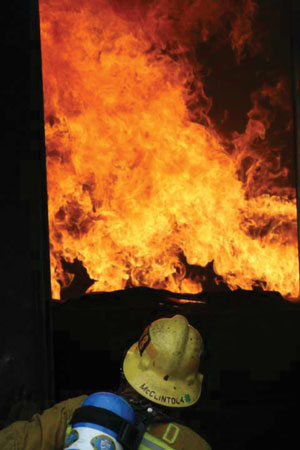 This is because not only has Russell spent a great portion of his career in the fire service, but for the past 40 years he has spent a lion’s share of his time producing products that better protect his brethren. In the process he has created a legend of sorts. His product? Fire helmets.

All of this started in 1969 when Russell, who at the time was a captain in the California Division of Forestry, met Ronny Coleman, who was a captain with the Costa Mesa (CA) Fire Department, over a mutual interest in collecting fire helmets from all over the world. One day, while discussing their interest in collecting, Coleman asked Russell if he was happy with his fire helmet.

“When he asked that,” Russell recalls, “I had to say no, and we decided to meet to discuss what we thought we could do to create a better helmet, one that offered better protection and was more ergonomically designed, not to mention more comfortable to wear. Interestingly, when we met, we discovered that we had each designed a helmet that was virtually the same. I guess that’s evidence that great minds really do think alike.”

The helmet the pair designed was what is now called the company’s First Due series, which not only featured a roomier fit but also allows wearers to use interchangeable parts, such as chin straps, liners, ID brackets, D rings, and other features that allow users to customize their helmets.

The men created prototypes of their design, which each of them wore while working. Other firefighters began asking them for copies of those helmets for use. Before the two friends knew what hit them, the demand spread. The duo started their business with $22,000 and high hopes to produce a line of helmets that would not only incorporate the tried-and-true designs of traditional fire helmets but be complete with the latest and greatest in materials. After four years in this experimental mode, they were selling nearly 1,000 of their helmets each month.

Today, the company, called Phenix Technology, is headquartered in Riverside, California. Since it is a privately owned company, officials do not reveal sales figures, but they do concede that they are a multimillion-dollar business. Phenix is family owned and operated, with several members running their own portion of the enterprise. Russel serves as president of the firm, while daughter Nichole Clesceri serves as chief financial officer. Shaun Russell, a son, serves as national sales and marketing manager. Three other family members also work for the corporation.

On the Side of History

For more than 200 years, fire helmets have been designed for two purposes, protection and comfort. And although some fire helmets today are made with modern materials, in many cases, those helmets are created with the material they have been made from since the beginning-leather. “If I lined up 500 firefighters from the East Coast and asked them what kind of fire helmets they prefer, virtually all of them would tell you that they like the traditional design,” explains Angel Sanchez, the company’s chief operating officer. “We sell a lot of the modern designed helmets, but our traditional design, the leather with wide brims on the front and sides and longer brim in the back, is a huge seller.”

More along the lines of the traditional helmet but with composite materials and other features is the TC1, a composite firefighting helmet. The importance of a quality fire helmet has led to the company being able to weather the ups and downs of the economy better than most. Another help has been the mandate by National Fire Protection Association (NFPA) guidelines that require fire helmets to be replaced every 10 years. Sanchez also adds that firefighters almost always get a new helmet whenever they are promoted.

The company’s Riverside location has been the third for the firm, moving from San Clemente, California, to Corona, California, in 2000. Further, the firm has begun marketing strategies that will cause it to expand into the Middle East, Latin America, and Asia. Success in these markets will probably lead the firm to outgrow its current facilities, which it hopes to expand. This is beyond the marketing networks that the company already has.

Regardless of where the company goes in terms of sales, Sanchez emphasizes the “Made in the USA” connection on all products made by the firm. In fact, nearly 95 percent of the components that go into Phenix helmets are produced in the Inland Empire region of Southern California. At the headquarters location, workers assemble each helmet by hand, completing hundreds each day.

Every year, Phenix sells thousands of helmets to firefighters around the world. Some firefighting agencies purchase helmets for their personnel; others allow individuals to purchase their own, costing anywhere from $200 to $800, depending on the amount of customization required. Russell is quick to say that a huge motivator for him is protecting his fellow firefighters. In fact, Russell is proud of the fact that each year he gives away fire helmets to departments around the world that cannot otherwise afford them for their personnel.

It would be hard to pay a visit to the Phenix Technology facility without becoming engulfed by the prized 650-square-foot display of firefighting memorabilia that is the entry of the business. What’s more astonishing than the size of this display is the fact that it accounts for less than 20 percent of the historic equipment, models, alarm boxes, and clothing that Russell has collected since 1967. “My family describes this as what happens when a hobby gets out of control,” Russell explains. “I think it’s hard to be involved in a profession such as firefighting and not be drawn into aspects of it as a collector. Then, when certain things that so heavily involve firefighting such as the events of 9/11 happen, entirely new avenues of collecting open.”

There are certain collectibles that are hard to avoid adding, such as a Phenix fire helmet that was worn by Dennis Quaid in the movie Frequency, helmets that were created to honor the 343 firefighters who perished in the 9/11 attacks, a Japanese turnout coat, a helmet from 1920, and a brass French helmet made in 1740. Other notable parts of the collection include hundreds of toys with firefighting themes as well as miniature firehouses that light up and encircle the top shelf of the room.

Russell’s favorite piece of memorabilia, however, is a photo, badge, and #5 helmet of John H. Russell, his father, from the San Diego (CA) Fire Department, dated 1940. “That’s one piece that will always be number one in my heart,” Russell says.