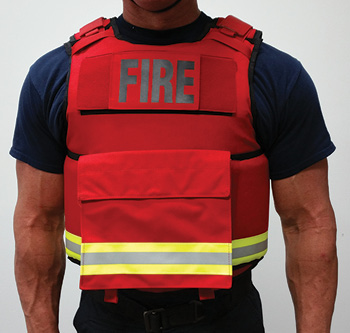 Fire departments and emergency medical services (EMS) squads around the country are either weighing the possibility of or actively outfitting at least some of their personnel with bulletproof protective equipment that would allow them to function in an active shooter incident. Departments say while it’s the police’s job to neutralize an active shooter, it is the fire and EMS job to remove wounded individuals from harm’s way.

Pena says that every seat position on a fire apparatus has its own ballistic gear, which stays on the apparatus when not in use. “We have four seats on each of our engines and trucks,” he notes, “and each ambulance has two paramedic seats.” Pena says that the body armor is not designed to be worn over personal protective equipment (PPE) but rather over a firefighter’s duty shirt. Dallas Fire-Rescue employs 1,500 paid firefighters.

Dallas firefighters, paramedics, and battalion chiefs were trained by Dallas police officers on the proper procedures for using ballistic vests, Pena observes. “Police, in a first wave, wear black ballistic vests, and the cops want us in the second wave to be easily identified when in the hot zone with them, so our vests are red because they don’t want us to make contact with a perpetrator.”

Craig O’Malley, lieutenant and EMS supervisor for Falmouth (MA) Fire-Rescue, says his department’s 75 paid firefighters cover a 44-square-mile town from five stations in dual roles, staffing advanced life support (ALS) ambulances and cross-staffing engines, a ladder, and a boat. “Because we cross-man apparatus, we have body armor on every front-line vehicle plus for the shift commander, deputy chief, chief, and EMS supervisor,” O’Malley says. “In July of 2018, two Falmouth police officers were shot—one grazed in the head and the other in the vest twice. We were treating victims on the lawn when more police ran to the house with guns drawn because of a possible second shooter. We dragged the injured to cover and continued treating them, but later the chief told me to get a quote on ballistic vests and helmets for our personnel.”

O’Malley says that Falmouth chose Chase Tactical for the body armor and plate carrier as well as a ballistic helmet. “It’s 35 pounds of ballistic gear that we wear over our duty uniform,” he points out. “We use our regular fire radios, and on the vest, we have a small bag with stop-bleed equipment, two throw bags with compression bandages, and other medical supplies. One of the throw bags goes with every vest and helmet.”

Brad Pinsky, retired chief and volunteer firefighter with the Manlius (NY) Fire Department, says Manlius has 11 paid firefighters and 60 active volunteers who handle fire operations and two transporting ALS ambulances. “I believe we were the first in the country to mandate wearing ballistic vests for all EMS personnel on a scene with no discretion,” Pinsky says. “You can’t determine when you will be shot at or stabbed, and because such things are not predictable, we mandate wearing the equipment at every scene.”

3 Falmouth Fire Department has body armor, helmets, and medical bags for each seat position on its fire and EMS apparatus.

Pinsky says the department currently has 20 ballistic vests in service, all Point Blank models in two versions. “The basic model has front and back steel plates about a quarter inch thick and weighs 16 pounds,” he says, “while the six-pound model gives the same level of protection from 1¼-inch plates of a composite material. We are fortunate that while there have been threats we responded to, there have been no actual shooting or stabbing events while our people have been wearing the vests.”

Randy Reyes, arson investigator for the San Antonio (TX) Fire Department, notes San Antonio has 54 fire stations and nearly 3,000 paid firefighters, two rescue and two hazmat teams, and a fully integrated EMS system. “When it came to active shooter response, we looked at starting out with six stations with training and ballistic gear in 2016,” Reyes says. “The gear had to be designed for rescue, protecting medics, and saving lives.”

Reyes says the ensemble that San Antonio came up with comprises gear from several manufacturers. “We have a ballistic vest and helmet with reflective vest identification patches on it in a special color, MOLLE webbing, ballistic rifle plates in a carrier vest, and soft armor protection as well,” he points out. “We started with our tech rescue and hazmat teams, with vests using level 3 high-performance rifle plates that can take multi hits but weigh only 12 pounds. Now we have 32 stations outfitted on a combination of trucks and engines, with four kits per vehicle of one-size-fits-all ballistic gear that’s adjustable. Our rescue team has 10 kits, and each member gets his own. Each four ballistic kits also are paired with two medical bags.”

He points out that some things to consider when purchasing ballistic protection gear are that there is sufficient coverage of the body, a good range of motion for the medic, the weight of the gear, and the flexibility of the gear to fit everyone. “We currently are doing night training,” Reyes notes. “The helmet has a light for hands-free capability, so we are testing the response and equipment in night scenarios.”

Hezedean Smith, assistant chief for EMS operations at the Orlando (FL) Fire Department, says his department has Point Blank R20 soft armor at every seating position on engines, aerials, and a heavy rescue. “Our engines and trucks have four seating positions each, with the exception of three engines set up for three seats, and the heavy rescue seats five,” Smith says. “The department’s current operational strength includes 550 firefighters, paramedics, and EMTs.”

Smith points out that Orlando went with a Level 3A soft armor vest that is worn over a duty uniform but does not include plates. “The vests and ballistic helmets are not worn all the time but only to scenes of violence or active shooter scenes,” he says. “And, our people would not be part of a rescue task force but are trained for triage and treatment in the warm zone and cold zone of a scene. Ideally, in the future, we want to outfit each individual in the department with their own vest.”

Michael Haynes, brand strategy director for Point Blank Enterprises, says Point Blank’s First Responder Kit runs from the minimum allowable coverage up to full coverage scalability. “The FRK360 is our basic unit, the FRK720 has more customization and adjustability, and the FRK1080 is fully adjustable to fit anyone in the station,” Haynes says. “The FRK360 is a chassis that can hold steel or composite rifle plates, while the FRK720 and FRK1080 also have soft armor for the torso and side coverage. The FRK1080 has been a popular one among fire departments, and we are starting to see a trend toward a more tailored fit and more personal solution.”

Brent Chase, CEO of Chase Tactical LLC, says that just as fire departments are different based on areas covered, their body armor needs are also different because of their geographic location. “South Florida and the Northeast states are polar opposites when it comes to their requirements,” Chase notes. “Around four years ago, California and Florida really started pushing body armor for fire departments and medics because of active shooters engaging them. It started with the fire department SWAT medics and expanded from there.”

Chase says that the ballistic equipment his company sold to Falmouth Fire-Rescue has a Level 4 plate that is National Institute of Justice (NIJ) compliant and can stop an armor piercing rifle round. “All of our plates are multistrike and made in the USA,” he says. “Falmouth also went with soft armor on the cummerbund at Level 3A, which will protect against handgun rounds.”

Brian Brown, regional sales specialist for Angel Armor LLC., says the designers of his company’s body armor “designed a system for rifle protection that can be worn all day. It’s a standard concealable vest with rifle plates in the front and at the back redesigned as a soft armor carrier.” Brown says the system uses ½-inch-thick Level 3 plates that will take a hit from a 7.62-mm or 5.56-mm rifle round. An additional plate can be added to defeat a 5.56-mm green-tip armor-piercing round, he adds.

Brown says that the Grand Prairie (TX) Fire Department recently bought Angel Armor’s RISE 2.0 system for each of its vehicles. “Our system is soft armor with panels and laser-cut MOLLE across the front for attachments,” he says. “You also can wear it as an exterior carrier, and it comes in black, tan, olive drab green, or blue.”

Steve Murphy, product line director for Armor Express, says his company makes the Hard Core FE carrier in two styles: MOLLE webbing platform and Slick model (no MOLLE) in four sizes: medium, large, extra large, and 2 extra large and with a dynamic armored cummerbund for additional side protection. “Each size offers an additional 10 inches in cummerbund adjustment over a standard cummerbund,” Murphy notes, “so that with the four sizes, the Hard Core FE is able to fit multiple personnel.”

Murphy notes that Armor Express also makes the Gen2 Razor™ body armor that is “extremely thin and lightweight based on innovative fabric technology from Twaron® and Dyneema®.” In addition, Armor Express offers three ballistic helmet models: the AEX35, a one-size-fit shell with a strap system for a harness; the AMP-1E one-size-fit shell with a dial retention harness system and upgraded padding; and the AMP-1TP, which has a rail with speed system connection points, advanced padding, and an improved wheel dial harness system for sizing flexibility.

Dave Murry, owner of Fire Armor LLC and a captain at Palm Beach Gardens (FL) Fire-Rescue, says Fire Armor makes the First Responder Carrier for firefighters and EMS personnel. “The carrier is designed as a one-size-fits-most, which alleviates the need to make sure each individual has their own sized vest,” Murry points out. “When worn in conjunction with our NIJ-certified level II or IIIA soft armor panels, it’s the right vest for dangerous domestic calls, and by adding NIJ 0101.06 10- × 12-inch SAPI/ESAPI hard armor plates, it’s the perfect vest for an active shooter/violent incident response. The First Responder Carrier has 70 square inches of reflective tape, to help with identification of personnel in low light situations.” Murry notes the carrier is available in blue, black, red, yellow, and coyote colors.