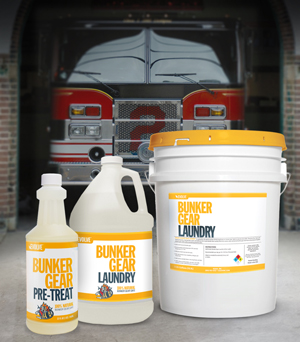 Many firefighters have washed their safety gear with toxic and caustic chemical based laundry detergents that can both weaken fabrics and damage the protectants applied to gear to protect fire fighters. Not only is Evolve an all-natural, plant based cleaning technology, but it is used with cold water eliminating the extensive damage done to fabrics when fire crews have to repeatedly wash their gear in hot water.

The importance of PPE to firefighters’ safety and health is well documented. According to the National Fire Protection Association, hydrocarbon-soiled gear absorbs more radiant heat and is more likely to conduct electricity than clean gear. Heavily soiled gear also is more likely to ignite. Even after washing, smoke and soot deposits of dirty gear can become trapped in fibers, increasing the secondary exposure risk that firefighters will become ill by inhaling, ingesting or absorbing cancer-causing toxins from materials such as petroleum or asbestos, or from communicable diseases from bodily fluids such as blood.

Evolve is the first all-natural cleaner shown to be capable of achieving tested results at a level of efficacy previously seen only through the use of toxic, petroleum-based cleaners, detergents, degreasers and solvents. Evolve’s Active-Capture® technology proactively captures and breaks down soils, grease, grime, odor causing bacteria, and virtually all other unwanted contaminates at the molecular level in seconds, leaving no dangerous residues behind on the surfaces cleaned or in the environment.

These products are 100 percent free of chemicals and ammonia and are specifically designed to remove soil, smoke, grease, and grime on bunker gear, helmets, shields, machines, equipment, and heavy-duty vehicles. Evolve is also being used to remove heavy water scale build-up from fire hydrants during emergencies.

Evolve is proven, lab-tested technology that has been shown to both outperform petrochemicals and eliminate chemical sensitivities. It is VOC-free and meets and exceeds NFPA 1851 compliance requirements.