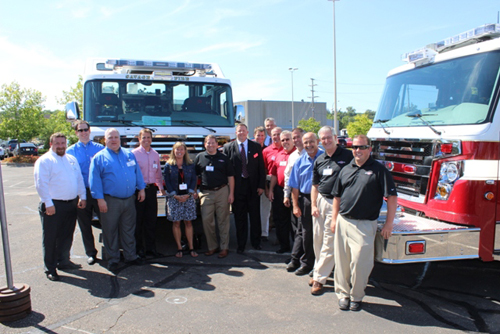 South Saint Paul, MN—On August 22, 2013, Waterous Company hosted the 2013 Minnesota Home Day. With sponsor support from Rosenbauer-America, Physio Control, Image Trend, Emergency Apparatus Maintenance, Foam Pro, and the Minnesota State Fire Chiefs Association, the vision for the 2013 Minnesota Home Day was to simply bring together the triad that represents the Minnesota fire service—Minnesota’s fire chiefs, government leadership, and industry professionals—to take aim at “Unifying the Voice for the Minnesota Fire Service” to communicate and learn the changing landscapes that affect the state’s hometown heroes, and their effectiveness to answer the call.

In conjunction with the Congressional Fire Service Institute (CFSI) and the FAMA/FEMSA (Fire Apparatus Manufacturers’ Association/Fire and Emergency Manufacturers and Services Association), ‘Hill Day’ activities were held this past April in Washington, D.C. Industry professionals are encouraged to hold ‘Home Day’ activities to reinforce and validate the messages delivered to Congress and Senate on issues that are impeding the fire service and industry. For example: The Full Year Continuing Appropriations Act of 2013 (HR 933) funded the Assistance to Firefighters Grant (AFG) program at a level of $337.5 million, far less than the demonstrated need and a 17 percent decrease from FY 2011 funding level of $405 million. Compared to FY 2009 funding ($565 million), this year’s funding level represents a 40 percent cut in this important program.

The event’s keynote speaker, Minnesota State Fire Marshal Jerry Rosendahl, stated, “citizens and elected officials need to become more aware of their fire department’s organization and needs.” Budget issues are affecting our firefighter’s ability to be well-trained and well-equipped to handle the emergencies in our communities. Furthermore, he stated that the fire departments are left to respond to the community needs at the same high level of expectation even though resources have been reduced. In Minnesota, we need “to make sure that a balance of support and resources from Federal, State, and Local levels continues to exist.” Here in Minnesota there are currently 784 fire departments, with over 21,000 firefighters 90% of which are volunteer/part-time.”