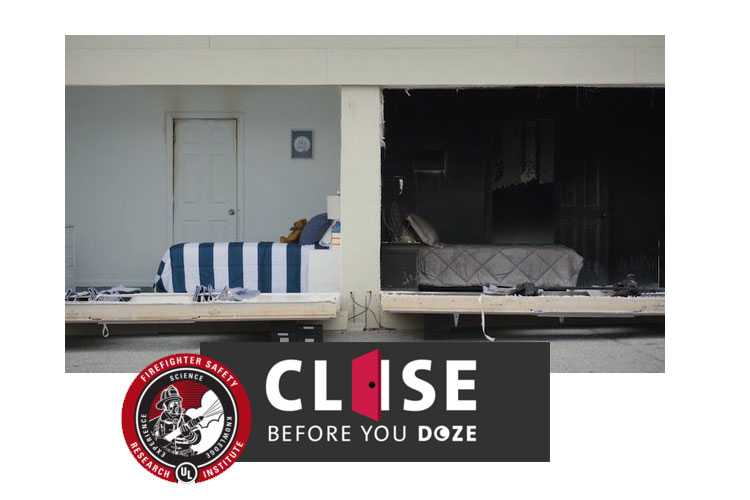 In today’s world, people expect everything to happen fast. A hot meal at the door in 30 minutes or less. Groceries delivered in a matter of hours. Coffee order ready for pickup at the push of a button. In many cases, speed makes our lives a little bit easier. But in the unfortunate event of a house fire, speed is making it significantly more difficult for people to escape their homes. And in many of these cases, that speed is fatal.

The pace at which a fire races through a home has increased at a dramatic and deadly rate. About 40 years ago, people had an average of 17 minutes to escape a burning home after the activation of a smoke alarm. Today, that window has shrunk to about three minutes or less. Natural furnishings and building materials have given way to synthetics, which burn much faster. Combine that with the popularity of open floor plans and it becomes the perfect habitat for an escalating fire.

According to the National Fre Protection Association, there were 379,000 residential structure fires in the US in 2017. As a result, they saw 10,600 civilian injuries and 2,630 civilian deaths.

When conditions allow, this increase in speed must be confronted with an increase in our operational tempo – or more simply: fast fires need fast firefighters. But it also calls for residents to update their fire safety procedures. To help residents maximize their chances of survival during a fast-moving house fire, it’s important for the fire service to drive home the following safety measures:

Each step is extremely important, but the first one – closing your doors every night – could have a lifesaving impact in the event of a fire.

From a firefighter’s perspective, this data also reinforces the importance of confining the fire, isolating rooms, coordinating ventilation, utilizing door control, performing VEIS and sheltering in place, all when conditions allow.

It seems that a day doesn’t go by without news of a residential house fire somewhere in the US. Some are minor with no injuries or casualties, but others are much more severe. This is why it’s so important for all first responders, from firefighters to police officers and 9-1-1 dispatchers, to preach a simple behavioral change throughout their communities – “Close Before You Doze.”

Several years ago, a woman named Lexi King survived a house fire by closing her bedroom door before she went to sleep. Her family, however, wasn’t as lucky. Lexi liked to sleep with her bedroom door closed, but her brother always slept with his open. When an overnight fire destroyed their Texas home, she was the only one to survive. Both her brother and parents died in the fire.

“What I had was a closed door. I had oxygen. I had time to collect my thoughts. I had time to prepare myself,” said King. “There literally is not a day that has gone by that I haven’t thought of them and their beauty that they brought.”

Remember, in the event of a fire we encourage residents to get out and stay out. However, if that’s not an option, sleeping with their doors closed will give them much more time to escape.

Ultimately, the goal is for every family to make sure they close all of their doors – bedrooms, bathrooms and basement – at night in order to starve any potential fire of the oxygen it requires to grow. And as more people start consistently closing their doors, it’s likely that in the event of a fire, more people will be waiting to be rescued by the fire department. With this in mind, it becomes even more important for firefighters to ensure they are thoroughly searching all searchable space within the building as soon as conditions allow.

After a fire starts, there’s very little time to act. Make sure the people in your community know to update their fire safety procedures to ensure they’re covering their bases. If they take these fire safety and prevention steps today, they’ll sleep easier at night.

Becki White is an Assistant Chief with the Eden Prairie Fire Department overseeing the Training and Fire Prevention Divisions.  White has a Master’s Degree in Education from St. Mary’s University and just completed the Executive Fire Officer program with the National Fire Academy.  White was formerly a Deputy State Fire Marshal / Fire and Life Safety Educator with the Minnesota State Fire Marshal Division and an elementary school teacher.  White also serves as the Minnesota representative of the International Association of Fire Service Instructors, an executive board member for the Northland FOOLS, and an advisory board member for Fire Engineering and Fire Rescue magazines and FDIC International conference.

Nick Ledin is a firefighter paramedic with the Eau Claire (WI) Fire Department, currently assigned to Engine 10/Medic 10. Ledin has been a student of the job for 10 years and is an instructor with Chippewa Valley Technical College and Central Lakes College. He’s a contributor to the ‘Firefighter Rescue Survey’, is president of the Northland FOOLS, a co-host of International Perspective on Fire Engineering Blog Talk Radio, and a former technical panel member for UL FSRI’s PPA/PPV Study.

P.J. Norwood is a Deputy Chief Training Officer for the East Haven CT Fire Department and has served four years with the CT Army National Guard. P.J. is a FDIC classroom, workshop and HOT Instructor, Fire Engineering Advisory Panel Member, Fire Engineering book and video author and served on the UL FSRI Technical Panel for the Study of Residential Attic Fire Mitigation Tactics and Exterior Fire Spread Hazards on Fire Fighter Safety. He has lectured across the United States as well and overseas. He is certified to the Instructor II, Officer III, Fire Marshal and Paramedic level.

John Shafer is a 23-year veteran of the fire service and is currently Chief of Training &amp; Safety at the Washington Township Avon Fire Department. John is a recognized instructor who has traveled throughout the U.S. and Canada delivering specialized training programs on Building Construction, Fireground Search, Fire Behavior, Firefighter Safety, and the Close the Door initiative. He has taught nationally at FDIC and other fire industry shows John strives to bring advanced training and new technologies to the Washington Township Avon Fire Department; keeping an open mind when learning about new advancements and discoveries while respecting the historic past of the fire service. John is passionate about sharing his findings with others and one of the ways he does this is through social media. John manages several fire service training pages and is also the founder and editor of greenmaltese.com and is co-owner of firefightertoolbox.com.

Sean DeCrane started his career with the Cleveland (OH) Fire Department in 1991 where he is currently a Battalion Chief assigned to the 3rd Battalion while previously serving as Chief of Training for the Cleveland Fire Training Academy. He is a State of Ohio certified instructor and represents the International Association of Fire Fighters in the International Code Council. He also has served on the 2009 and 2012 International Fire Code Development Committees and is the current committee chair for the 2015 Edition. He was awarded the 2010 International Code Council’s Fire Service Award, the International Association of Fire Chiefs Fire Life Safety Section’s 2013 Fire Service Award, and gave the 2015 FDIC General Session Keynote Speech. DeCrane also serves on the National Fire Protection Association’s NFPA 1 Fire Code Technical Committee. In addition, he serves on the Underwriters Laboratories Fire Council, the U.S. Fire Administration’s Residential Fire Environment Workshop Project, the U.S. Fire Administration’s project on Fire Fighting Tactics in Wood-Frame Residential Construction, and the Modern Fire Environment Education Committee.