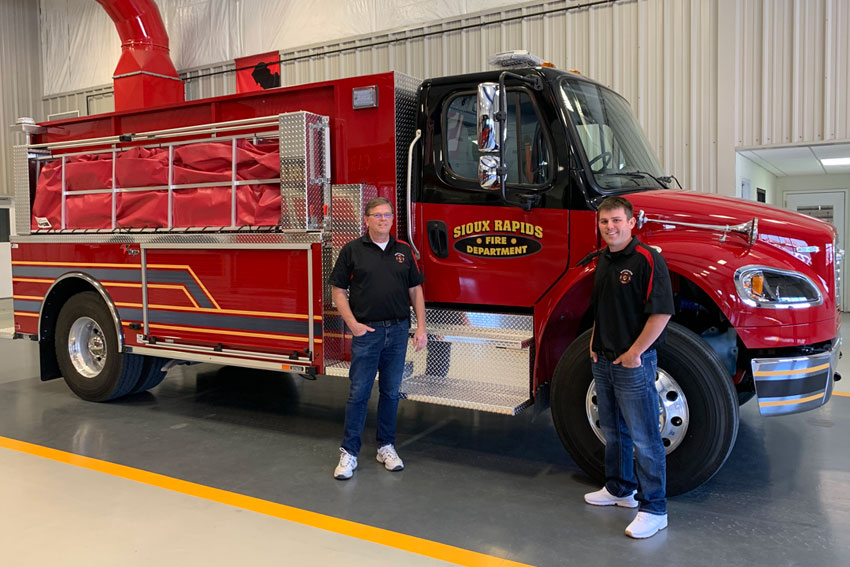 Sioux Rapids, IA—Firefighting is a brotherhood that is surrounded by deep-rooted traditions and a calling to serve and protect others. To a majority in this brotherhood, their fellow firefighter is like family; some indeed are family. For the Sioux Rapids (IA) Fire Department’s (SRFD) father-son firefighters, Chief Scott Scheiber and Captain Brady Scheiber, one of their traditions has come full circle as they visited Toyne, Inc. in Breda, Iowa ,to inspect the department’s latest Toyne Tanker.

This is an all-too-familiar experience for these two men because it isn’t the first time they’ve inspected a new Toyne Apparatus together. In 1995, Chief Scheiber and Brady, six years old at the time, made the trip over to the Toyne campus to examine theSRFD’s custom pumper. While giving the craftsmanship a look-over, the Scheibers captured the moment by taking a photo together (photo 1). After inspection, the father and son rode back to Sioux Rapids in a new Toyne Pumper. Unbeknownst to everyone, the calling to serve would bring these two together in Breda for a second time.

Fast forward 25 years later, Toyne once again had the privilege of working with the SRFD to build a custom tanker apparatus. While the Toyne facilities and apparatus technology have changed over time, physical vehicle inspections remain the standard. When it came time for the Sioux Rapids firefighters to oversee the build construction, two familiar faces arrived in Toyne’s showroom. It was the father and son from all those years ago, a little older and a little wiser. Now, both are firefighters with the Sioux Rapids Fire Department.

It was a humbling, welcomed sight for everyone. Reliving the moment together, Chief Scheiber and Captain Scheiber checked the handiwork; taking the opportunity to snap a picture together in front of the department’s new Toyne (photo 2). Hearkening back to past memories and creating everlasting new ones, they once again climbed into an apparatus cab, started the engine, drove out of the showroom, and rode back to Sioux Rapids—together—in their new Toyne tanker.

Looking back on the experience, Fire Chief Scott Scheiber said, “I know that for me it was a little bit surreal, as Brady, the young boy, I remember him being so excited to get to come to Toyne to pick up the new pumper and then watch him grin from ear to ear telling him that he could ride home with the drivers. That is a memory that will never leave me.”

“For Brady and myself to be coming back together for a truck inspection and picking up the new tanker, after first picking up our first Toyne pumper 25 years ago, it gave me a feeling of pride knowing that Brady is now a captain on our department and how far he has come since his first visit to Toyne as a six-year-old boy in 1995 who always wanted to be a fireman,” continued Scheiber.

Captain Scheiber added, “Coming back to Toyne together to do a truck inspection is a memory I’ll hang on to forever. The inspection was such an awesome experience to be a part of. It was a great feeling coming back. It brought back a lot of memories (from what I remember from 25 years ago)! I remember riding in the ‘95 pumper all the way home. I thought that was pretty neat back then and still do today.”

“Having these two gentlemen back here, looking over the apparatus after two decades is truly moving to witness,” said Michael Schwabe, president of Toyne, Inc. “We build our apparatus to be dependable and trusted, and being able to be a part of making custom trucks that will serve multiple generations of firefighters is fantastic.”

The SRFD has been serving the residents of Sioux Rapids, Iowa, as early as the 1920s. The department operates out of one station and has 23 volunteer firefighters on call. This latest Toyne Tanker will increase their firefighting capabilities as they respond to calls locally and throughout Buena Vista County.