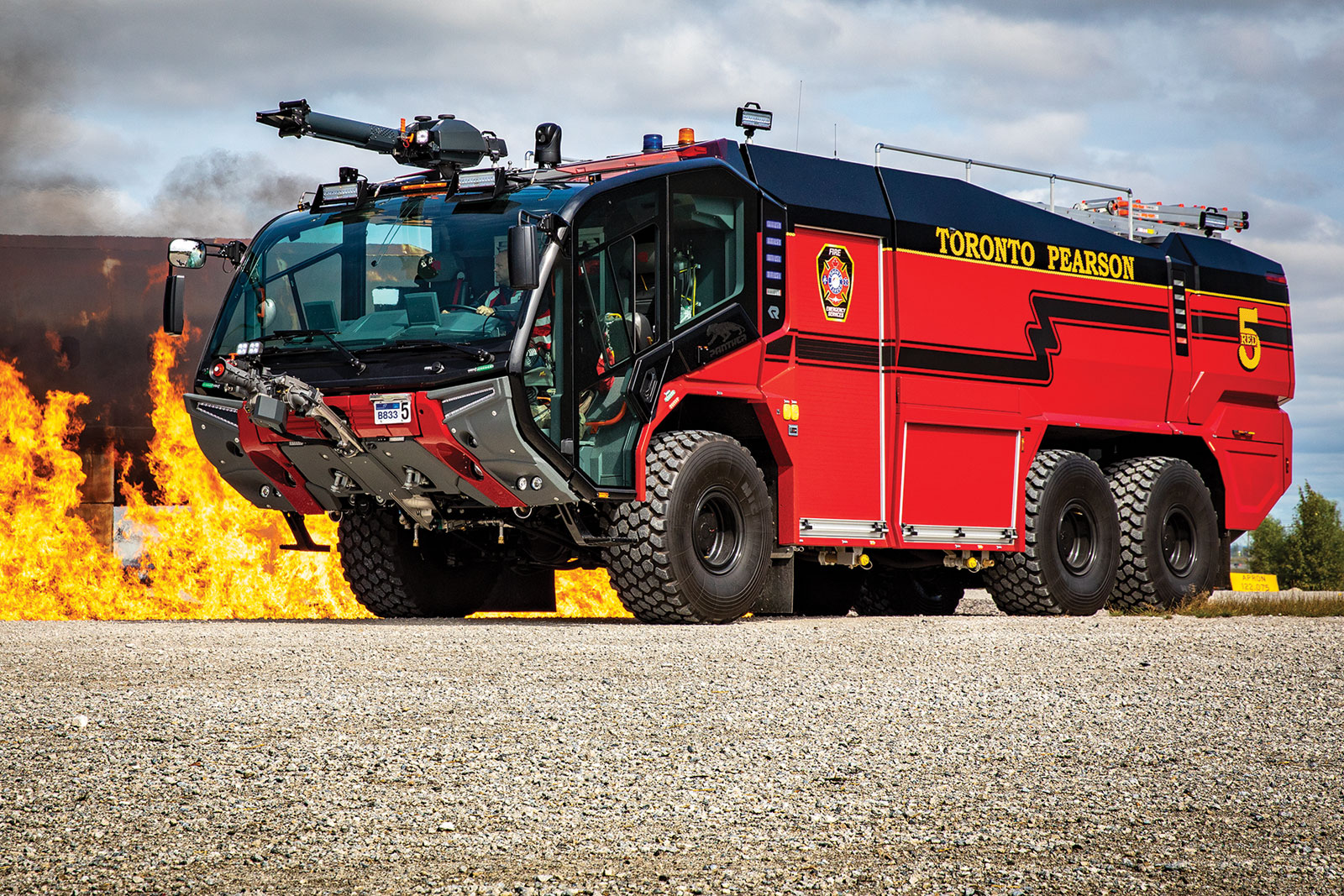 Toronto-Pearson International Airport (YYZ) started the selection process in 2017 for an ARFF vehicle manufacturer to replace its current fleet of ARFF apparatus back in 2017, which coincided with the release of the new Rosenbauer Panther in North America. The airport is a Category nine and the largest passenger volume airport in Canada, serving approximately 50 million passengers per year. The ARFF team at YYZ also runs one of the largest ARFF training facilities in Canada called the Fire and Emergency Safety Training Institute (FESTI). The decision to determine who would be selected to build the ARFF units that would be protecting their travelling public was not taken lightly. The ARFF Department, led by Fire Chief Todd Aitken, put together a team of personnel to conduct a thorough vetting of the available ARFF unit suppliers.

“The team conducted a thorough research and development process to assess which manufacturer best met their needs. Toronto-Pearson utilized a very robust and strict selection process that encompassed functionality, serviceability, innovation, safety, reliability, and effectiveness,” stated David Hollett, deputy chief. Speaking with the Rosenbauer team as well as past and current customers, they were confident the relationship with Rosenbauer would be courteous, professional, honest, and long-term. Hollett noted, “That long-term support and assurance was an influencing factor.”

Once Rosenbauer was selected, the first round of orders was submitted which consisted of an Airwolf C3 and two 6×6 Panthers. Shortly after delivery of these units in the fall of 2019, Toronto-Pearson International Airport, FESTI, and Rosenbauer worked together to hold a joint open house to commemorate the addition of the Panthers to the YYZ ARFF fleet. The units were a huge hit to the visiting departments that were impressed with the advanced technologies, easy, ergonomic driver operations, and power of the Volvo Penta D16 Industrial Engine. Christine McKone, marketing communications manager for Volvo Penta, represented the engine manufacturer at the open house. She noted how impressed her coworkers were when the Panther visited their Chesapeake, Virginia, headquarters during the 2017 Panther U.S. national tour and when watching the Volvo Penta Mighty Jobs series filmed from Hartsfield-Jackson Atlanta International Airport. Actually seeing the truck in action first hand took it to another level. “It was amazing to see our Volvo Penta engine split 700-horsepower and drive a 40-ton truck while throwing water hundreds of feet,” stated McKone.

Building on the positive experience with the first order, YYZ has two more 6×6 Panthers, these with the extendible turrets and Stinger piercing systems, which are scheduled for delivery in July. Christian Kleebauer, CEO of Rosenbauer Minnesota, stated, “The COVID-19 pandemic caused some challenges with production and supply chains, but our dedicated employees were focused and able to keep this delivery on schedule.” Another YYZ order for a 6×6 Panther will be coming in the next few months, and the final 6×6 is planned for the following year. The team is also looking to purchase the Rosenbauer Cockpit simulator system for use at FESTI to enhance their training program. The simulator provides an opportunity to challenge operators with a variety of scenarios, using different types of aircraft with multiple fire locations in assorted weather conditions. Chief Hollett stated, “Only a few firefighters can be actively operating the ARFF vehicle for live fire training; therefore, the simulator would allow us a way to split trainees up and make the most of their training experience.”

The Rosenbauer contract to supply a total of seven ARFF units to Toronto-Pearson International Airport (YYZ) is certainly significant, but it is not the only Canadian project currently in the works. Deer Lake, St. John’s and Moncton International Airports have each recently received 4×4 Panthers. St. John’s will be receiving their second 4×4 Panther in the beginning of 2021 and have plans for a third Rosenbauer unit in the very near future. Moncton just completed a contract to order its second Panther 4×4 later this year. Brian Hackett, senior manager of Airside Operations, spoke about how impressed his team was with the enhancements on the new ARFF vehicles and how happy they were to receive their first Panther. “Our ARFF team has had an extra lift in their step since receiving the Panther and they cannot wait until we place the order for our next Rosenbauer,” said Hackett.

The versatility, performance, and uniqueness of the Panther has paved the way for Rosenbauer’s entrance into other vertical markets as well. Two orders were just received from private industrial companies in the mining and petroleum industries, one for a Panther 6×6 and the second for a Panther 6×6 with extendible turret and Stinger. These orders show the adaptability of the Panther’s off-road firefighting capabilities, making it a valuable asset for a multitude of firefighting applications. “It isn’t just an ARFF truck”, Kann says, “it’s a powerful machine providing firefighters with a number of options to attack different types of fires in very difficult environments.”