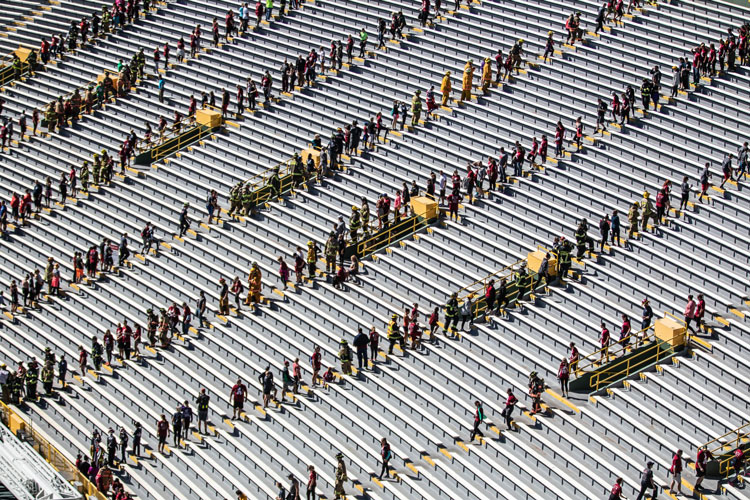 Firefighters, their families, friends and community members from across the nation gathered at historic Lambeau Field on Saturday, September 22nd to participate in the sixth annual 9/11 Memorial Stair Climb. More than 2,700 participants promised to “never forget” by honoring and remembering the 343 New York firefighters who lost their lives on September 11, 2001. This year’s event raised more than $135,000 with all proceeds benefitting the NFFF and has again been recognized as one of the largest stair climbs in the nation.

9/11 Memorial Stair Climb participants had the opportunity to ascend the equivalent of the 110 stories of the World Trade Center while wearing a badge with the name and photograph of one of the fallen firefighters. At the 78th floor, the highest floor reached on 9/11, each climber rang a fire bell in honor of the individual on their badge.

“Since its inception, the Pierce Manufacturing team has been grateful for the opportunity to co-sponsor the 9/11 Memorial Stair Climb along with the Green Bay Metro Fire Department,” said Jim Johnson, president of Pierce Manufacturing. “Not only is it an incredible day of remembrance and reflection, supporting the NFFF helps provide access to critical resources for survivors and co-workers of fallen firefighters.”

Since instituting a partnership with the NFFF, Pierce has helped raised more than $600,000 to support the NFFF’s mission to provide support and resources for the families of fallen firefighters. Through support networks, conferences, workshops and scholarships, the NFFF has lead a nationwide effort to develop and expand programming for the entire fire service community.

For more information about Pierce Manufacturing, the NFFF, and the 9/11 Memorial Stair Climb, visit www.piercemfg.com/climb.

IAFC and Pierce Manufacturing Announce 2018 Fire Chiefs of the Year

So, You Want to Buy a Fire Truck?