Winners are honored for their dedication and leadership in fire and emergency services. Sponsored by Pierce, the 18th annual awards were presented during the opening session at the 2013 International Association of Fire Chiefs (IAFC) Fire-Rescue International Exhibits and Conference in Chicago, Ill.

“We recognize and celebrate the achievements of both Chief Randy Mirowski and Chief Freddy Johnson, Sr. as well as the positive impact they’ve had to their departments, communities and the fire service,” said Jim Johnson, Oshkosh Corporation executive vice president and president, Fire & Emergency. “Pierce is proud to pay tribute to these men for their remarkable accomplishments. All of us benefit from their leadership, dedication and integrity.” 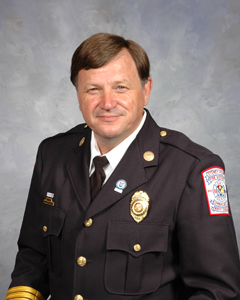 Career Fire Chief Honoree—Fire Chief Randy Mirowski of the Loveland (CO) Fire Rescue Authority
With a career spanning nearly 40 years, Chief Randy Mirowski began as a firefighter with the Topeka (KS) Fire Department. He moved to the Loveland (CO) Fire Department where he served as a driver operator and apparatus maintenance engineer. Mirowski then served at the Poudre Fire Authority, where he spent 27 years rising to become a special operations battalion chief. He rejoined Loveland as its fire chief in 2009. Under his leadership, Chief Mirowski helped build a collaborative relationship between the City and Rural District which resulted in a combined Fire Rescue Authority with increased staffing (from two to three person companies), improved equipment, and an expanded fire station. Dedicated to education and training, Mirowski is chair of the Board for the Front Range Fire Consortium, an organization to support the training and development needs for the Front Range Fire Rescue Departments. He is a member of the IAFC and the International Association of Fire Fighters (IAFF), and is an instructor for the Northern Colorado Fire Consortium. Mirowski’s leadership style and acumen have inspired his staff and others to excel. He has authored and co-authored several training programs on leadership, officer training, procedures, operational directives and more. He holds a Master of Arts, Organizational Leadership from Gonzaga University; a Bachelor of Science, Technology, Education and Training from Colorado State University; and an Associates of Applied Science, Fire Science Technology from Aims Community College. 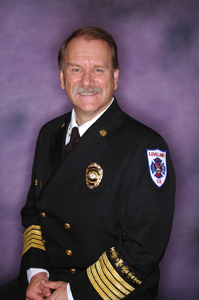 Volunteer Fire Chief Honoree—Fire Chief Freddy L. Johnson, Sr. of the Stoney Point Volunteer Fire Department, Fayetteville, North Carolina
Chief Freddy L. Johnson, Sr. began his volunteer career in the fire service in 1975 and joined the Stoney Point Volunteer Fire Department in 1976, where he rose through the ranks until being named fire chief in 1980. Called “bright, resourceful and driven,” Johnson has led his department to become the only volunteer fire department in the world currently accredited by the Commission on Fire Accreditation International. Improvements spearheaded by Chief Johnson resulted in an ISO rating of Class 3, the only volunteer department in North Carolina to achieve this rating. He led a $1.1 million grant project for a regional interoperability voice system, and advocated for a special tax initiative to fund fire and EMS services. Johnson has followed a dual career path with the United States Army and, after 23 years of honorable service, he retired from the Special Operations Command in 1996. He next joined the Cumberland County Sheriff’s Office where he was promoted to captain and placed in charge of 125 detectives. In 2001 Johnson was named the emergency services director at the Hoke County Sheriff’s Office & Emergency Management, a position he holds today. Chief Johnson was appointed by the North Carolina State Commissioner of Insurance to the North Carolina Fire and Rescue Commission, and has served as president of the Cumberland County Fire Chief’s Association since 1980. He was recognized by the North Carolina Association of Fire Chief’s as its Volunteer Chief of the Year in 2012, and is a recipient of the “Long Leaf Pine”, the highest honor the state offers. He received a B.S. degree from Liberty University and is active in numerous community organizations.